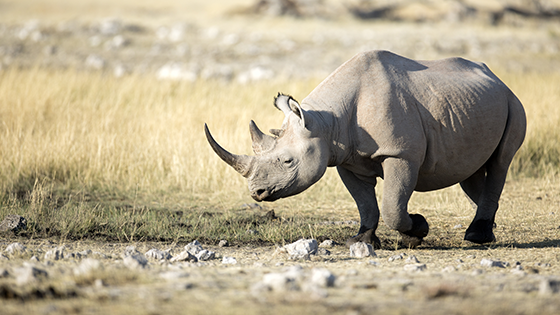 Home  /  Travel   /  The Best Places to See Rhinos in Africa 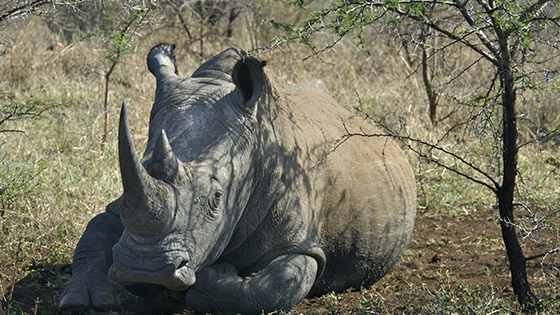 The Best Places to See Rhinos in Africa

Resembling armored refugees from the age of dinosaurs, Africa’s two rhino species are among the most striking of large mammals. The white rhino, Africa’s second-bulkiest terrestrial creature, is a placid square-lipped grass-eater that weighs around 3,750lb. The black rhino, by contrast, is a smaller hook-lipped browser known for its pugnacious temperament.

The names black and white rhino are oddly misleading, since both species are an identical shade of grey (depending to some extent on the color of the local mud or dust). It is thought that their names were extrapolated from a mistranslation of the Dutch ‘wijd’, meaning ‘wide’, in reference to the white rhino’s flattened mouth.

Rhinos have suffered heavy losses as a result of commercial poaching. The main target of poachers is the outsized horn, which is made of compressed hair, and valued in some cultures for making dagger handles, and in others (without the slightest bit of scientific evidence) as medication. As a result, the white rhino is IUCN-listed as Near-threatened, with an estimated global population of 20,000 centered on South Africa, while the black rhino is Critically Endangered, with only 5,000 individuals thought to remain on the planet.

Rhinos feature high on the wish list of most first-time safarigoers, partly because of their scarcity, but also due to their iconic status as one of the Big Five. Fortunately, there are several safari destinations where these fascinating behemoths still roam wild, and these are some of our favorites.

The world’s most important rhino stronghold, South Africa is home to around 90 percent of Africa’s remaining white rhinos, and close to half the global black rhino population. Within South Africa, the province most widely associated with rhinos is Kwazulu-Natal, where a mosaic of state and private reserves comes with a near certainty of good rhino sightings.

Which reserve to visit? Well, a good starting point for self-drivers is Hluhluwe-iMfolozi, a Big Five destination that played a crucial role in saving the white rhino from extinction in the mid-20th century, and that now shelters the world’s densest population of both species. I’d also recommend the inexpensive Pongola Game Reserve for tracking white rhino on foot, Phinda Private Game Reserve for luxurious Big Five safaris that come with a near-certainty of rhino sightings, and the exclusive Zimanga Game Reserve for serious photographers.

We almost chose: Despite the attentions of commercial poachers, Greater Kruger hosts a greater number of rhinos than any other single African safari destination, though on my recent visits, sightings were erratic by comparison to Kwazulu-Natal’s finest. Among South Africa’s private sanctuaries, Tswalu Kalahari Reserve, Madikwe Game Reserve and Kwandwe Private Reserve offer a good chance of spotting the secretive black rhino.

Laikipia is like no other Big Five safari destination in East Africa. A patchwork of upmarket private and community-owned conservancies overseen by the non-governmental Laikipia Wildlife Forum, it extends across 3,600 square miles from the Aberdares to the Ewaso Nyiro River, making it larger than any Kenyan national park other than Tsavo.

Collectively, the conservancies of Laikipia – most famously Ol Pejeta and Lewa Downs – protect Kenya’s largest rhino populations and both species are likely to be seen over a few days’ safari. A special pen in Ol Pejeta houses the world’s last two northern white rhinos, both of which are infertile females.

We almost chose: It’s tempting to punt Lake Nakuru National Park as an affordable rhino-viewing alternative to Laikipia. But that would be to undersell a truly exceptional safari destination. Scenic Lake Nakuru is best known for the hundreds of thousands of flamingos that aggregate there in suitable conditions, but while these have been an erratic presence in recent decades, white rhinos are almost invariably seen grazing on the grassy lake floodplain. A few black rhinos lurk in the denser bush to the south.

One of Africa’s most exciting and exclusive wildlife experiences is the opportunity to track rhinos in the remote wilds of Damaraland. The desert-adapted black rhinos here comprise the world’s largest free-roaming population of this endangered species, and experienced local trackers enjoy a high success rate when it comes to locating them. Other wildlife in this arid region includes Hartmann’s mountain zebra, gemsbok and desert-adapted elephant.

We almost chose: Namibia’s Etosha National Park is better suited to self-drivers than any other major safari destination outside of South Africa. It supports a substantial black rhino population descended from 40-odd individuals translocated from Damaraland in the 1970s, and the odds of a sighting over a few days here are excellent.

Uganda’s Murchison Falls National Park was once an important stronghold for the northern race of white rhino (now, tragically, declared extinct in the wild) and both it and Kidepo Valley National Park formerly supported good numbers of black rhino. By the mid 1980s, no rhinos at all survived in Uganda, due to commercial poaching exacerbated by the lawlessness that prevailed during and after the presidency of Idi Amin.

The good news is that rhinos are back in Uganda, and with a bang! Eight white rhinos introduced between 2001 and 2006 have since bred up to a total of 30-plus individuals in Ziwa Rhino Sanctuary, a 70 sq km tract of tangled bush situated 170km north of Kampala en route to the ever-popular Murchison Falls and Kidepo Valley. Tracking rhinos on foot with the experienced local guides at Ziwa, often to within a few meters, ranks among the most exciting wildlife experiences I’ve had anywhere in Africa. A night or two’s stay here also allows you time to enjoy an early morning canoe safari in search of the enigmatic shoebill and other aquatic birds in nearby Lugogo Swamp.

We almost chose: Southwest Zimbabwe’s Matobo National Park was inscribed as a UNESCO World Heritage Site in 2003 in recognition of its magnificent domed granite boulderscapes and wealth of ancient rock art. But it also supports good concentrations of both black and white rhino, the latter reintroduced in the 1960s on the historical strength of prehistoric paintings preserved at White Rhino Shelter. As with Ziwa, thrilling guided rhino tracking excursions are available here.

If you could make any one criticism of the peerless safari circuit centered on northern Tanzania’s Serengeti, it is that rhinos are absent or scarce in all its major national parks. Fortunately, however, a couple of dozen black rhinos still survive in Ngorongoro Crater, a spectacular volcanic caldera that forms the centerpiece of the scenic highlands protected in the Ngorongoro Conservation Area. Ngorongoro is easily visited en route to Serengeti National Park, and while there are no guarantees, there’s a fair chance of spotting a black rhino on any given game drive.

We almost chose: Botswana’s rhinos were poached to near-extinction in the early 1990s. However, following an extensive post-millennial program of translocations, both species are now present in Moremi Game Reserve and adjacent parts of the Okavango Delta, where you stand a decent chance of encountering a white rhino, but black rhinos remain scarce.