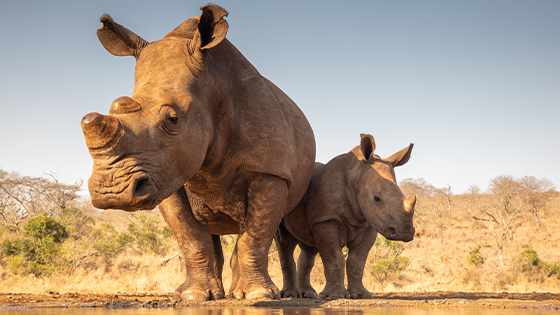 The African safari industry, like most specialist concerns, is riddled with jargon that might be confusing to the uninitiated. First time visitors planning an African safari itinerary may well find themselves trying to figure out the nuanced differences between a rest camp, a fly camp and a tented camp, unsure about which animals constitute the Big Five (or indeed the Little Five, or the Ugly Five), or pondering exactly what is meant by a braai in a boma. So here, we’ve put together a crib sheet including some of the unfamiliar words and phrases you’re like to come across before or during your safari, broken up into terms relating to accommodation types, wildlife, and other more general odds and ends.

Camp – Almost any safari accommodation, though generally, you’d expect a camp to be smaller and to feel more impermanent and/or basic than a lodge.

Campsite – A familiar no-frills European style site where you pitch your own tent.

Fly camp – Unadorned temporary camp, usually set up just for one night to offer guests a genuine unfiltered wilderness experience. In its purest form, a fly camp, as the name suggests, consists of little more than a simple fly-sheet shelter, but these days arrangements are usually a bit more elaborate.

Lodge – Almost any safari accommodation, from the large and rather impersonal ‘hotel in the bush’ establishments that dominated East Africa’s safari industry until the turn of the millennium to the more exclusive and chic bush retreats that are in vogue today. As a rule, any place described as a lodge would consist of permanent stone or wood buildings, making it more attractive to nervous first-time safarigoers than a tented camp.

Mobile camp – A rustic but usually upmarket tented camp that contains no permanent structures and can easily be broken down and relocated, for seasonal or other reasons.

Rest camp – Public accommodation in a national park or other reserves. In southern Africa, many rest camps are like little villages comprising several bandas and cottages, a campsite, and in some cases even a restaurant and/or grocery shop and/or fuel station.

Rondavel – A traditional-style round hut, often relatively basic, usually with a thatch roof.

Self-contained – A room or unit that includes a private en-suite bathroom and toilet.

Self-catering – Accommodation aimed at people who want to cook for themselves, usually with a kitchen that may or may not contain a fridge.

Tented camp – Any accommodation that comprises permanent standing tents. Sometimes the tents stand directly on the ground or a concrete block, but more often they are on a stilted wooden platform with a private balcony. Almost invariably, a tented camp will be relatively small and exclusive, typically comprising 6 to 12 units. Many are very luxurious, others are more basic and aimed at a budget to midrange clientele.

Big Five – The animals that most safarigoers place at the top of their African wish list: lion, leopard, buffalo, elephant, and rhino. Ironically, the term was originally coined by trophy hunters to describe the quarry they considered to be most ferocious and dangerous. The white rhino was not part of the original Big Five as defined by hunters, since it is far more placid than the notoriously bad-tempered black rhino, but few people make that distinction today.

Dagga boys – Old male buffalos that have left or been evicted from a mixed herd, and now hang out together in small grumpy groups.

Diurnal – An animal that is most active by day.

Endemic – A species or subspecies unique to a specific country or region.

Indigenous – A plant or animal that naturally occurs in any given place.

Little Five – Designed to illustrate that there’s more to an African safari than the Big Five, this term refers to an otherwise arbitrary group of relatively small near-namesakes. These are the ant lion (a predatory borrowing insect), leopard tortoise (which can weigh up to 80lb and is common in many safari destinations), buffalo weaver (sociable birds that build scruffy communal nests), elephant shrew (a rodent-like nocturnal with a long twitchy nose) and rhino beetle (a hefty armored bug with a prominent horn).

Nocturnal – Animals such as leopard, bushbaby, and porcupine, which tend to be active at night and are most often seen on night drives.

Ugly five – A grouping created by safari guides to draw attention to five superficially unattractive creatures that can be fascinating and fun to watch. These are the spotted hyena, warthog, wildebeest, marabou stork, and vulture.

Acacia – A family of thorn trees that lend a definite ‘African’ character to many savanna reserves. Common acacias include the swamp-loving yellow fever tree, the flat-topped umbrella thorn, and the shrubbier whistling thorn.

Boma – A traditional enclosure used to protect livestock or a rural community, or an enclosed outdoor eating area at a lodge or camp. The term Boma was also used to describe a fortified administrative building in the colonial era, but the story that it’s an acronym of “British Overseas Management Administration” is the safari equivalent of an urban legend.

Braai – To say this is an Afrikaans word meaning ‘barbecue’ is to understate its social and ritual significance in southern Africa, where most upmarket lodges hold regular evening braais in the boma!

Bush or Bushveld – A loose term, most widely used in southern Africa, that refers to practically any protected savanna or grassland habitat inhabited by big game.

Bwana and Mama – Swahili words broadly similar in meaning to mister and madam – in cases considered a respectful term of address for older men and women.

Concession – A part of a national park or other public reserves that are leased out for exclusive use, usually by one safari operator, lodge, or camp.

Hides – A camouflaged or semi-subterranean shelter for viewing game up close, often located close to the water and designed to facilitate birdwatching and/or photography.

Jambo –  This simplified Swahili greeting is used only in East Africa, it is pretty much ubiquitous in the tourist industry.

Malaria-free – Self-explanatorily, but important if you’re traveling with young children, a safari destination where malaria is permanently or seasonally absent.

Open borders – Usually used in reference to private reserves that share an unfenced boundary with a larger national park or game reserve, allowing wildlife to move freely between the two.

Sundowners – A popular safari ritual that involves stopping for a few drinks at dusk, often at a scenic location or viewpoint.

Traversing rights – Most often used in South Africa where one private reserve allows another to conduct game drives in each other’s territory.

Vlei – seasonal wetland or marsh, often in a valley.