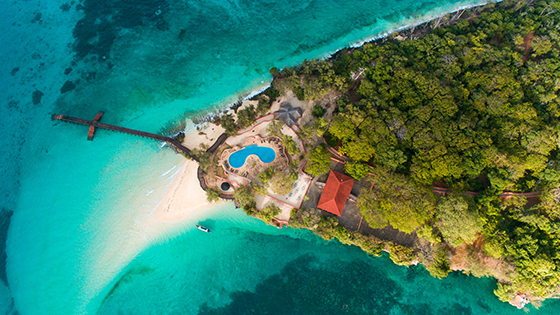 8 Cool Things to do on Zanzibar

The evocatively named island of Zanzibar, set in the Indian Ocean off Tanzania, is East Africa’s most popular post-safari seaside retreat. Dreamy beaches such as Nungwi, Matemwe and Paje offer idyllic conditions for chilling on white sand, below a swaying palm tree, with a paperback or fruity cocktail – while protective offshore reefs ensure safe conditions for swimming, kitesurfing and other watersports.

Yet for active visitors who seek to engage more deeply with the destinations they visit, there is more to Zanzibar than just a standard beach holiday. This island has a rich Swahili culture and history stretching back at least a thousand years, while natural attractions include spectacular coral gardens, gorgeous tropical forests and mysterious sacred caves. Here we outline some of our favorite non-beach activities on East Africa’s legendary Spice Island.

Wander the Alleys of Stone Town

An enclave of traditional buildings run through by a convoluted knot of narrow alleys, Zanzibar’s timeworn Stone Town stands at the historical and cultural heart of East Africa’s Swahili Coast. The ancient waterfront, lined with creaking dhows and their billowing sails, is guarded by the imposing coral rag walls and battlements of the Old Arab Fort, which started life as a Portuguese church in 1598, only to be extended and repurposed by Omani settlers a century later. Elsewhere, you’ll find the multi-story Zanzibari houses inhabited by the likes of Livingstone and Stanley before they launched their explorations into the African interior, and a hulking Anglican Cathedral built in the 1870s on the site of the once-notorious slave market. More than any individual landmark, however, what is most striking about the Stone Town’s labyrinthine alleys is their compelling sense of place, one determined by a unique fusion of African, Arabic, Asian and European architectural and cultural influences.

Although Stone Town is the urban heart of Zanzibar’s rich Swahili cultural heritage, the surrounding countryside is dotted with buildings of historic interest and architectural merit. The oldest of these is Kizimkazi Mosque, inscribed with its Islamic year of foundation (equivalent to 1107 in the western calendar), and still in use today. But the most impressive of the island’s many ruins, only 2 miles from Stone Town, is Maruhubi Palace, which was built for Sultan Barghash in 1882. A harem of around 100 royal concubines lived here prior to 1899 when a raging fire rendered the main building uninhabitable, but surviving features include a Persian-style bathhouse, a lily-covered pool, and the tall pillars that supported the upper story.

This extensive but little-known cave system, also known as Mpango ya Mchekene (Caves of the Hawk), once formed an important site of ancestral worship to the local Zanzibari people. Guided tours of the caves are available, and the going is flat and easy underfoot, but a good torch is essential. A footpath through the longer of the two main caves leads past some truly impressive stalactites, stalagmites and other dripstone formations, and it runs deep enough that if you switch off your torch at the turnaround point, you’ll experience total, absolute darkness – in the rather unnerving company of thousands of bats.

Take a Spice Tour Into the Lush Interior

Zanzibar is also known as the Spice Island in reference to the clove plantations established there by Sultan Said of Oman in 1827. And although it is no longer the world’s largest clove producer, the Zanzibari countryside is permeated by the inviting tropical aroma of drying clove buds during the main harvesting season of September to November. Spice tours into the island’s interior offer the opportunity not only to see the 50ft-high trees from which the cloves are plucked but also the likes of vanilla, nutmeg, cinnamon, pepper, lemongrass and various juicy tropical fruits.

Zanzibar lacks the big game associated with mainland Tanzania, but it is home to one of Africa’s most striking and rarest monkeys. This is Kirk’s red colobus, a cryptically-colored Zanzibar endemic distinguished by the male’s outrageously unkempt snowy-tufted crown. Habituated troops of this delightful monkey can be tracked in Jozani Forest, which forms part of a national park that has been instrumental in the population growth of this endangered species from a low point of around 1,500 in 2004 to more than 3,000 today. Jozani is also the best place to look for the endemic Zanzibari race of the brightly colored Fischer’s turaco, which is slightly larger than its mainland counterpart, and has blue-purple rather than green on the wings.

Snorkel or Dive Off the Mnemba Atoll

Zanzibar’s most rewarding diving and snorkeling destination, Mnemba is a coral islet situated just off the northeast coast of the man island. Although the islet itself is leased as a private lodge, the calm turquoise waters that surround it hide a submarine wonderland protected within a state-managed marine conservation area. Snorkeling excursions to Mnemba focus on shallow coral gardens that support a staggering variety of colorful reef fish, while divers tend to head to steeper drop-offs inhabited by an even greater variety of reef dwellers, as well as marine turtles and deep-water game fish. Pelagic visitors often seen on boat excursions to Mnemba include whale-sharks, manta rays, three types of dolphins, and humpback whales.

Sail by Dhow to Changuu Island

Also known as Prison Island, this coral-rag extrusion in the Zanzibar Channel 4 miles northwest of Stone Town has a checkered history. Once used as a detention center for slaves shipped from the mainland, it later housed a prison and a quarantine for station passengers arriving from India in the 1920s. A traditional dhow trip to the island allows you to briefly experience the Indian Ocean as the ancient Swahili mariners did. Once there, you will find a small beach and snorkeling reef, as well as a colony of giant Seychellois tortoises, descended from four individuals gifted to the governor of Zanzibar in the 18th century. The oldest of these tortoises was born in the 1820s, making it around 200 years old.

A short plane or ferry hop from Stone Town, Pemba is the smaller, greener and less developed of the two main islands that comprise the Zanzibar Archipelago. Few tourists make it here, but there’s plenty to reward those who do. The 30km coral reef system that runs south from Ras Kigomasha headland is probably East Africa’s most pristine diving and snorkeling site. Here you’ll find at least three dozen spectacular individual dive sites, most notably Manta Point, with its huge mushroom and cabbage corals and resident manta rays, and the snorkeler-friendly Aquarium with its abundance of reef fish. Another highlight is the Ngezi-Vumawimbina Forest Reserve, which protects the archipelago’s largest remaining indigenous forest, and provides the last stronghold for four bird species endemic to this one island, namely Pemba scops owl, Pemba green pigeon, Pemba white-eye and Pemba sunbird.