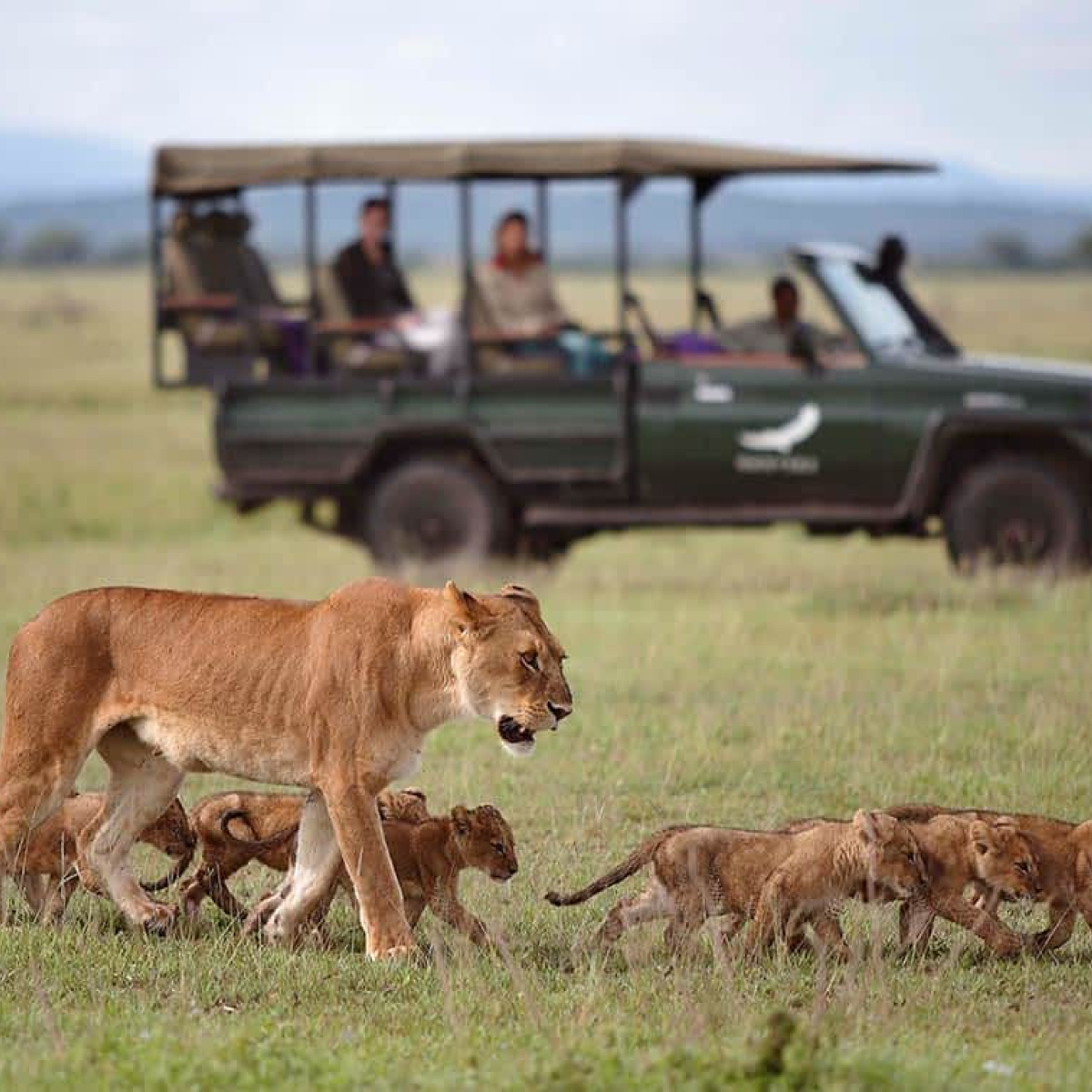 As the arena of Africa’s largest wildebeest migration and hunting ground for incredible densities of lion, cheetah, and hyena, Serengeti-Mara needs little introduction to anyone who enjoys wildlife documentaries. Shared between Tanzania and Kenya, this migratory ecosystem incorporates three of Africa’s most famous safari destinations in the form of Serengeti National Park, Masa Mara National Reserve, and the Ngorongoro Crater, together with a growing number of smaller private and community-owned conservancies. The Serengeti-Mara is also unimaginably vast – at  1,550 square miles, comparable to the State of California) – and more regionally varied, both in terms of ecology and tourist experiences, than many first-time visitors expect. Here we unbox this magnificent ecosystem region by region, starting in the southeastern Ngorongoro Highlands of Tanzania and working our way northwest to the cluster of Maasai conservancies at its northern limit.

Rising to 12,080 ft at Lolmalasin Peak, the volcanically-formed Ngorongoro Highlands divide the eastern Great Rift Valley from the westerly Serengeti Plains. The highlands are protected in Ngorongoro Conservation Area (NCA), a UNESCO Biosphere Reserve and World Heritage Site where traditional Maasai pastoralists still herd their cattle alongside all manner of big game. The NCA’s game-viewing centerpiece, included on pretty much all safaris to northern Tanzania, is the magnificent Ngorongoro Crater, where the Big Five all roam freely in the world’s largest volcanic caldera.

Ndutu and the Serengeti-NCA border (Tanzania)

Running west from the base of the Ngorongoro Highlands is a classic Serengeti landscape of treeless short-grass plains punctuated with rocky, well-wooded koppies (hills). Plains wildlife, from ostrich and eland to bat-eared fox and cheetah, is prolific through the year, but numbers peak between December and April, when migrant herds of wildebeest and zebra congregate around Lake Ndutu for the calving season, attracting an opportunistic entourage of lions, cheetahs and spotted hyenas.

Best for: The February calving season

Site of the Serengeti’s headquarters, Seronera also houses the park’s oldest lodge, busiest airstrip, and a cluster of public and special campsites. As might be expected, it’s the one part of the Serengeti that tends to suffer from slight crowding, especially over March to May, when the post-calving wildebeest herds are present. Despite this, it is worth including on any Serengeti itinerary: the band of trees that lines the Seronera River Valley ranks among the best places in Africa to search for leopards, and lions also take to these trees with unusual regularity.

Best for: Leopards and tree-climbing lions

One of my favorite parts of the Serengeti is the narrow arm of lush savannah that follows the Grumeti and Mbalageti Rivers west almost to the shore of Lake Victoria. The Western Corridor can be busy from late May to early July when several mobile camps set up there in the hope of catching the migration crossing of the Grumeti River. However, few safaris make it this far west at other times of the year. Lion, giraffe, elephant, wildebeest, zebra, and other typical plains animals are common, while local specialties include kongoni antelope, black-and-white colobus, and a unique isolated subspecies of the ground-dwelling patas monkey.

Best for: June crossing of the Grumeti River

This once-neglected northern extension of the Western Corridor effectively operates as a private sanctuary – just five small lodges and camps scattered across 540 square miles of prime game viewing territory – under the South African operator Singita, which has enjoyed exclusive traversing rights there since 2002. Grumeti today employs 600 locals, which has resulted in strong community support and a significant increase in wildlife populations.

Best for: Exclusive bush chic in an untrammeled corner of the Serengeti

The wildly beautiful Lobo area is characterized by vast undulating plains interspersed with spectacular rock outcrops and ribbons of lush riverine woodland. It doesn’t quite match up to the southern Serengeti for wildlife, but low tourist volumes more than compensate. Lobo is known for elephants and large lion prides, and we’ve frequently seen cheetah and serval in the grassland. Wildlife viewing usually peaks over September and October, when the southward leg of the wildebeest migration passes through.

Best for: The precious feeling of having the whole place to yourself

This 1,500-square-mile buffer zone running northeast from Lobo forms an integral part of the wildebeest’s southward migration over September and October. It is inhabited by the pastoralist Maasai, who have granted concessions to several lodges, ranging in extent from a few dozen to a few thousand hectares. The largest and best of these concessions is Klein’s Camp, an exclusive private reserve that offers night drives and guided walks in addition to the usual diurnal game drives.

Best for: Great all-round game viewing in the heart of Maasailand

There’s something truly magical about the little-visited northwestern wedge of grassland that divides the Tanzanian part of the Mara River from the Kenyan border. Effectively a southern extension of Kenya’s legendary Maasai Mara, the area supports prodigious herds of elephant, eland, topi, gazelle, zebra, wildebeest, and buffalo, while lion, leopard, cheetah, and black rhino are all quite regular. The best time to be here is in August or September when large herds of wildebeest frequently cross the river in one direction then the other following local rainstorms.

Best for: Regular wildebeest river crossings over August and September

The Mara and Talek rivers divide Kenya’s legendary Masai Mara into three distinct sectors. The largest and hilliest is the eastern Mara, which offers superb general game viewing and a good chance of spotting all the Big Five. For cost-conscious visitors, this is the most accessible and affordable part of the Serengeti-Mara, but it also has the highest tourist volume due to a large number of lodges and camps within and outside its borders.

I’ve always found the triangle of land that divides the Talek and Mara rivers north of their confluence to be the most rewarding sector of the Masai Mara. Here, it isn’t unusual to enjoy close-up encounters with lions, leopards, and cheetahs in the course of one drive, which isn’t too surprising when you consider it’s where they shot most of the footage for the TV series Big Cat Diaries. The central Mara is also superbly located for catching wildebeest river crossings over August to October. Tourist traffic isn’t as high as in the east, though leopard sightings tend to attract a fair amount of congestion.

Hemmed in by the Mara River to the east and the scenic Oloololo Escarpment to the west, the so-called Mara Triangle is the least developed and wildest part of the national reserve. Wildlife is not quite so prolific as it is further east, but it’s still very good: cheetah and lion are both common, as are elephant and buffalo, and you might well see black rhino near Oloololo Gate. The Mara Triangle also contains a very popular wildebeest crossing point.

Best for: Rhinos and solitude.

Undoubtedly the best way to see the Masai Mara, budget permitting, is to stay in the patchwork of 15 Maasai community-owned conservancies that extend north from its border. These concessions protect a similar range of wildlife to the reserve proper, but since they operate as private sanctuaries, they carry very little tourist traffic and there’s no restriction on driving at night or off-road. The ecological and economic importance of these conservancies is hard to overstate: a collective area of 525 square miles effectively doubles the size of the national reserve, and monthly lease payments to customary Maasai landowners generate income for around 100,000 locals.

Best for: An exclusive variation on the typical Mara safari