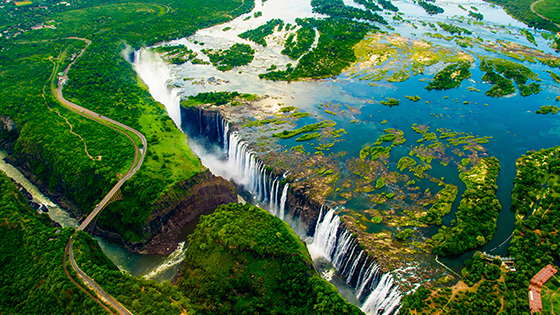 The formation of KAZA dates to 2006, when the five member states signed a memorandum of understanding to coordinate the management of a vast ecosystem centered on the Kavango and Zambezi Rivers. Officially, this TFCA is still something of a work in progress, but even as it stands, it incorporates several celebrated landmarks and is home to an extraordinary volume of wildlife. Almost 200 mammal species inhabit KAZA, including all the Big Five, while the bird checklist tops the 600 mark. Particularly notable is the TFCA’s free-roaming population of 250,000 elephants, which represents about half the continental total.

Here we break down KAZA region by region, describing not only the iconic likes of the Okavango Delta, Victoria Falls and Chobe National Park, but also a host of lesser-known and emerging safari destinations situated within the transfrontier conservation area.

Inscribed as a UNESCO World Heritage Site in 2014, Okavango is a unique safari destination formed by the Kavango River as it seeps into the Kalahari sands to form a 5,800-square-mile inland delta. Mokoro dugout excursions have a truly primal feel, as you glide past hippos and crocodiles through a pristine labyrinth of reed-lined channels, lily-covered pools, expansive swamps and forested islands. The birdlife is fantastic, and game drives and guided walks offer a chance of seeing all the Big Five, with elephants and buffalos being particularly common.

Another UNESCO World Heritage Site, Victoria Falls was namechecked by National Geographic as one of the seven wonders of the natural world. The world’s largest single sheet of falling water, this mile-wide, 350ft-high waterfall boasts a memorable setting on a jungle-flanked stretch of the Zambezi as it runs along border of Zambia and Zimbabwe. Victoria Falls is an unmissable sight, and once you’ve soaked it up – quite literally, if you visit when the water is high – there’s plenty else to keep you entertained, including a 364ft bungee jump and exceptional white-water rafting in the gorge below the falls, and canoe safaris on the placid stretch of the Zambezi immediately upstream.

The 4,500-square-mile Chobe National Park is named after a wide, sluggish tributary of the Zambezi that flows along the border with Namibia. Tourist development is focused on the river, which can be explored on scintillating boat trips as well as on game drives. This is magnificent elephant country, with up to 100,000 individuals crowding into the park over May to September. Other conspicuous wildlife includes lion, buffalo, giraffe, zebra, hippo, a wide variety of antelope, and a dazzling variety of aquatic birds. A trio of concession reserves bordering the park – Linyanti, Selinda and Kwando – are scattered with intimate luxury camps that offer an exclusive variation on the Chobe experience in a wilderness area closed to the general public.

Zimbabwe’s largest national park is easily visited in conjunction with Victoria Falls. The 5,657-square-mile park is renowned for its prolific elephant population, which sometimes peaks at 75,000, though some of the herds disperse across the border into Botswana during the rains. General game viewing is good, too, with big cats particularly well represented. A great self-drive destination, Hwange also incorporates several exclusive concessions offering all-inclusive luxury safaris.

Recently placed under the management of a highly regarded NGO called African Parks, this underrated park protects a grassy stretch of the Zambezi floodplain that can be accessed only by air or by taking a sturdy 4×4 across the river pontoon on its southern border. Liuwa is the arena for Africa’s second-largest wildebeest migration, which usually takes place over October to January. Other wildlife includes lion, cheetah and a population of 500 spotted hyenas. Birdwatching is outstanding, particularly when it comes to marsh and grassland species such as slaty egret, wattled crane, Denham’s bustard, rosy-throated longclaw and flocks of several thousand black-winged pratincoles.

Although the Angolan sector of KAFA remains little known and receives very few visitors, several exciting moves towards raising its conservation status and profile have taken place in recent years. In 2011, the government gazetted two national parks, Mavinga and Luengue-Luiana, covering a contiguous area of 26,500 square miles. The in September 2021, a 20-year management agreement was signed with African Parks, the dynamic conservation NGO responsible for the recent rehabilitation of parks such as Liuwa Plain (Zambia), Akagera (Rwanda) and Majete (Malawi). Watch this space!

The most southerly extension of KAZA comprises a 6,200-square-mile network of dazzling white saltpans. A favorite goal for intrepid 4×4 enthusiasts, the pans are now protected within the Makgadikgadi and Nxai Pan National Parks as well as the smaller Nata Bird Sanctuary. Wildlife viewing is best after the spring rains, when migratory ungulate herds descend on the area and a wealth of aquatic birds includes large flocks of flamingos and pelicans. A year-round landmark associated with Nxai Pan is a beautiful grove of ancient trees known as Baines’s Baobabs after a travelling companion of David Livingstone who painted them in 1858.

Although it doesn’t quite match Victoria Falls in impact, Ngonye Falls further upriver on the Zambezi forms a great overnight stop travelling north to Liuwa Plain. This wide horseshoe-shaped waterfall drops about 60ft over a rock ledge and is most in spectacular in June and July, when the water is highest. It is protected in a small community-run national park that offers guided walks to a number of viewpoints. The surrounding area is also very beautiful, as the Zambezi slices through a rugged gorge of black basaltic rock interspersed rather incongruously with white sandy beaches.

One of the more bizarre geopolitical legacies of the colonial carve-up of Africa is the Caprivi Strip, a narrow panhandle of Namibian territory that extends 280 miles east to divide Botswana from Angola. Unlike the rest of Namibia, Caprivi is quite well-watered, and its mosaic of savannah, rivers and wetlands is protected in a network of five national parks: Bwabwata, Mudumu, Khaudum, Mangetti and Nkasa Rupara. Elephants, buffalos and hippos are prolific here, while other wildlife includes lion, leopard, cheetah, giraffe, zebra and roan and sable antelope. The birdlife is exceptional too, as might be expected of what is effectively a northern extension of the Okavango Delta.

At 8,600 square miles, Kafue is one of Africa’s three largest national parks and it reputedly supports the continent’s greatest variety of large mammals. It is flowed through by the Kafue, Lufupa and Lunga Rivers, all of which form part of the Zambezi watershed, and its cover of dense Brachystegia woodland is interspersed with tracts of seasonally inundated grassland such as the Busanga and Nanzhila floodplains. These floodplains are the most productive part of the park for game viewing, but can only be visited during the dry season, when you’re likely to see cheetahs, lions and a wide diversity of antelope. An outstanding feature of Kafue is the herds of several hundred elephant that regularly gather on the grassy shores of Lake Itezhi-Tezhi.