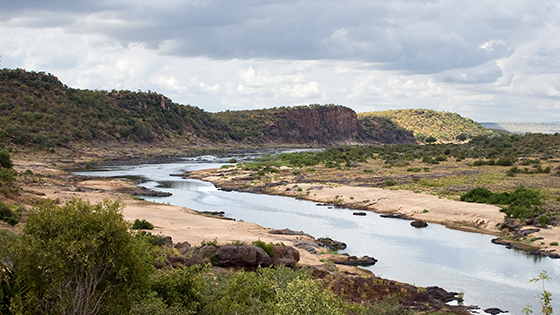 South Africa’s Greater Kruger is one of Africa’s most extraordinary safari ecosystems. In scale, it’s more like a small country than a typical conservation area. Its core component, the state-managed Kruger National Park, extends across 7,576 square miles, an area roughly comparable to Israel or West Virginia. A cluster of private reserves sharing unfenced borders with the national park extend this ecosystem west by 1,350 square miles. Further afield, the creation of the Great Limpopo Transfrontier Park in 2001 has allowed Kruger’s wildlife to resume movement along ancient migration routes into Zimbabwe and Mozambique.

It isn’t just Greater Kruger’s scale that makes it special. A total of 149 mammal species, ranging from cheetah, hyena and African wild dog to zebra, hippo and giraffe, is more than you’ll find in any other Africa national park. For birders, a checklist of 517 species represents more than 60 percent of South Africa’s national total and includes everything from outsized ostriches and eagles to comical hornbills and dazzling rollers and bee-eaters.

Kruger is the last place on earth to host viable breeding populations of all of Africa’s iconic Big Five. It is home to roughly 2,000 lions (10 percent of the continental total) and 1,000 leopards, while buffalo and elephant populations have both doubled since the turn of the millennium to stand at more than 45,000 and 20,000 respectively. Despite a recent outbreak of commercial poaching, Kruger also supports at least 7,000 white rhinos and 600 black rhinos, making it the world’s most important stronghold for these endangered creatures.

Paradoxically, while Greater Kruger forms a cohesive ecological unit, one where animals are free to move as they please, it is altogether more piecemeal in terms of management and tourist usage. The national park itself is informally divided into southern, central and northern sectors, each quite different in feel. Within the park, several private concessions have been leased to individual concessionaires. Bordering it, a cluster of private reserves is split into a mosaic of smaller properties with complex networks of traversing rights. It can be baffling to newcomers, so here we unbox Greater Kruger to help you come to terms with it all.

The private reserves bordering Kruger incorporate some of the world’s most prestigious safari real estate. All operate on a broadly similar basis. Accommodation is in small tented camps and bush lodges, each typically comprising 6 to 20 units, that are almost invariably exclusive in feel, and in many cases positively exude luxurious safari chic. Packages usually include all meals and guided game drives in an open 4×4, while some also offer guided bush walks and include beverages such as beer and house wine. Guiding standards are high, animals (including leopards) are very habituated, and off-road and nocturnal driving is permitted, all of which adds up to some of the best wildlife viewing anywhere in Africa.

Allow yourself two or three nights in any of these private reserves, and you’re more than likely to see all the Big Five at close quarters, as well as cheetah and possibly African wild dog. My experience over many visits is that Sabi Sand (which includes Sabi Sabi, Londolozi, Singita and Ulasaba) is exceptional for those who want to be reasonably sure of ticking off the Big Five in the shortest possible time. At the opposite end of the scale, Klaserie stands out for its low tourist volume and untrammeled feel, whilst still often offering great Big Five sightings. It’s perhaps unfair to single out any one reserve at the absolute pick, but my nomination would be MalaMala, which offers the best of both the above worlds, and routinely throws up incredible leopard sightings.

A dozen or more upmarket lodges operate in different exclusive concessions within the Kruger National Park. In most respects, these concessions function much like private reserves, each hosting between one and three small camps where packages include guided game drives in open 4x4s. Guiding standards are comparable to private reserves, and there is generally a lot less tourist traffic, but wildlife tends to be more scattered and less habituated, so game viewing is more erratic. In my experience, the standout Kruger concessions are Singita Lebombo for scenery, super-luxurious accommodation and top class guiding, Rhino Post for its thrilling overnight walking safaris, and Jock Safari Lodge and Shishangani for accessibility and general Big Five viewing.

The main body of Kruger operates very differently to the private reserves and concessions. It is geared mainly to self-drive safaris, thanks to an extensive network of all-weather roads and family-friendly rest camps equipped with self-catering huts, camping sites, shops, restaurants and filling stations. Self-driving Kruger is highly affordable, and ideal for people who enjoy traveling autonomously, but it has several drawbacks too. These include the lack of a guide’s experienced wildlife-spotting eyes, the inability to follow animals off road, and a tendency for any notable sightings – especially big cats – to attract a crush of vehicles jostling for the best photographic angle.

Given that that you’d need at least 10-12 days to explore this vast park from south to north, self-drivers should give some thought to which sector they visit. Most safaris concentrate on the area south of the Sabie River, due to its relative proximity to Johannesburg, its large number of camps, and a justified reputation for good wildlife viewing. If you’re looking to avoid the crowds, however, the central region, between the Sabie and Olifants Rivers, tends to be less busy and still hots plenty of animals. By contrast, wildlife densities are much lower in the vast tract of bush running north from the Olifants River, but many – myself included – feel that the relatively untrammeled bush atmosphere (and outstanding birdwatching) more than compensate.

Bounded by the Luvuvhu and Limpopo Rivers, this atmospheric wedge of tropical bush was annexed to Kruger in 1969, only for ownership to be restored to the expelled Makuleke community in 1998. Public access is all but restricted to guided game drives operated by a pair of smart private lodges set on land leased from the community. Elephant and buffalo aside, this most northerly chunk of Greater Kruger isn’t prime Big Five territory, but the wilderness aura sets it apart. Highlights include the spectacular Lanner Gorge, the fever-tree forest at the Luvuvhu-Limpopo confluence, and the hilltop ruins at Thulamela, a 16th-century stone-wall village reminiscent of Great Zimbabwe.

Zimbabwe’s Gonarezhou and Mozambique’s Limpopo National Park, the main cross-border components of Great Limpopo Transfrontier Park, receive few visitors compared to Kruger but are worth considering if you want to get right off the beaten track. Gonarezhou, a scenic park known for its healthy elephant and African wild dog populations, can only be entered from within Zimbabwe so logistically it doesn’t function as an extension of Kruger. By contrast, Limpopo National Park is most often visited via northern Kruger’s remote Giriyondo border post; wildlife volumes here are very low, but you will most likely have it to yourself, and activities include guided walks, canoeing and a self-drive 4×4 eco-trail.