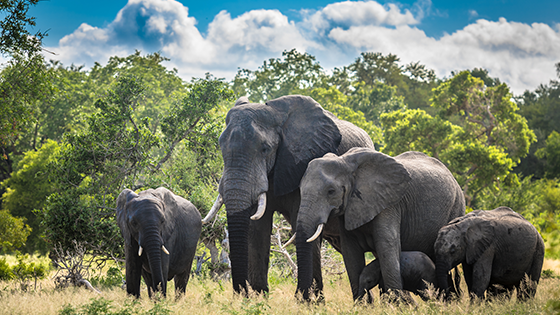 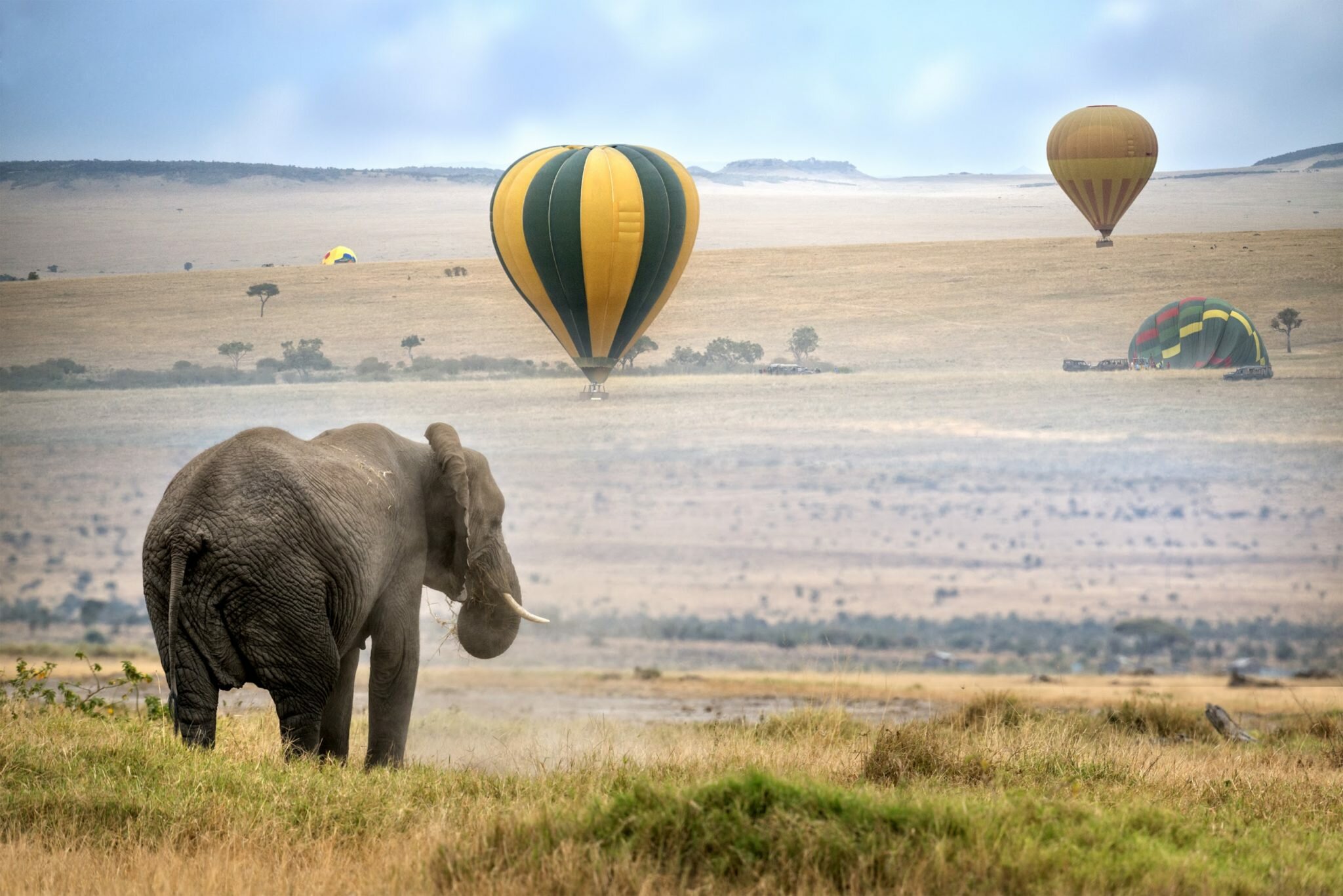 Twelve amazing things you might not know about African elephants

Twelve amazing things you should know about African elephants

Elephants are perhaps the most intelligent, sociable and playful animals you’ll encounter on a typical African safari, and they’re highly entertaining to watch. Here we highlight some of the most interesting facts about these unique and wonderful giants.

The African elephant is the world’s largest terrestrial mammal

A fully grown male typically has a shoulder height of 10-12ft and weighs up to 13,000lb. The tallest individual on record was almost 14ft at the shoulder, while the bulkiest weighed 23,000lb – 50% more than the heaviest recorded Asian elephant, and equivalent to 115 human males.

Elephants are unique in possessing an elongated trunk

A modified fusion of the nose and upper lip, an African elephant’s trunk is up to 8ft long and incorporates 8 pairs of muscles and 150,000 fascicles. A trunk has multiple use – it can reach into high branches for leaves, shake tree trunks to dislodge fruit, or suck up water. This versatile appendage is also used for play, during courtship, to greet, and in dominance displays. When faced with an unfamiliar situation or potential threat, a herd will often raise their trunks (which contain olfactory organs) and move them around slowly to investigate further.

An elephant’s tusks are elongated incisors that grow continuously throughout its life. The heaviest tusk on record weighed 258lb while the longest measured around 11ft. Most elephants are either right- or left-tusked, with the master tusk usually being shorter and having a more rounded tip as a result of wear and tear. Tusks are used, among other things, to dig for salt and water, to tear the bark off trees and pulp the wood inside, to clear away obstructions, and more occasionally in defence. Elephants can survive without tusks; these days, up to 30% of the elephant population in some areas is tuskless as a result of selective breeding influenced by commercial ivory poaching.

The core unit of African elephant society is the matriarchal herd, which comprises a multi-generational group of closely related females led by the eldest member. Elephant cows almost invariably remain in their birth herd for their entire life, but young bulls are kicked out in their early teens, after which they usually roam around alone or form small impermanent bachelor herds.

As with humans, African elephant cows reach sexual maturity in their early teens, after which they typically give birth at five-year intervals until they reach their late 50s. The gestation period is 21-22 months, labour might endure for more than 10 hours, and a calf weighs around 200lb when it drops. Unlike animals that produce more regular or greater numbers of offspring, every individual elephant calf represents a major genetic investment to its mother and her matriarchal herd. For this reason, the entire herd will maintain a vigilant watch over a newborn calf until it has grown large enough to be safe from predators – which it does at a rate of around 2lb daily.

It was once assumed that elephants’ aural communication was limited to the occasional displeased bout of terrifying trumpeting. It’s now known, however, that most elephant communication uses frequencies that are inaudible to people. These subsonic rumblings travel through the earth and are picked up by the skin on the trunk and feet, allowing dispersed herds to coordinate movements over a vast area. It was long thought that elephants infrasound was created by tensing and relaxing larynx muscles in a manner similar to a purring cat, but recent research indicates that these are genuine vocalisations, comparable to human speech or singing.

The African elephant spends around 15 hours daily consuming up to 400 lb of grass and other vegetarian fodder. An adult also needs to drink around 50 gallon of water daily. A thirsty herd will typically arrive at a water source a few hours after sunrise, and might linger until late afternoon on a hot day. Elephants also often wallow in the water to keep cool, or spray themselves using their trunk.

The African elephant’s inefficient digestive system causes 50% of its food to be defecated undigested. The fibrous dung is often burned by local people as a mosquito repellent, and it’s also used by several community projects to make funky eco-friendly paper products. On safari, you might well see dung beetles rolling around the small balls of elephant dung in which they lay their eggs. Mongooses and other small carnivores like to forage through elephant dung in search of the insects that live in it, as do many different types of bird.

Where people go through two sets of natural teeth in their lifetime, elephants have five, each of which replaces its predecessor every ten to 15 years. The last set of teeth usually starts to wear down when the animal reaches its early 60s, forcing it to seek out relatively soft food such as wet grass and aquatic vegetation. Wild elephants usually die of starvation in their late 60s, when the teeth are completely useless, but captive individuals regularly reach an age of 80-plus.

There are two distinct types of African elephant

Recent DNA analysis has confirmed that the African bush elephant and smaller African forest elephant are distinct species that diverged more than 3 million years ago. The species you’ll see on most safaris is the bush elephant. This ranges widely throughout eastern and southern Africa, and is IUCN-listed as Endangered due to a dramatic decline in numbers from perhaps 4 million individuals in the late 19th century to around 400,000 today, mainly due to ivory poaching. The African forest elephant, a west African species whose range extends into parts of western Uganda, is listed as Critically Endangered.

Early humans lived alongside a wide variety of elephants

Elephants, the only extant members of the family Proboscidea, evolved from the same aquatic or semi-aquatic ancestors as manatees and hyraxes. Fossil evidence suggests that global elephant diversity peaked as recently as a million years ago, and our human ancestors were responsible for the extinction of at least a dozen species. These include the woolly mammoths that survived in the Arctic until 1500 BC, the hog-sized dwarf elephants that inhabited several Mediterranean islands until a few thousand years ago, and the North African elephants on which Hannibal crossed the Alps.

Elephants always have the right of way

The African elephant poses a unique danger on safari insofar as it is the only animal strong enough to overturn or tear open a car and inflict damage on the passengers. Fortunately, such incidents are very rare, not least because most safari drivers know to back of when an elephant shows signs of agitation. As a rule, elephants are most edgy in areas when they’ve recently experienced poaching, but very relaxed in places areas where people aren’t perceived as a threat. Almost any male elephant could attack unprovoked when it enters musth, a periodic condition – recognisable by the thick secretion discharged through the temporal ducts – whose name derives from a Hindi word meaning madness. Likewise, a female with a young calf can be unpredictable. Always treat elephants with respect and give them space.