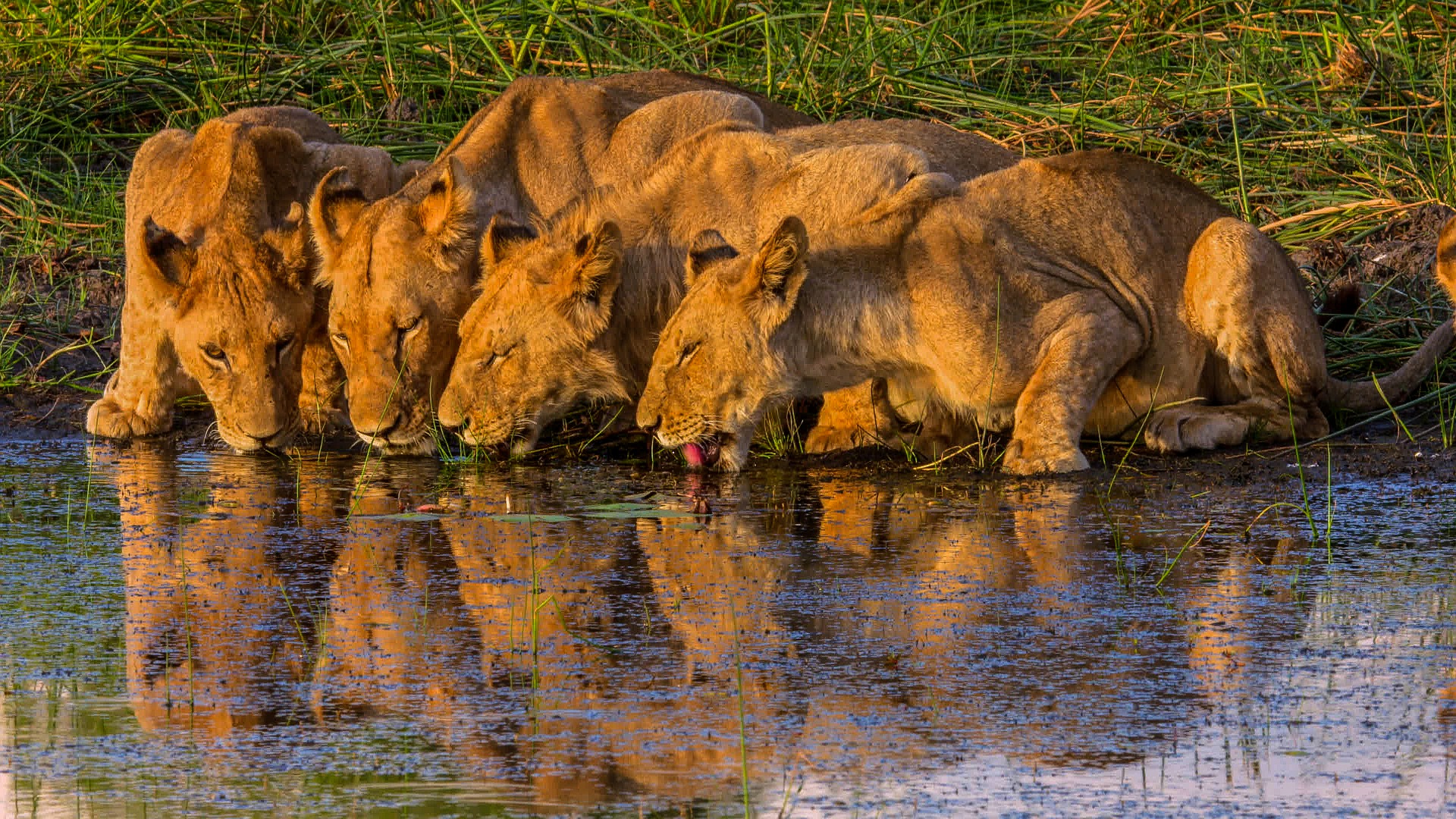 Many South African wildlife enthusiasts rate Botswana as the ultimate African safari destination. It isn’t difficult to see why. One of the world’s most thinly populated countries, Botswana is dominated by the sandy soil and semiarid thornscrub of the Kalahari, a region far better suited to indigenous animals than it is to livestock. Yet, paradoxically, while the name Kalahari derives from the seTswana Kgalagadi (‘Waterless Place’), Botswana actually boasts some seriously impressive aquatic habitats in the form of the immense Okavango Delta, the elephant-lined Chobe River and the seasonal Makgadikgadi Pans. It’s an amazing country, whether you visit as a side trip from the nearby Victoria Falls, as a self-drive 4×4 expedition from South Africa, or as a holiday destination in its own right, and here we introduce a selection of its most alluring safari destinations.

A safari destination like no other, Okavango is a watery wonderland formed as the Kavango River fans out into the Kalahari sands to form the world’s largest inland delta. This 5,800-square-mile labyrinth of channels, swamps and islands was inscribed as Botswana’s second UNESCO World Heritage Site in 2014 on account of its pristine ecology and rich wildlife. All the Big Five are present, as well as cheetah and African wild dog, and the waterways form an important refuge for aquatic birds such as African jacana, African pygmy-goose and the near-endemic slaty egret. The most exciting way to explore Okavango is on hippo-dodging mokoro dugout excursions, propelled by a local poler, but game drives and guided walks are also available at most lodges. Where much of the delta is carved up into private concessions that operate on a high cost, low impact model, the 1,900-square-mile Moremi Game Reserve on the eastern floodplain is suited to intrepid self-drivers.

At 4,500 square miles, Chobe is one of Africa’s largest national parks. It is named after a wide tributary of the Zambezi that forms a focal point for boat trips and game drives as it flows along the border with Namibia. Here you are likely to see lion, leopard, buffalo, giraffe, zebra, hippo and localized antelope such as red lechwe, puku and sable. There are no rhinos, but the park supports up to 100,000 elephant over May to September. Most safari activity is concentrated near the gateway town of Kasane, which is a great base for boat trips and riverside game drives. The more remote Savuti sector is one of the few places in Africa where lions regularly prey on elephants.

Part of an unfenced ecosystem that connects the Okavango to Chobe, this trio of concessions epitomizes Botswana’s high cost, low impact ecotourism model. Much like private reserves, each of the concessions contains a handful of intimate luxury camps that provide expertly guided day and night game drives in a tract of wilderness closed to the general public. Elephants are most numerous from May to October, while resident carnivores include lion, leopard, cheetah, African wild dog, brown hyena, aardwolf and bat-eared fox.

The 20,000-square-mile Central Kalahari may be the world’s largest game reserve but it doesn’t score highly as a conventional safari destination. True, there are substantial numbers of cheetah and black-maned Kalahari lion, along with dry-country antelope such as oryx, springbok and red hartebeest. But elephant, buffalo, rhino and hippo are absent altogether, and most other species are very thinly distributed. All the same, intrepid 4×4 self-drivers love the reserve for its starkly beautiful scenery and remote wilderness atmosphere.

This unfenced 960-square-mile annex of Central Kalahari is a popular retreat from the capital Gaborone, 150 miles to the southeast. It was created in 1971 on community land owned by local San and Bakgalagadi people who now live on its periphery. Khutse protects a similar arid habitat to the Central Kalahari, but the seasonal pans alluded to in its name (literally ‘place to kneel down to drink’) are now supplemented by pumped water holes to ensure good year-round game viewing. Look out for lion, leopard, cheetah, brown hyena, giraffe, springbok, oryx, wildebeest and greater kudu.

One of Africa’s most magical and underrated private reserves, untrammeled Mashatu comprises 120 square miles of grassy plains, sandstone ridges and forested riverbeds extending northwest from the confluence of the Limpopo and Shashe. Serviced by four exclusive camps, it is renowned for its dense elephant population and exceptional lion, leopard and cheetah viewing. True, there’s no rhinos or buffalos, but Mashatu is very much about a holistic wilderness experience, and spending time with quality sightings, rather than chasing around in search of the Big Five.

Six miles south of Gaborone, Mokolodi is a small private reserve created in 1994 on former ranchland. Restocked with wildlife that occurs naturally in this part of Botswana, it now doubles as a rhino breeding facility and an environmental education center that attracts 9,000 schoolchildren annually. Of course, Mokolodi feels tame coming from the wilderness of northern Botswana, but it makes for an attractive overnight alternative to urban Gaborone, and activities include rhino and giraffe tracking on foot.

This 1,500-square-mile national park protects the southwestern portion of a field of saltpans that once formed part of a lake larger than Switzerland is today. For most of the year, it’s a bleak landscape of blinding white salt crusts, ventured upon only by the occasional shimmering ostrich, springbok or oryx. Come the spring rains, however, and the cracked pans transform into seasonal lakes fringed by fresh grassland that attracts large migratory herds of springbok, wildebeest and zebra, together with the big cats that prey on them. A visit to Makgadikgadi needs to be timed carefully, but if you get it right, it’s an incredible phenomenon.

The 1,025-square-mile Nxai Pan National Park forms part of the Makgadikgadi saltpan complex, together with large tracts of Kalahari grassland and savanna. As with the other pans, it presents a bleak and windswept visage for most of the year, but the rains transform it into a mosaic of shallow wetlands and grassland that form a breeding ground for wildebeest, zebra, eland and other wildlife. A non-seasonal landmark associated with Nxai Pan is Baines’s Baobabs, a beautiful grove that has barely changed in appearance since it was painted in 1858 by Thomas Baines, a companion to David Livingstone on the expedition that led to the Europeans ‘discovery’ of Victoria Falls.

Ranking among Africa’s largest conservation areas, this 15,000-square-mile transfrontier park was created in 2000 when Botswana’s Gemsbok National Park officially merged with South Africa’s Kalahari Gemsbok National Park to form a single cross-border ecological unit. Predictably, the park’s South African component is more accessible, busier and better developed, but its counterpart in Botswana is larger, wilder and more alluring goal to adventurous 4×4 self-drivers. As is the case with other conservation areas in southern Botswana, the remote semi-desert scenery is at least as much of an attraction as the wildlife, and the absence of elephant, rhino and buffalo makes it a poor choice for those hoping to tick the Big Five. That said, Kgalagadi is particularly rewarding when it comes to carnivores such as lion, cheetah, bat-eared fox, brown hyena and other carnivores.