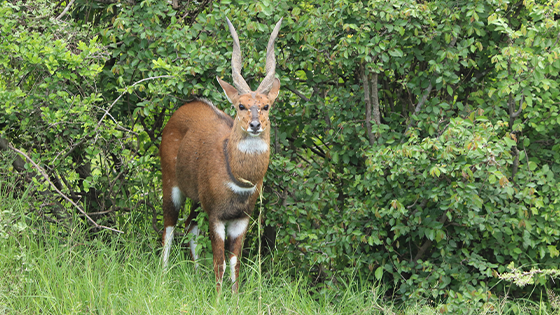 Home  /  News   /  The Spectacular Spiral-Horned Antelopes, and Where to See Them on an African Safari

The Spectacular Spiral-Horned Antelopes, and Where to See Them on an African Safari

Unique to sub-Saharan Africa, the spiral-horned antelope – a family whose best-known members are the outsized eland, the elegant greater kudu and the Bambi-esque bushbuck – are also known as Tragelaphines, after a mythical goat-stag composite creature the ancient Greeks called the tragelaph. This endemic African family is represented by nine different species, all of which display a high level of sexual dimorphism, with females being significantly smaller than males and lacking their trademark spiraled horns. Surprisingly, although spiral-horned antelope are superficially similar to true antelope and deer, and often occupy similar ecological niches, they are far more closely related to buffaloes, bison and cattle. Here we provide an overview of these spectacular safari favorites, and some hints about where you’re most likely to see them.

The eland is the world’s largest and most ox-like antelope. Two species are recognized, but only one occurs in the popular safari destinations of eastern and southern Africa (the other is confined to West Africa). Weighing up to 2,000lb, this gregarious antelope has a heavy build, a prominent dewlap, relatively short but heavily-spiraled horns, and indistinct white stripes on its tan-grey coat. A unique attribute of the eland is the far-carrying clicking sound made by its hooves when on the move. Elands were the most revered of antelope by the hunter-gatherers who once inhabited southern Africa, and they feature prominently in shamanic and other rituals depicted in the region’s ancient rock art.

Where to see it: Associated with open habitats, elands are common in Tanzania and Kenya’s cross-border Serengeti-Mara ecosystem, and in South Africa’s uKhahlamba-Drakensberg Park, which also houses a proliferation of prehistoric rock art depicting these handsome creatures.

Many people, myself included, consider the greater kudu to be the most majestic of all antelope. A fully-grown adult male, with its thick beard, striped grey-brown torso and double-spiraled 6-foot horns, is a truly imposing sight. The greater kudu is one of the world’s largest antelope, attaining a shoulder height of 5ft and weighing up to 695lb. Adult males are usually solitary, while females and subadults move in herds of up to 10.

Where to see it: This is one of the most conspicuous antelope in the Kruger National Park and many other parts of Southern Africa. In East Africa, where the population has never recovered from a 19th century rinderpest epidemic, it is most common in Laikipia (Kenya).

This Near-threatened antelope resembles a scaled down greater kudu, with smaller but still significant spiral horns. Smaller, shyer and more localized than the greater kudu, it is usually seen in small herds that flee at the approach of a vehicle

Where to see it: Cobfined to semiarid Acacia woodland in Tanzania, Kenya and Ethiopia, the lesser kudu is common but skittish in Tsavo, Samburu-Buffalo Springs and Ruaha.

Africa’s answer to Bambi is the bushbuck, which also happens to be the continent’s second-most widespread antelope, after the tiny common duiker. Bushbuck display such a high level of geographic diversity that more than 30 regional subspecies have been described. The striking ram has large spiraled horns and a dark red-black coat, while the smaller ewe is hornless, and pale chestnut in color. Both sexes have a white throat bib and usually some spotting and striping. Males tend to be solitary, but females are sometimes seen with a single calf.

Where to see it: Bushbuck might be seen in almost any wooded habitat. They are particularly common in riverine forest and thicket, but emerge into grassy clearings when relaxed, and are present in some unprotected areas where few other large mammals survive.

This remarkable semi-aquatic antelope is a niche species associated with swamp interiors. The male resembles a bulkier, shaggier and longer-horned variation on a bushbuck. Unlike most antelope, the sitatunga is a strong swimmer. Its distinctive spreadeagled stance and unique split hooves are adaptations to it its watery home.

Where to see it: The sitatunga is widespread in swampy habitats but seldom seen. Of Africa’s major safari destinations, it is most regular in Botswana’s Okavango Swamp. Minor national parks where sitatunga can be observed from custom-built hides are Saiwa Swamp (Kenya), Rubondo Island (Tanzania) and Kasanka (Zambia).

The nyala is one of the world’s most handsome antelope. Larger than a bushbuck, the ram has long yellow-tipped horns and a lustrous grey-black coat offset by a dozen white stripes, some spotting, a bold V-shaped patch below the eyes, and orange-yellow lower legs. Given that it is confined to hot and humid coastal climates, the male nyala is unexpectedly shaggy, with a white spinal mane that bristles erect during dominance displays (a regular occurrence when two rivals meet). The smaller female is so different in appearance – white stripes on a tiger orange background – you could be forgiven for thinking it is another species altogether.

Where to see it: The nyala’s main stronghold is the eastern coastal belt of South Africa. It is the most conspicuous antelope in the likes of Hluhluwe-iMfolozi, Phinda and uMkhuze, and present in smaller numbers in Eswatini and the Greater Kruger. Small numbers also occur in parts of eastern Zimbabwe and southern Malawi.

The world’s second-largest antelope, the bongo is a beautiful forest-dweller whose deep chestnut coat is marked with bold vertical white stripes. Two distinct subspecies are recognized: one ranges widely across the lowland rainforests of west and central Africa while the other is confined to a few montane forests in East Africa. Known as the mountain bongo, this latter subspecies was probably never all that common, and the IUCN Antelope Specialist Group now lists it as Critically Endangered, with fewer than 200 individuals thought to survive as a result of hunting and habitat loss.

Where to see it: The mountain bongo is now effectively endemic to central Kenya, Its main stronghold is Aberdare National Park but the odds of encountering one here are slim indeed. You can visit a bongo herd being reared for eventual release into the wild at Fairmount Mount Kenya Safari Club’s animal orphanage.

The last large antelope species to elude western scientists, the mountain nyala is an Ethiopian endemic first documented in 1908 and described two years later. In the flesh, it bears less resemblance to the nyala than it does to the greater kudu, but recent DNA analysis indicates that its closest relatives are bushbuck, sitatunga and bongo. The male ranks among the most handsome of African antelope, with long twisted spiral horns and a brown-grey coat marked with indistinct spots and stripes. The population of this Endangered antelope has slumped from 7,000+ in the 1960s to fewer than 2,000 today.