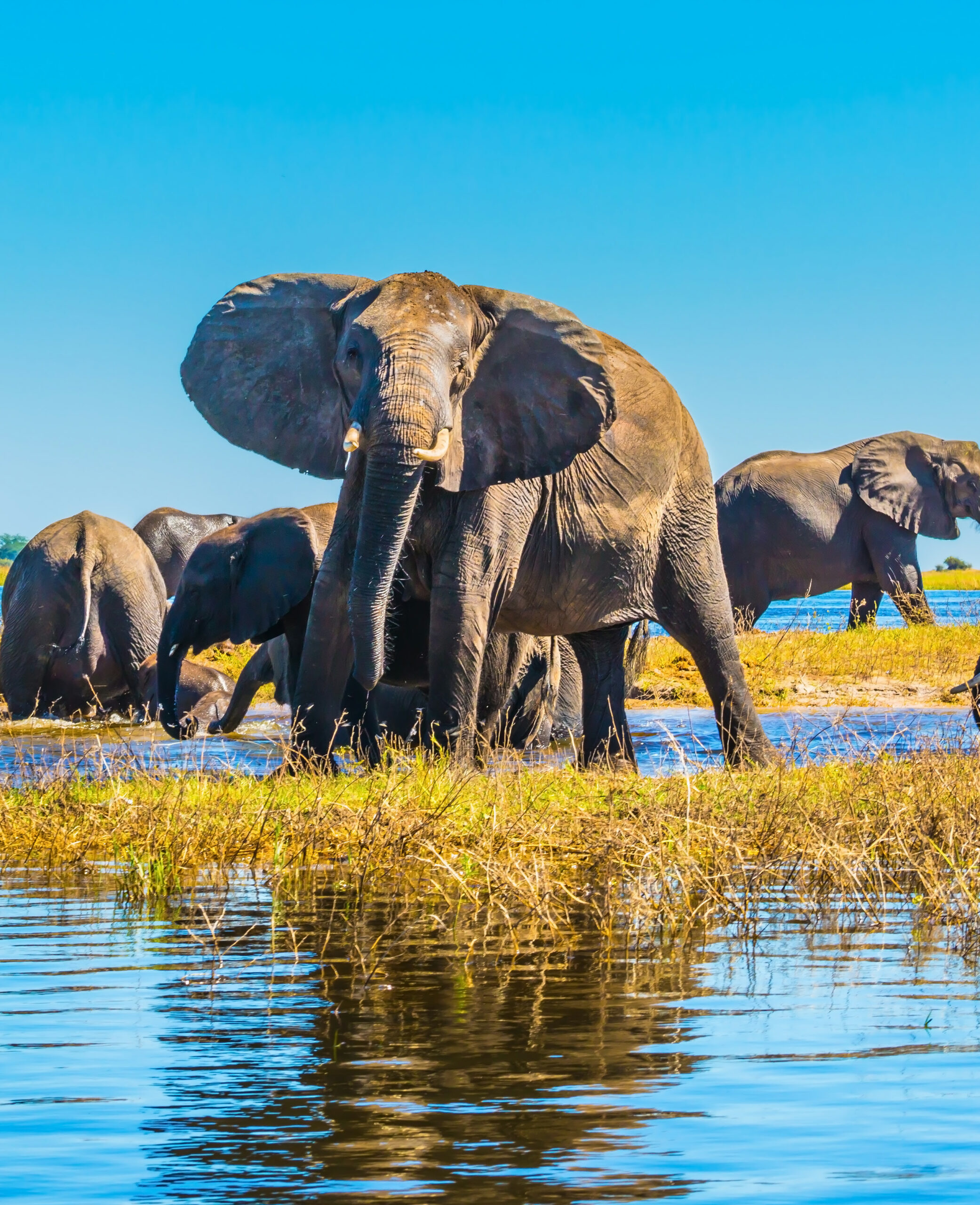 Home  /  News   /  The Best Places To See Elephants In Africa

The Best Places To See Elephants In Africa

Elephants are among the most engaging and behaviorally fascinating of African animals. Intelligent, playful, and highly sociable, the world’s largest terrestrial creature lives in closely-knit matriarchal herds led by the oldest female, while adult bulls roam around singly or in loose bachelor herds. Elephants possess several unique appendages, most conspicuously a trunk that assists them in foraging from high branches, shaking fruit from trees, and sucking up water, as well as a pair of tasks whose multiple uses include digging for water and salt. You can expect to see elephants well in most major African reserves, from Kruger and Okavango to Ruaha and Tsavo, but the following five safari destinations stand out as offering something special when it comes to elephant viewing.

Amboseli is my favorite place to watch elephants. In large part, this is thanks to the Amboseli Elephant Research Project (AERP), which has gathered data on 1,500-plus individuals in the greater Amboseli ecosystem since 1975, and now stands as the largest and longest-serving study of its type in Africa. The ongoing presence of the AERP helped spare Amboseli from the intensive ivory poaching that prevailed elsewhere in East Africa in the 1980s. As a result, the park remains home to a number of seriously impressive tuskers, while its matriarchal herds are incredibly relaxed around vehicles, allowing visitors to observe interaction and behavior at close quarters.

The elephants of Amboseli stand out for two other reasons. The first is that several of its herds are unusually aquatic, often spending much of the day foraging in the lushly vegetated swamps that are dotted around the park. The second is that Amboseli lies at the northern base of Kilimanjaro, and the sight of an elephant herd marching across the plains below the snow-capped peak of Africa’s tallest mountain is both breathtaking and iconically photogenic.

Top Tip: If you’re hoping to capture elephants and Kilimanjaro in the same photographic frame, be aware that the mountain is often shrouded during the day, only to emerge from the clouds at dawn or dusk, so time your game drives accordingly.

Ngorongoro doesn’t compare to certain other Tanzanian safari destinations – for instance, Tarangire, Ruaha, and Nyerere (formerly Selous) – when it comes to elephant densities. Indeed, the crater’s relatively confined nature means that no matriarchal herds are resident, and the total elephant population at any given time is unlikely to comprise more than 100 individuals. Where Ngorongoro stands out, however, assuming you place quality before quantity, is that as something of a retirement home for aging bulls, it harbors some hulking great tuskers of a stature now seldom seen elsewhere in East Africa.

Top Tip: The best place to look for elephants on the floor of Ngorongoro is Lerai Forest, a gorgeous stand of yellow-barked fever trees that creates some wonderful photographic opportunities, with the verdant crater wall as a backdrop.

If any single park in Africa qualifies as elephant central, it is surely Chobe, which might support a concentration of 100,000 individuals – by some estimates, 40% of the continental total – between May and September. At any time of year, herds of 100 elephants are likely to be seen from a Chobe River boat safari, siphoning drinking water with their trunks, splashing it down their backs, and playing in the shallows. Elsewhere in this vast park, Savuti is the only place in Africa where certain lion prides specialize in taking down elephants.

Top Tip: Although Chobe lies in Botswana, it is only 50 miles west of Victoria Falls, on the border of Zambia and Zimbabwe. The park is thus easily visited on an organized day safari from either side of the falls, though a one- to three-night stay in one of Chobe’s riverside lodges will be more rewarding.

Most of Zambia and Zimbabwe’s national parks harbor an impressive density of elephants. But the standout for me in terms of elephant viewing is the stretch of the Zambezi flanked by Lower Zambezi and Mana Pools National Parks. It isn’t that the number of elephants here is particularly outstanding so much the fact that motorboat and canoe safaris along the Zambezi offer the opportunity to gain a hippo’s-eye perspective of these massive creatures as they saunter along the river bank or wade out to the islands. The elephants here are also famous for their unusual habit of standing on their hind legs and stretching their trunks high into the canopy to feed on leaves that would normally be the preserve of giraffes.

Top Tip: Although most lodges in Lower Zambezi and Mana Pools offer short motorboat and canoe excursions, the most adventurous and arguably the best way to explore the river is a multi-day canoe trip staying at different camps every night.

When it comes to close-up encounters with super-relaxed elephants, I think of Addo as South Africa’s closest answer to Amboseli. It hasn’t always been this way, mind you. For many years after Addo was gazetted in 1931, its elephants – the last eleven survivors of a prolific population that once thrived in the dense thicket typical of the Eastern Cape – remained notoriously elusive and aggressive towards human intruders, so much so that the national park forbade private game drives until as recently as 1980.

Today, by contrast, Addo is home to some of the most Zen elephants you’ll find anywhere in Africa, and the dense population – its gene pool broadened by the introduction of several bulls from Kruger – means it isn’t uncommon to see 100-plus individuals in the course of one day. All the Big Five also occur naturally or have been reintroduced to Addo, and on our most recent visit in 2019, we had excellent sightings of lion, buffalo, and black rhino.

Top Tip: A great destination for self-drive safaris, Addo lies in a malaria-free region that tags neatly on to a road trip from Cape Town via the Garden Route to nearby Port Elizabeth, a large city serviced by one of South Africa’s busiest domestic airports.