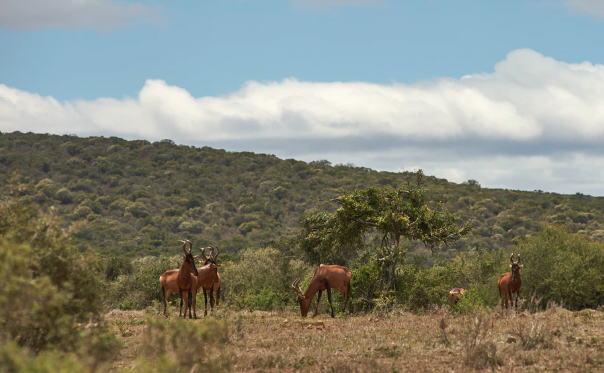 Most people who embark on an Africa safari dream of being rewarded with good sightings of all the Big Five. This iconic quintet dates back to a time when African safaris focused on shooting with a rifle rather than a camera, so it lumps together the five animals considered most dangerous by hunters: lion, leopard, elephant, buffalo and black rhino. These days, most people would consider white rhino to be an honorary member of the Big Five, and many safarigoers will be more excited to see a giraffe or cheetah than a buffalo. Nevertheless, the concept of the Big Five remains central to the safari industry.

So it is rather surprising that there are very few parks and reserves where the entire quintet is likely to be seen. True, there’s no shortage of destinations where you can be reasonably certain of spotting lion, elephant and buffalo, but rhinos have been hunted to extinction in many reserves, while leopards tend to be very secretive except where they’re habituated to vehicles. Here we highlight a select few safari destinations where the big five are all present and reasonably conspicuous.

In numerical terms, Kruger ranks as Africa’s most important Big Five destination. Indeed, it is the last place to host viable breeding populations of them all: at least 45,000 buffalo and 20,000 elephant, some 2,000 lion and 1,000 leopard, and the world’s largest populations of both white and black rhino. The dense bush typical of Kruger means you need more time and effort to see wildlife than you would in the likes of the Serengeti and Masai Mara, but self-drive the park over a week or so, and you’d be unlucky not to see all the Big Five. You could consider capping your Kruger safari with a couple of nights at a neighboring private reserve to be all but certain.

Kenya’s premier safari destination, the Masai Mara, a northern extension of Tanzania’s Serengeti, is best known for the migrant wildebeest herds that arrive there over July to September. But it is also a top notch Big Five destination. As might be expected of the setting for the TV documentary Big Cat Diaries, it’s particularly strong when it comes to lion, leopard and cheetah, while buffalo and elephant are also common. Some luck is required to see black rhino, which are now very scarce. To boost your chances, stop over en route at Lake Nakuru National Park, where you’re almost certain to see white rhino on the lake floodplain, and might also encounter black rhino in denser bush.

Zambia is a great all-round safari destination, particularly if you’re keen on canoe and walking excursions. National parks such South Luangwa and Lower Zambezi offer some of the best leopard viewing in Africa, and are also very good when it comes to lion, elephant and buffalo. However, the only place in Zambia where you can see all the Big Five, including a reintroduced population of black rhino, is North Luangwa, where the focus is mainly on guided walking safaris.

Africa’s most reliable Big Five destination is the cluster of private reserves that share unfenced borders with Kruger. Known collectively as Greater Kruger, this area offers superlative leopard and lion viewing. Over the course of a standard three-day visit you can also be reasonably sure of the rest of the Big Five, and might well see cheetah and African wild dog. My favorite reserve here is MalaMala, which combines peerless leopard viewing with very low tourist densities. The smaller reserves that comprise Sabi Sand also offer exceptional wildlife viewing.

A popular safari add-on to Victoria Falls, Zimbabwe’s largest national park is renowned for its prolific population of elephants. All the big five are present, and it is particularly good for big cat viewing, but commercial poaching has rendered the indigenous black rhino population close to invisible. One way around this is to tag on a visit to nearby Matobo National Park, which supports healthy numbers of introduced white rhino.

Kenya’s second-largest protected area comprises more than 20 contiguous private reserves and tribal conservancies roamed by substantial populations of elephant, buffalo, lion, leopard and black and white rhino. Here, exclusive private reserves such as Ol Pejeta and Lewa offer excellent Big Five viewing as well as the opportunity to see the endangered African wild dog and the localized reticulated giraffe and Grevy’s zebra. Because they are on private land, many Laikipia camps and lodges offer activities such as guided walks, horseback excursions or night drives.

Uganda wouldn’t top the list of safari destinations suited to those whose only goal is seeing the Big Five. But it’s not a bad choice either, particularly if you’re also keen on tracking gorillas and chimpanzees. Uganda’s biodiverse western safari circuit is good for lion, elephant and buffalo, and I’ve seen leopards in both Queen Elizabeth and Murchison Falls National Parks. Factor in the opportunity to track introduced white rhinos at Ziwa and look for shoebills in the swamps, as well as the diverse forest fauna and checklist of 1000-plus bird species, and there’s truly no other country in Africa that offers a comparably diverse safari experience in such a compact area.

The world-famous Serengeti is home to all the Big Five and seldom disappoints when it comes to lion, leopard, elephant and buffalo. Like the neighboring Maasai Mara, it’s also a great place to see cheetah. Unfortunately, the few surviving black rhinos are confined to one guarded area, which can only be visited with a special permit. However, almost all Serengeti safaris include a stop en route at Ngorongoro Crater, which also hosts all the Big Five, and is one of the most reliable places anywhere for black rhino.

It’s a bit of a cheat, this. Namibia’s premier safari destination isn’t actually home to all the Big Five. But since the only missing member is buffalo, which is easily seen elsewhere, many visitors – repeat safarigoers in particular – would consider that to be an inconsequential flaw. Of the rest of the Big Five, you stand a good chance of seeing lion, black rhino, elephant and to a lesser extent leopard. Etosha is unusually well suited to self-drivers.

It may come as a surprise to learn that the only country in Africa where you can track mountain gorillas and chimpanzees, then go on a safari to look for all the original Big Five (i.e. black as opposed to white rhino) is Rwanda. The safari element of this package is provided by scenic Akagera National Park, where established populations of elephant, buffalo and leopard can be seen alongside recently reintroduced lion, black rhino and white rhino. The public sector of Akagera is a more hit-and-miss than the likes of Kruger or Serengeti when it comes to seeing all the Big Five, but based on our most recent visit, you stand an excellent chance of scoring a full house if you stay in Wilderness Safaris’ private Magashi concession.