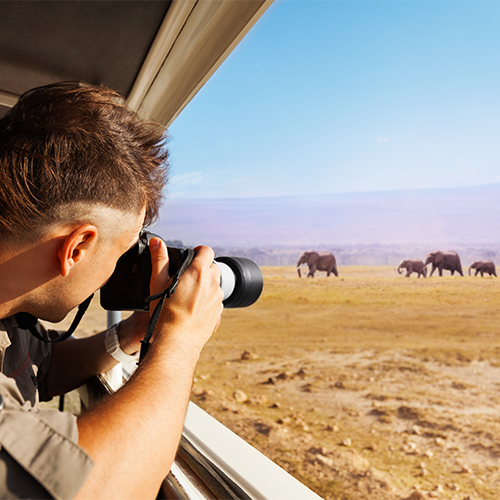 Photographic Tips For Your African Safari

One of the most enjoyable aspects of an African safari is the opportunity to get within close photographic range of lions, elephants, giraffes and other such iconic creatures. Indeed, there are many popular safari destinations where these animals are so relaxed that you don’t need to do much more than point your smartphone in the right direction to accumulate a few passable pictures. All the same, with a little extra thought and effort, there’s a great deal you can do to elevate your wildlife photography to a higher standard. Here are a few tips to get you started:

In addition to a high quality digital SLR body, you’ll want a range of lenses. On safari, your go-to lens is likely to be a 70-300mm or similar telephoto zoom (possibly boosted by a 1.4x or 2x converter, though these tend to result in greater quality loss than post-safari cropping). A wide-angle zoom is also recommended, ideally on a second body, so you don’t need to keep changing lenses in dusty conditions.

At the risk of stating the obvious, there’s little point in spending a fortune on camera gear unless you familiarize yourself with how it works: read the manual carefully, then get in a little pre-safari practice by photographing your pets or local wildlife.

Get out early, stay out late

Generally speaking the best time to photograph wildlife is in the early morning (from just before sunrise until an hour or so after it) and late afternoon (the last hour before sunset).

The main reason for this is that the light is much softer and more photogenic when the sun is low in the sky, making for richer, more saturated colors, and providing better opportunities to use back lighting and side lighting for effect. A secondary reason is that this is when lions, leopards and other predators tend to be most active.

Note, however, that the middle of the day is often good for portraiture in overcast weather, and it is also when you’re most likely to see wildlife congregate at drinking sources.

For wildlife photography, you generally want to shoot at fast shutter speeds in order to freeze the subject. If your subject is very static, you might get away with a shutter speed of 100 (which, incidentally, means 1/100th of a second).

You’ll need to go faster for moving subjects, from 500 upwards if it’s walking, and 1250 or higher if it’s running or flying.

If the light is too low to do this at your normal ISO setting, then set the ISO at a higher number, which will allow for a higher shutter speed.

You might be surprised at how many frames you shoot off on safari, and also at how little time you get to edit and delete rejects. For this reason, it’s worth carrying several spare cards, or better still a laptop onto which you can download your photos every couple of days. If you’re serious about photography, take a backup drive for security.

Lining up correctly is integral to getting the best wildlife photographs. Some driver/guides have a great feel for this, others may need gentle guidance.

In the vast majority of situations, the first rule of thumb is to ensure that you shoot with the sun behind you (the exception being when you deliberately choose to play with side or back light).

It’s also worth trying to line up so that your subject is angled slightly or fully towards the camera, unobstructed by grass or other vegetation, and not in full or partial shadow.

If your subject is on the move, aim to position the car so that the animal walks towards the camera, ideally in such a way that you can take advantage of any clearings in its anticipated trajectory.

Avoid shooting down or up

In most situations, the strongest wildlife portraits are taken at eye level or slightly below. In an open-topped vehicle, you’ll generally get a better picture shooting from the window than from the roof, especially if the subject is close to the car. It’s also worth looking for slopes that allow you to place the car slightly lower than the subject, so you can shoot it face on from the window or roof.

At the other extreme, when you’re photographing birds and other animals in a tree, you’re unlikely to get great results shooting from underneath them. Where possible, you’re better off standing further back and aiming for a flatter angle.

All of this, incidentally, is quite easy to work on at home by photographing people or animals at different angles and looking at the results.

It is easy to become obsessed with getting as close as you can to an animal to take a full-frame portrait. But some of the most powerful wildlife pictures are those that show the animal in its natural environment. Keep an eye open for opportunities to capture, for instance, a giraffe or elephant walking below a dramatic sky, a cheetah or baboon surveying its surrounds from a termite hill or dead tree, or a herd of antelope or buffalo marching towards a river to drink.

An important feature of almost any successful wildlife portrait is that the subject’s eyes stand out. This is most easily achieved with animals whose eyes naturally contrast against the surrounding skin, fur or feathers. With other animals, you often need to wait until the eyes catch a glint of sunlight in order that they spark into life.

Among the most difficult subjects for portraiture are animals with dark eyes set below deep brows, a category that includes many primates, including chimpanzees and gorillas. You’ll often have the best success with these animals if you photograph them in low, even light, or wait until their head and eyes glance slightly upwards to catch the ambient light.

Although the high ISOs attainable on many modern cameras make them relatively forgiving of camera shake, it’s still best to photograph from a stable base. From a car, this means resting your camera on the roof or window frame, ideally nestled into a large snug beanbag, with the engine switched off to avoid vibration. Other options include a monopod or tripod, but in our experience these are relatively clumsy and tend to slow you down.

A common – and understandable – reaction to seeing your first wild lion or elephant is a loud shriek of excitement. Fortunately, in many national parks, these popular animals are so habituated that they’re unlikely to pay much attention to anything that happens inside a car. But if you’re lucky enough to get within photographic range of more skittish creatures – nocturnal carnivores, small antelope, birds, and so on – try to stay as quiet as possible, since they’re likely to take fright at even the slightest unexpected noise or movement.