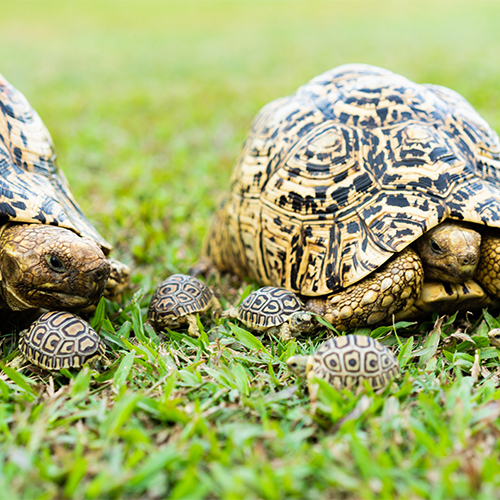 Everybody knows about the Big Five, that elite group of African heavyweights which tops most safari wish lists: buffalo, elephant, leopard, lion and rhinoceros. Far fewer visitors to Africa are aware of the Little Five, a quintet of fascinating but more obscure namesakes whose existence emphasizes that there’s far more to be seen on safari than the obvious big game. Gimmicky as the concept of the Little Five might be, you’d do well to see all of these creatures on any African safari, and looking for them is a great way to attune yourself to the rich variety of so-called ‘small stuff’ that inhabits the African savannas.

The most conspicuous and easily seen of the Little Five, buffalo-weavers are noisy starling-sized birds that nest colonially in large acacia and other trees. The first part of these name alludes to their habit of following herds of buffalo and other large ungulates to prey on disturbed insects, while the second refers to the elaborate but rather scruffy multi-chambered nests they weave from grass and sticks.

Buffalo-weavers are unique to tropical Africa, where three species are recognized. Most widespread is the red-billed buffalo-weaver, which might be seen in almost any major safari destination, from South Africa’s Kruger National Park north to the Ethiopian Rift Valley The male of this species is almost all black, the female scaled brown, and both have a striking orange-red bill. Remarkably, the male is one of the very few birds – and so far as I’m aware the only passerine – to possess a pseudo-penis. It is also unusual among birds in that mating can take up to 20 minutes.

In northeast Kenya, look out for the similar-looking white-billed buffalo-weaver, a Sahelian species with a conspicuous white bill. Far more striking than either of these, the white-headed buffalo-weaver, which ranges from northern Tanzania to southern Ethiopia, is a white and black bird whose bold red rump is particularly conspicuous in flight.

Endemic to Africa, elephant shrews – also known as sengis – are small insectivorous mammals whose closest living relatives include aardvarks, golden moles and the tenrecs of Madagascar. They move like miniature kangaroos, and can be surprisingly fast, scurrying at around 15 miles/hour as they search for edible insects, absurdly elongated noses sniffing the ground like twitchy elephant trunks.

Around 20 elephant shrew species are recognized, and collectively they occur throughout most parts of sub-Saharan Africa. Sightings are unusual due to their secretive nature and largely nocturnal habitats, but you might occasionally encounter one on a night drive almost anywhere in the region. More reliably, the eastern rock elephant shrew is frequently seen in daylight at Rhodes’s Grave, which stands on a massive granite outcrop called Malindidzimu in Zimbabwe’s Matobo National Park.

Worth a special mention, the giant elephant shrews of the genus Rhynchocyon are forest-dwellers notable for their colourfully patterned coats and relatively diurnal habits. There are five species, all confined to small areas of lowland forest in coastal East Africa or the Congo basin, where they might be glimpsed along footpaths at a few specific sites, notably Tanzania’s Udzungwa Mountains National Park and Kenya’s jungle-bound Gedi Ruins.

Africa’s most common, widespread and habitat tolerant chelonid, the leopard tortoise is named for its attractive gold-and-black spotted (or, more accurately, blotched) shell, which tends to become quite faded in older individuals. Most common in dry savanna and absent from forest interiors, the leopard tortoise might be encountered in almost any safari destination in eastern and southern Africa.

This is one of the world’s five largest tortoises, with some individuals weighing in at 100-150lb, though 40-50lb is more typical in most of its range. Based on our observations, the subspecies found in the far south of South Africa and in Somalia and eastern Ethiopia are considerably bulkier than their counterparts elsewhere. And if you do encounter a real heavyweight, some respect is due – it’s probably somewhere between 60 and 100 years old!

Should you ever visit Addo Elephant National Park, Domkrag Dam (an excellent spot to stop and look for thirsty wildlife) is named after a long deceased 130lb leopard tortoise that had a habit of crawling under cars and immobilizing them (‘domkrag’ means ‘carjack’ in Afrikaans). Domkrag’s hefty carapace is now on display at the interpretive center in Addo’s main rest camp.

A type of insect larva placed in the family Myrmeleontidae, ant lions are tiny predators named for their leonine ferocity and diet of ants and other small arthropods. The best known African antlion species are those that capture their prey in small funnel-like pit traps, which they dig into sandy or loose soil with their abdomen. They then bury themselves at the pit base, pincer-like jaws projecting upward and wide open, ready to devour any insect that slips down the sandy sides.

Despite their ferocity, ant lions would be inconspicuous were not for their trap pits, which are easy enough to spot, especially in suitably sandy habitats. If you’re with an experienced guide, they should be able to remove the ant lion for you to inspect, then put it back in it’s lair without harming it, but we don’t recommend that you try this yourself.

One reason for the ant lion’s voracious appetitive is that it’s feeding for a long and hungry future. Like the caterpillar of a butterfly or moth, the larva eventually builds a cocoon and retreats into it, emerging a few weeks later as a dragonfly-like adult that might live for a month but in many cases cannot eat.

Formidably armored members of the scarab family, rhinoceros beetles are in some respects the most impressive of the Little Five, and certainly the ones that bear the strongest resemblance to their Big Five namesake. They are named for their single frontal horns, which bear a strong resemblance to those of a rhinoceros, but with a tip that extends significantly above the forehead. Several species are recognized, most but not all being metallic black in color, and some attain a length of 6 inches.

Rhinoceros beetles rank among the world’s most proportionately strong animals, hence the alternative names Atlas or Hercules beetles. Despite this, they are strictly vegetarian, and harmless to humans – the horn for which they’re named is used in combat between rival males, for protection against predators, and for digging and lifting.

Various species of rhinoceros beetle are common in most African safari destinations, though as litter feeders, they tend to be associated with woodland and forest habitats. Most species are predominantly nocturnal, but they’re often attracted to lodges and camps, flying drone-like towards a light source, then landing clumsily, often on their backs, with legs flailing upwards. There’s no reason not to pick up a stranded rhinoceros beetle; put it back on the ground, gently and feet first, and you’ll actually be doing it a favor.