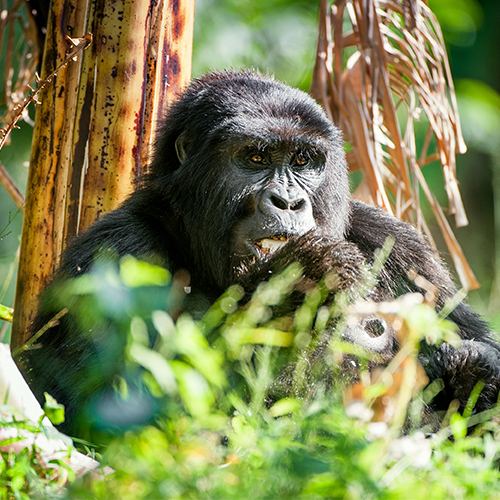 Among the most charismatic of wild animals, gorillas are hirsute heavyweights that live in the lowland and montane rainforests of equatorial Africa. Often portrayed as dangerously ferocious creatures, these giant apes are in fact the archetypal gentle giants, content to spend their days chilling on the forest floor chomping on bamboo and other vegetarian fares. Here we introduce you to the world of gorillas, which can be tracked on foot in several countries, most notably Rwanda and Uganda.

A male gorilla typically stands up to 1.8m (5ft 11in) tall and weighs around 170kg (365lb). This makes it far heavier than an average human of comparable height, thanks mainly to those muscular arms and legs, a well-developed pot belly, and a truly massive square head. The tallest wild gorilla on record stood at 1.95 m (6 ft 5 in) while the heaviest weighed 267 kg (590lb). Females are significantly shorter and less bulky.

Despite their imposing bulk, gorillas are peaceable creatures whose diet is almost entirely vegetarian. They are versatile foragers, and different populations have quite different eating habits, influenced largely by availability. Mountain gorillas are very partial to fresh bamboo shoots but have been recorded eating leaves and stems of 140-plus plant species, whereas lowland populations incorporate more fruit into their diet. Around 2% of a gorilla’s diet is made up of insects and other invertebrates, with ants being a favored protein supplement. Unlike humans and chimpanzees, gorillas are not known to hunt larger prey.

Like most other primates, gorillas are highly sociable. They live in well-defined groups that usually contain 10-15 individuals but might number anything up to 50. A typical group will comprise a dominant male, possibly one or more subordinate males, a harem of three or four mature females, and several youngsters.

Unusually for mammals, the male is the focal point of a gorilla group. Sexually mature males are known as silverbacks, on account of the prominent grey saddle that appears on their back in their early teens. Once a male gorilla becomes a silverback, he will usually start to acquire a harem, though some individual males are content to be the subservient partner in a sibling coalition. Dominant silverbacks are fiercely protective and will fight challengers vigorously, sometimes even to the death. If an established patriarch loses such a fight, the usurper will generally kill any nursing infants in the group to bring the mother back into estrus.

Female gorillas reach sexual maturity at around eight years, after which they usually leave their maternal group. A young female might move between different groups until she gives birth, but will normally stay loyal to the father of her first offspring. The gestation period of gorillas is similar to that of humans so a female who reaches old age will typically have raised five or six infants to sexual maturity. Seniority among females is determined not by strength or fighting, but simply as a function of who has been part of the group the longest.

Gorillas are sedentary and peaceable creatures. They typically spend daylight hours foraging on the ground but move into the trees at night, when each individual builds a temporary nest. A group will usually move no more than a mile on any given day but may travel further after a stressful incident, such as an encounter with poachers or confrontation with another gorilla group. Gorillas have few natural enemies other than humans, though they might occasionally be hunted by leopards. Wild gorillas typically have a lifespan of up to 45 years, whereas captive individuals might survive into their 60s.

Gorillas are among our closet genetic relatives

Gorillas are classified as great apes and placed in the family Hominidae, along with orang outings, chimpanzees, bonobos, and humans. They share more than 95% of their DNA with us and are more closely related to humans, chimpanzees, and bonobos than to any other living creature. Like other hominids, gorillas are highly intelligent. In the wild, they have been known to use tools (for instance, cracking open palm nuts with a rock, or using a stick to gauge the depth of a swamp before crossing it) while captive individuals have been taught to communicate with a form of sign language.

The name gorilla dates back 2,500 years

Gorillas were first described scientifically in 1847 based on a specimen obtained in Liberia by the American missionary Thomas Savage. The name gorilla is much older, however, deriving as it does from the ancient Greek gorilla, a tribe of hairy women legendarily encountered off the coast of what is now Sierra Leone by Hanno the Navigator in the 5th Century BC.

There are several types of gorilla

Prior to 2001, all gorillas were classified as a single species. Today, taxonomists recognize two discrete species, the western gorilla (Gorilla gorilla) and eastern gorilla (G. beringei), based on DNA tests that indicate these two populations diverged around two million years ago. Each species is further subdivided into two subspecies. The rarest of these is the Critically endangered Cross River Gorilla, with a total population of fewer than 300 residents in the forested hills of the Nigeria-Cameroon border region.

Mountain gorillas can be tracked in Uganda and Rwanda

Tracking gorillas is a true bucket list experience. If you do it in Rwanda or Uganda, as most people do, the subspecies you’ll visit is the mountain gorilla (G. b. beringei;  in reference to  Captain von Beringe, the German officer who shot the first two documented specimens in 1903). Mountain gorillas are distinguished by several adaptations to their high-altitude home, most visibly a longer and more luxuriant coat than other subspecies. Their distribution is confined to two mountain ranges: the volcanic Virunga in the border region of Rwanda, Uganda, and DR Congo and the rolling hills of Uganda’s Bwindi Impenetrable National Park. Several groups of mountain gorillas have been habituated for tourist visits in all three countries where they occur.

Between 1960 and the early 1970s, a combination of habitat loss, civil war, and a grisly souvenir trade in gorilla heads and hands caused the Virunga mountain gorilla population to plummet from around 450 individuals to an estimated 250. Fortunately, thanks in large part to revenue and awareness raised by gorilla tourism, which was first initiated in Rwanda’s Volcanoes National Park in 1979, numbers have increased steadily since those dark days. The latest Virunga-wide gorilla census, undertaken in 2018, counted 604 individuals – a 25% increase since 2010–11. The separate Bwindi population has increased from around 320 individuals when gorilla tourism started there in the 1990s to around 460 in 2018. These encouraging figures prompted the IUCN to upgrade the status of the mountain gorilla from Critically Endangered to Endangered in November 2018.