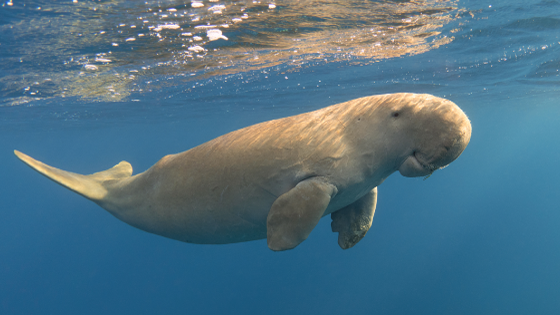 Eastern and Southern Africa are renowned for their rich terrestrial fauna, but the region’s beaches and offshore waters also support a diverse cast of marine giants. Here we introduce you to some of these fascinating creatures and tell you where best to look for them.

As the largest living creatures on the planet, whales need little introduction. Several species live off the coast of Africa, most notably the southern right whales that gather in sheltered bays along the Western Cape coast, and the humpback whales that migrate seasonally along the Indian Ocean coast.

Where to See Whales The South African town of Hermanus is the world’s best site for land-based whale-viewing, offering stunning clifftop views over the southern right whales that calve in Walker Bay over June to November. Elsewhere, you might see whales almost anywhere along the east coast of Africa, but that’s a matter of luck more than judgment.

These charismatic bipedal birds cannot fly and look comically clumsy on land, but they transform into magnificent torpedo-like swimmers in their marine hunting grounds. The African penguin is the only one of the world’s 20-odd species resident on the continent, where its range is more or less confined to the Atlantic Coast of South Africa. A colonial breeder, it can be surprisingly noisy, especially when it unleashes the harsh donkey-like bray alluded to its alternative name jackass penguin.

Where to See African Penguins The largest mainland colony can be found near Cape Town at Boulders Beach and will be familiar to viewers of the 2021 documentary Penguin Town. Smaller colonies inhabit Betty’s Bay and Lambert’s Bay.

Africa’s five marine turtle species include the leatherback, which is the world’s bulkiest non-crocodilian reptile, measuring up to 10ft long and weighing up to 1,800lb. A typical turtle life cycle involves the female laying up to 300 eggs nocturnally in a hole she digs on a sandy beach, then leaving them to incubate for two months before they hatch and return to the sea. All five species are listed as Endangered or Vulnerable, due to a combination of hunting, accidental trapping, and pollution.

Where to See Marine Turtles Divers and snorkelers might get lucky on almost any outing. A more certain option is to join an organized nocturnal nesting expedition in South Africa’s iSimangaliso Wetland Park between November and March.

Southern Africa’s most common marine mammal, the Cape fur seal is a hefty piscivore that hunts in the cool waters off the Atlantic coastline. It lives in breeding colonies, often comprising several thousand individuals, and while it tends to look rather clumsy on land, it is an immensely graceful swimmer, and often very playful.

Where to See Cape Fur Seals: The world’s largest colony, comprising 200,000 individuals, is at Namibia’s Cape Cross, where the action is easily observed from a viewing platform. In South Africa, seals are often seen in Cape Town’s Victoria & Alfred Waterfront, and boat trips to island colonies run from Hout Bay, Simon’s Town, Gansbaai, and Mossel Bay.

The most feared of the marine predators often grows to be 20ft long and weighs 5,000lb. A fast swimmer, it aggressively hunts larger fish, dolphins, giant turtles, marine birds, and other prey. In South Africa, great white sharks often feed on seals and are abundant in the vicinity of island seal colonies. Despite its reputation as a man-eater, fatal attacks are relatively rare, with around 10 incidents worldwide typically recorded in any given year.

Where to See Great White Sharks: In South Africa, caged shark dives operate out of Mossel Bay and Gansbaai. Great whites can sometimes be seen hunting seals from the cliffs of Robberg Nature Reserve.

The world’s largest ray, with a wingspan of up to 20ft, the manta is a harmless filter feeder whose main diet is plankton and other tiny organisms. Boasting the largest brain of all fish, it is the only species to have passed the mirror test indicating self-awareness. A unique facet of manta behavior is the regular gathering of several individuals at cleaning stations where their gills are cleaned of parasites and dead tissue by wrasse and other reef fish.

Where to See Manta Rays: Present throughout the year, manta rays might be seen anywhere along the Indian Ocean coastline but are particularly common on ocean safaris out of Tofo (Mozambique).

Like a refugee from a science-fiction B-movie, the coconut crab is a 4ft-long lobster-lookalike whose powerful front legs terminate in a pair of deadly pincers capable of scything open a coconut shell. It hatches in the ocean, where it spends the first two months of its life before coming ashore to take its place as the world’s largest terrestrial invertebrate. It is named for its habit of climbing palm trees, clasping tight to the vertical trunk, to fetch coconuts.

Where to See Coconut Crabs Chumbe Island, a private nature reserve off Zanzibar, is far and away the best place to see coconut crabs. Community-based coconut crab tours are offered on Pemba Island’s Ngezi Peninsula.

The world’s largest living fish, the whale shark typically grows to be 30ft long, weighs around 20 tonnes, and has a life comparable to that of a human being or an elephant. Despite this, it is a passive filter feeder, and largely harmless to anything much larger than plankton. It is easily distinguished from other fish by its bulk, wide mouth, and yellow stripes and spots.

Where to See Whale Sharks: They are occasionally seen by divers at various sites along the Indian Ocean coastline, notably Sodwana Bay (South Africa), Tofo (Mozambique) and Mafia (Tanzania). If you don’t dive, join an ocean safari out of Tofo. Numbers peak during the southern summer.

As with the related whales, these highly intelligent marine mammals need little introduction. Several species are found in the region. These include the bottlenose dolphin, whose elongated upper and lower jaws create a characteristic smiling expression, and the spinner dolphin, which is named for its occasional habit of pirouetting in the surf. Dolphins often swim playfully in the wake of a motorboat, which together with their friendly persona and curiosity towards humans, makes them easy to relate to.

Where to See Dolphins Although dolphins might be seen almost anywhere along the coast of Africa, a few places stand out. These include Kizimkazi and Mnemba Atoll (the most popular Zanzibari sites for swimming with dolphins), Tofo (Mozambique) and the South African seaside villages of Lambert’s Bay and St Lucia.

Sometimes referred to as the sea cow, the dugong is a heavyweight mammal that weighs up to 900lbs, has a 70-year lifespan, and feeds almost entirely on seagrass. It is similar in appearance to the related manatee, but is confined to the Indian and Pacific Oceans. Once common in suitable habitats off the east coast of Africa, it is now very rare in this part of the world (but relatively common in Australia).

Where to See Dugongs Nowhere in Africa are dugong sightings regular or very likely; your best bet is a boat trip in the shallow bays of Mozambique’s Bazaruto archipelago.