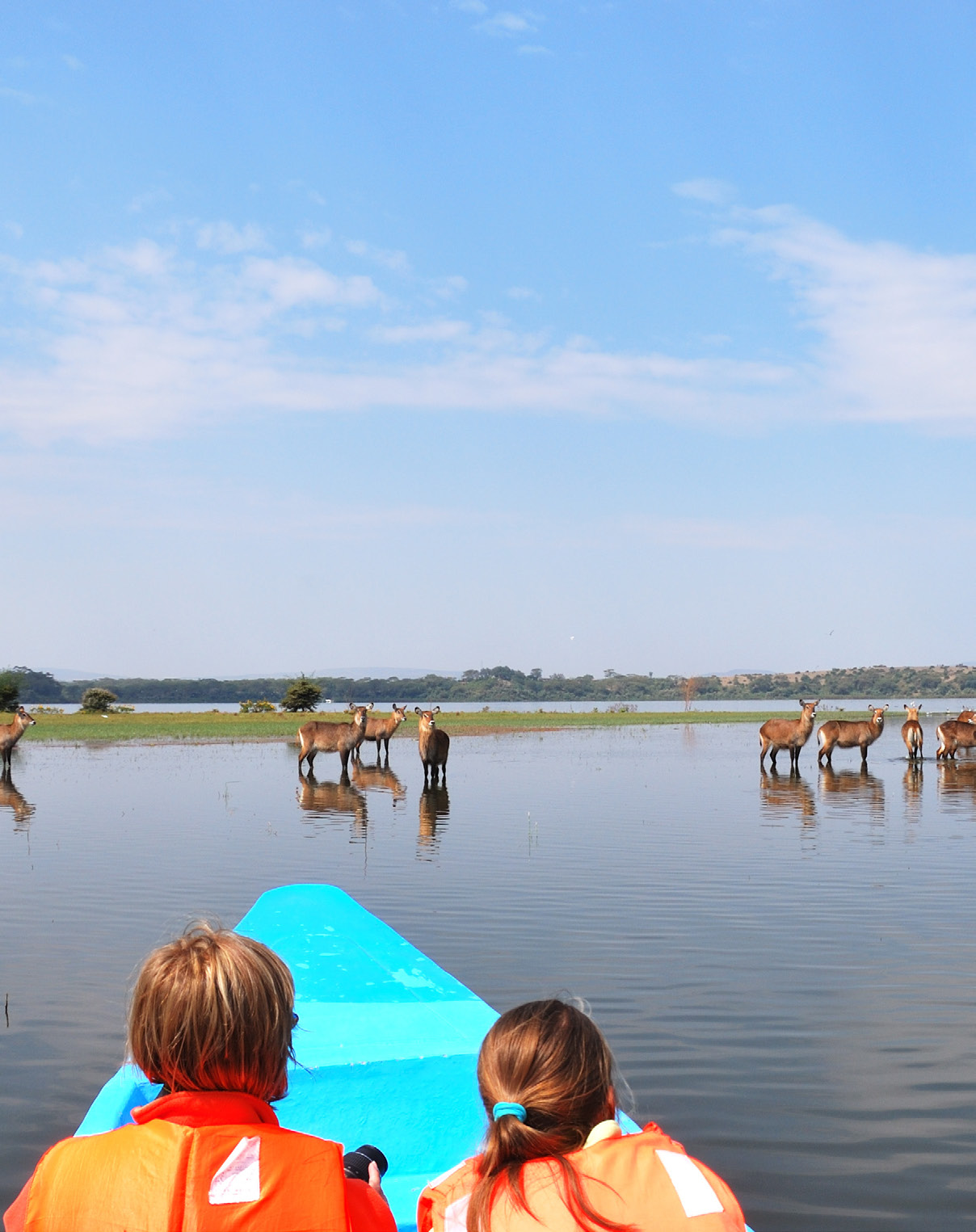 Hemmed in by tall basaltic cliffs, the dry savanna of Kenya’s volcanically-molded Rift Valley is punctuated by a string of seven gorgeous lakes, each unique in character. Where Naivasha and Baringo are welcoming freshwater bodies renowned for their bountiful aquatic biodiversity, the hypersaline waters of Nakuru and Bogoria support a monoculture of microscopic blue-green algae that feeds millions of flamingos. More extreme and remote are the salty flats of Lake Magadi, on the southern border with Tanzania, and the vast windswept expense of Turkana – the world’s largest desert lake – whose northern tip nudges into Ethiopia.

The Rift Valley lakes rank among Kenya’s most rewarding all-round travel destinations. Hiking, wildlife viewing and birdwatching opportunities abound, but the region also supports a wealth of traditional cultures, some of the world’s most important paleontological sites, and several spectacular relicts of its violent volcanic past. The significance of the lakes has been acknowledged by UNESCO, which inscribed a trio of national parks associated with Lake Turkana as a World Heritage Site in 1997, and another three lakes – Elementaita, Nakuru and Bogoria – as a separate World Heritage Site in 2011. It’s undoubtedly worth incorporating at least one of these lakes into any Kenyan safari itinerary, so here’s the lowdown on each of their main attractions.

The weirdest of Kenya’s Rift Valley lakes, Magadi (literally ‘Salt’) is a blinding sludge-bed of white soda set in the searingly hot badlands bordering Tanzania. Commercially mined for soda ash since 1911, it doesn’t receive much in the way of tourism, partly due to its end-of-the-road location 70 miles from Nairobi, but it often hosts large flocks of flamingo and other wading birds, and the otherworldly saltscape is compelling at dusk and dawn.

Although it isn’t protected in a national park, freshwater Lake Naivasha, 60 miles northwest of Nairobi, makes for a great first stopover on a road safari to the Masai Mara. Fringed by fever-tree forests and low mountains, it’s a delightfully scenic spot, and highly alluring to birdwatchers with more than 500 species present, ranging from graceful flotillas of pelicans to flocks of brightly lovebirds.

Naivasha is particularly well suited to families and to active travelers. Stroll unguided amidst giraffe and antelope on Crescent Island, take a boat out in search of hippos, or watch black-and-white colobus monkeys crash through the canopy over high tea at Elsamere, the former home of Joy Adamson (of Born Free fame).

More ambitious half-day excursions can be undertaken in a pair of national parks that practically border of the lake. These are the steep foot ascent of Mount Longonot  a spectacular dormant volcano that last erupted in the 1860s, or a cycling jaunt into Hell’s Gate, where buffalo, giraffe, zebra and various antelope populate a landscape of burnished cliffs, ancient lava plugs, sulphuric hot springs and glossy obsidian outcrops.

The smallest of Kenya’s Rift Valley lakes, Elementaita stands below a striking volcanic plug known as Elngirigata Ol Morani (a Maasai phrase meaning ‘Sleeping Warrior’) or – more frivolously – Lord Delamere’s Nose (after the British aristocrat who established an estate there in 1906). Most of the lake lies within the Delamere Estate’s 75-square-mile Soysambu Conservancy, an exclusive private retreat that hosts just two small luxury lodges and supplements game drives with horseback and camel safaris.

Passing visitors are treated to a sweeping view of Elementaita from the main road between Naivasha and Nakuru road. There’s also a fantastic viewpoint from a conspicuous hilltop cairn erected in memory of the Earl of Enniskillen in 1929.

One of Kenya’s most popular safari destinations, Lake Nakuru National Park is the ecological linchpin of a UNESCO World Heritage Site that also includes lakes Elementaita and Bogoria. The lake was once renowned for the millions of flamingos that tinged its shallows pink, but these lovely birds have been an erratic presence in recent years, mainly due to fluctuations in the water level.

Despite this, Nakuru remains a popular stopover on route to the Masai Mara, offering a good chance of spotting up to four of the Big Five. White rhino often graze conspicuously on the grassy lake floodplain, whereas black rhino tend to be more secretive and to stick to the thick scrub south of the lake. Buffalo are also common around the lake, and fortunate visitors might encounter lion or leopard. Another Nakuru specialty is the endangered Rothschild’s giraffe, and even without the flamingos, the aquatic bird life is exceptional.

Protected within a national reserve at the base of the sheer Laikipia Escarpment, Bogoria is where the million-odd flamingos once associated with Nakuru have hung out for most of the past decade. Tinged pink with cacophonous flocks of these beautiful birds, it is a truly mesmerizing sight, especially as viewed from the low cliffs to its west. A scenic highlight is the trio of primeval geysers that erupt in a searing sulphury haze to feed a network of multihued channels on the western shore.

Arguably the most conventionally beautiful of all Kenya’s Rift Valley lakes, Baringo is an unprotected freshwater body situated at the base of the same dramatic escarpment as Bogoria. Ideally suited to independent wildlife enthusiasts wanting to chill out for a few days, it supports a varied aquatic fauna, with outsized crocodiles, monitor lizards, hippos and spectacular waterbirds such as Goliath heron and African fish eagle all likely to be seen on guided boat trips arranged by a local community tourism organization.

Turkana: the lake that time forgot

Extending over 2,473 square miles and measuring 180 miles from north to south, primeval Lake Turkana is quite simply one of the most mind-blowing off-the-beaten-track destinations anywhere in Africa. Soapy to the touch, foul of taste, and home to the world’s largest crocodile population, this starkly beautiful soda lake – also known as the Jade Sea in reference to its dazzling green color – is hemmed in by an apocalyptic moonscape of dormant volcanoes, naked lava flows and viciously spiky grass swept by a relentlessly hot, fierce wind.

The three national parks associated with Turkana – South Island, Central Island and Sibiloi, the former two known for their immense bird colonies, the latter having yielded for a wealth of hominid fossils pivotal to our understanding of hominid evolution over the last four million years – have been inscribed as a UNESCO World Heritage Site. The lake hinterland is also home to some of East Africa’s most uncompromising traditional cultures, among them the nomadic Turkana herdsmen and the El Molo fisherfolk, the latter officially listed as the world’s least numerous tribe.

Accessible only on a multiday 4×4 trip passing through the parched badlands characteristic of northern Kenya, Turkana is ill-suited to those looking for a luxury safari, but for rough and ready travelers, an expedition there will be the trip of a lifetime!