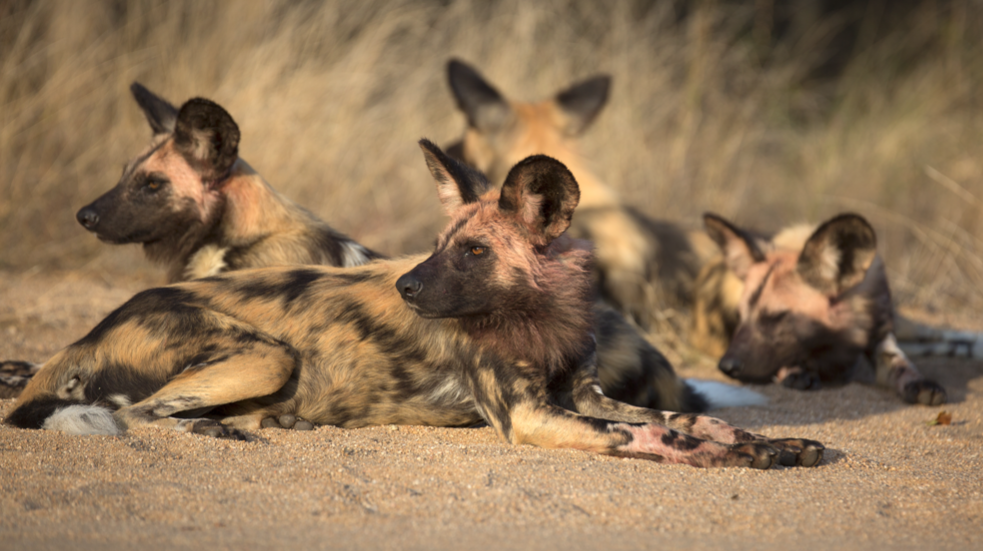 Home  /  News   /  Everything You Need to Know About African Wild Dogs, And Where to See Them

Everything You Need to Know About African Wild Dogs, And Where to See Them

Today, the African wild dog (Lycaon pictus) tops the wish list of many knowledgeable repeat safarigoers. But it hasn’t always been this way. A hundred years ago, this now-Endangered species ranked among the most common and widespread of African carnivores, with a total population of several hundred thousand ranging across 40-odd countries. Today, by contrast, only 6-7,000 individuals remain, and the wild dog has the unwanted distinction of being Africa’s second-rarest large carnivore (indeed, it is outranked in scarcity only by the Ethiopian wolf, whose natural range has always been confined to one country).

Novice safarigoers might ask: what exactly is an African wild dog? Well, actually, it’s a pretty unique creature. Placed in a separate genus to any other canid, this ultra-sociable hunter is easily distinguished by the blotched black, brown, yellow, and cream coat alluded to in its alternative name of painted dog. With a shoulder height of almost 30 inches and weight of up to 80lb (comparable to a border collie), it is also twice as bulky as any other wild canid found in Africa, though in global terms it ranks third in size after the grey wolf and red wolf.

African wild dogs have a fascinating social structure. They are cooperative breeders whose large permanent packs usually comprise up to 10 adults, often significantly more. Breeding rights are reserved for the alpha male and female, usually but not always the oldest pack members of their gender. Litters contain up to 15 pups, which are kept safe in a den for at least two months. Weaning takes place at five weeks, after which the pups are fed with meat swallowed and regurgitated by other pack members.

Hunting is a cooperative process. The entire pack will chase down its potential prey (usually a medium to small antelope), sometimes maintaining a speed of 35mph for a mile or longer, as different individuals take turns to nip, bite and tear off hunks of the poor victim’s flesh, until it collapses as a result of injury or exhaustion. It’s not a pretty thing to watch, and it is this ferocity, combined with a voracious appetite for small livestock, that led to the African wild dog being reviled as vermin during the colonial era. More recently, while habitat loss and persecution by local herders has undeniably played a role in the decline of the wild dog, a larger factor has been susceptibility to rabies and other diseases spread by domestic dogs.

The figures make for dismal reading. Of the 40-odd countries in their original range, African wild dogs are now extinct in at least 26, while fewer than 10 support viable breeding populations. What’s more, even within those select few countries, wild dogs are absent from many parks and reserves where they were once abundant. Take the Serengeti, for instance. In the 1960s, wild dogs were so common here that Jane Goodall and Hugo Von Lawick chose it as the site of the behavioral and photographic study immortalized in the book Innocent Killers. A mere 20 years later, wild dogs were all but extinct throughout the Serengeti and elsewhere in northern Tanzania. A similar thing happened in Kenya in 2017, where wild dogs numbers on the Laikipia Plateau – by far, their most important stronghold in the country – plummeted following a drought-associated outbreak of canine distemper.

Despite this, the picture isn’t entirely bleak. Greater awareness of the plight of African wild dogs, together with the concerted efforts of many conservation organizations, have allowed  numbers to stabilize or even increase in many individual reserves and national parks. And while an inclination to wander long distances has often led to the persecution of wild dogs when they stray outside of reserves, it has also allowed them to recolonize old haunts where they were formerly extinct, including parts of Northern Tanzania bordering the Serengeti-Mara Ecosystem. Another positive recent development is the reintroduction of African wild dogs to several other national parks, notably Gorongosa (Mozambique) in 2018 and Liwonde (Malawi) and Liuwa Plain (Zambia) in 2021.

All the same, while there are very few places where African wild dogs could be considered common, there are a few countries where, with a bit of luck and prior planning, you still stand a reasonable chance of seeing these engaging endangered creatures. These are our suggestions:

This southern African country is now my first recommendation to anyone who wants to see African wild dogs. The most reliable site is Lower Zambezi National Park, which is home to a few large packs, including one that numbered almost 40 individuals when we passed through in October 2021. On the same trip we encountered large wild dog packs in three other national parks: South Luangwa, North Luangwa and Kafue. Any one of these sightings would rank close to the best we’ve had anywhere in Africa.

Although wild dog sightings are very unusual in northern Tanzania, they remain regular in parts of the southern circuit. Foremost is Nyerere National Park, which forms the core of an ecosystem that hosts at least 10 percent of Africa’s free-ranging wild dogs. These days, I would definitely regard Nyerere to offer the best chance of seeing wild dogs in East Africa, particularly if you visit over the denning season of July to August. We’ve twice had good wild dog sightings in Ruaha National Park.

The greater Kruger National Park probably vies with Nyerere for the distinction of hosting the Africa’s largest breeding population of wild dogs. With luck, you stand a reasonable chance of seeing wild dogs in the national park itself, though their high mobility makes it rather hit-and-miss. More reliable prospects are MalaMala, Sabi Sands and other the private reserves bordering the national park, particularly if you aim for the early winter months of April to July, which is denning season. In our experience, the single best place to see wild dogs in South Africa is the malaria-free Madikwe Game Reserve northwest of Johannesburg.

Like its Zambian neighbor, Mana Pools National Park, on the south bank from the lower Zambezi river, is renowned one of the best places to see African wild dogs. Indeed, it was here that the relevant episode of the David Attenborough program Dynasties was filmed in 2018. Another important Zimbabwean stronghold for wild dogs is Hwange National Park, which lies in the far west of the country and is easily visited in conjunction with the world-famous Victoria Falls.

If wild dogs are a priority, northern Botswana is another good choice. A population of several hundred individuals is centered on the Okavango Delta, Moremi Game Reserve and nearby Chobe National Park. This is a vast area, however, so once again sightings are far from certain.