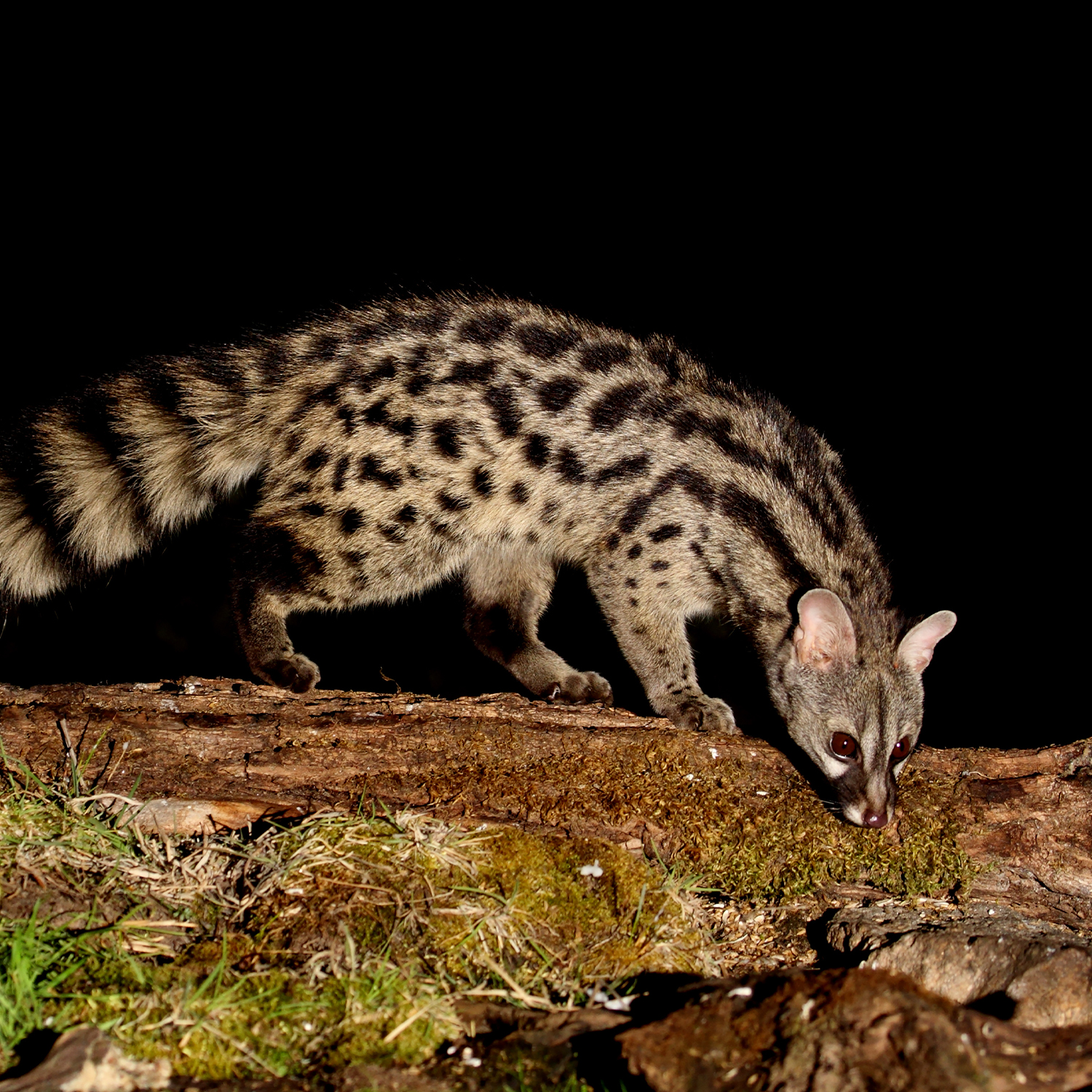 Animals To Look Out For On An African Night Safari

The African bush takes on a different feel at night. As the heat of the day dissipates, the last overhead flecks of orange and blue give way to the sort of glittering night sky one can only experience away from the city lights. The wilderness closes in, visibility drops close to zero, and a wall of white insect noise is punctuated by all manner of eerie calls: a jackal’s yelp, a hyena’s whoop, a lion’s roar, an owl’s hoot, a conference of grunting hippos. It’s slightly disconcerting, but at the same time utterly thrilling!

When it comes to wildlife, dusk signals a changeover from the relatively familiar animals of the day shift to the more secretive (and in many cases downright peculiar) cast of characters that work the safari night shift. The best way to see some of these fascinating nocturnal oddballs is to join a guided night drive, cruising slowly through the bush as an experienced tracker uses a spotlight to pick out the reflection of their eyes. Exactly which animals you might see varies from region to region, from reserve to reserve, and from one night to the next, but here are some of the most interesting nocturnal creatures to look out for on a night drive.

Often manifesting as a pair of spotlit eyes bouncing cartoonishly through the dark, the springhare is a unique nocturnal rodent associated mainly with the sandy soils into which it burrows. It stands up to 18 inches high, and can leap more than 6 foot in one bound, propelled by its powerful hind legs, making it Africa’s closest equivalent to a kangaroo.

Weighing up to 60lb, porcupines are large rodents distinguished by a coat of spiky black-and-white quills designed to deter all but the most foolhardy of predators. Essentially modified hairs, porcupine quills detach easily and are often found scattered on the ground. The animal itself, though widespread and common, is very seldom seen, and most often reveals its presence by the distinctive rattling of the quills as it walks.

Although chameleons are almost exclusively diurnal, these charismatic lizards are most readily located at night, when their scales glow spectral white in the spotlight’s glare.

Surely the oddest of all African animals, and the most eagerly sought by many repeat safarigoers, the aardvark (literally ‘earth pig’) is a hefty (up to 150lb) insectivore with tall narrow upright ears, a long snout, and powerful foreclaws designed to rip open the termitaria that house its prey. So different to any other living creature that it has been placed in its own taxonomic order Tubulidentata, this evolutionary outlier is quite common in suitable grassland and dry country habitats, but very seldom seen because it forages so late at night.

More than two dozen owl species inhabit Africa’s main safari destinations, ranging from the hulking great Verreaux’s eagle-owl to the sparrow-sized African scops owl. Many species have distinctive calls and are more often heard than seen, but the spotted eagle-owl in particular is quite often spotted on night drives, sitting motionless in a tree, or swooping silently through the air like the harbinger of death it is regarded to be in many traditional African cultures.

Also known as sengis, elephant shrews are small rodent-like insectivores distinguished by the elongated (and perpetually twitching) noses for which they are named. As with springhares, they have a rather kangaroo-like mode of locomotion.

The most secretive and nocturnal of the Big Five, leopards are quite often encountered by day in those safari destinations where they are relatively habituated. Elsewhere they’re most likely to be seen after dark, creeping furtively through the undergrowth or between trees.

Of the many nocturnal carnivores that inhabit the African bush, none is more gorgeous nor more likely to be seen on a night drive than the genet. Several species are recognized, all with a slender black-on-gold spotted torso, an exceptionally long banded tail and a cat-like demeanor. Despite this, genets are more closely related to dogs and mongooses than to cats.

Among the most distinctive of African night sounds is the plaintive ‘Good Lord, deliver us’ call of the fiery-necked nightjar, one of the most widespread of the continent’s 20-odd nightjar species. Often seen sitting on dirt roads and tracks after dark, nightjars are generally rather nondescript, a notable exception being the male pennant-winged nightjar, whose elongated second primary feathers are twice as long as its body and trail behind it spectacularly as it swoops over lakes and rivers at dusk.

More closely related to the lemurs of Madagascar than to monkeys or apes, bushbabies or galagos are small nocturnal primates named for their impossibly cute appearance and resonant baby-like cry. Absolutely tiny, with large batlike ears and wide eyes that give it a rather astonished appearance, the various species of lesser bushbaby are capable of leaping several feet between trees and are quite commonly encountered on night drives. The bulkier and less acrobatic greater bushbaby is more likely to be seen in the grounds of one of those few lodges where it has become habituated at a feeding site.

Although it is more widespread than the better-known and trimmer warthog, the bushpig is far less likely to be seen on safari due to its nocturnal habits and preference for dense vegetation. Larger and rarer still, the spectacularly hirsute giant forest hog inhabits a few scattered forested reserves in East Africa.

Common, widespread and sociable, the spotted hyena is quite often seen by day in national parks such as the Serengeti, Kruger and Amboseli. Not so the region’s other three species – the striped hyena, brown hyena and insectivorous aardwolf – all of which are strictly nocturnal and regarded as very special sightings by experienced safarigoers.

Although big cats get headline billing on most African safaris, a trio of strikingly beautiful small to medium-sized felids might be seen on night drives. These are the grey-brown caracal, which closely resembles the European lynx, the sleek large-spotted serval, which looks a bit like a scaled down cheetah, and the tabby-like African wildcat, which is regarded to be ancestral to the domestic cat.

The world’s largest mongoose species is a solitary nocturnal hunter distinguished by its conspicuous bushy white tail and habit of walking with its nose close to the ground. After genets, it is probably the most conspicuous small nocturnal carnivore in many African reserves.

Also known as the ratel, this medium-sized carnivore is best known for its symbiotic relationship with a bird called the greater honeyguide, which will guide it to a beehive, wait for it to tear it open, and feed on the scraps of honey. A pugnaciously aggressive carnivore, the honey badger has a striking black coat with a gray-white back, bear-like paws, and a deceptively beguiling puppyish face. Widespread but seldom seen, it is not strictly nocturnal, but is more likely to be encountered after dark than during daylight hours.