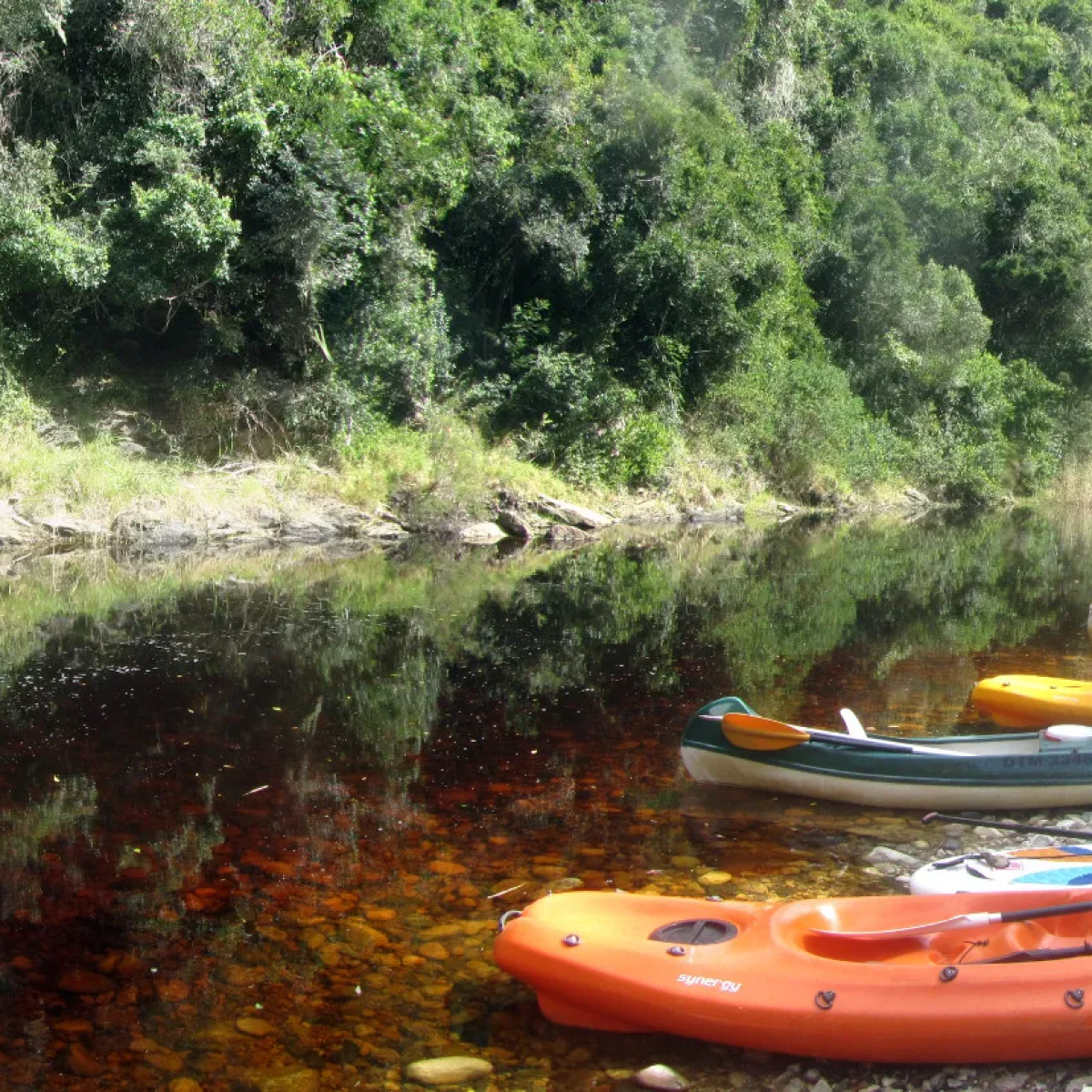 12 Cool Things to do on South Africa’s Garden Route

Few other stretches of coast offer the variety of South Africa’s Garden Route. Stretching for more than 100 miles between Mossel Bay and the Storms River Mouth, this popular holiday haven has everything from sandy beaches, tranquil lagoons, and wave-battered cliffs to evergreen forests, protea-studded fynbos, and craggy mountain peaks. Centered on the attractive small city of George, the Garden Route is also home to some of South Africa’s most likable small towns, notably Plettenberg Bay, Knysna, and Wilderness. And while large terrestrial wildlife is scarce, the region supports a rich marine life and a dazzling variety of aquatic and forest birds. Here, in no particular order, are some of our top suggestions for visitors to the Garden Route.

My favorite coastal day walk is the circular 5-mile trail around the Robberg Peninsula, whose cliffs rise 500ft above the waves. Robberg is worth visiting for the scenery alone, but it also supports a large and conspicuous seal colony, while other marine wildlife you might see from the cliffs includes great white sharks, dolphins, whales, and black oystercatchers.

Look for the Big Five in Gondwana Game Reserve

Forged from old farms between 2004 and 2008, this exclusive private reserve protects a hilly landscape of heath-like montane fynbos and regenerating agricultural land. Following an ambitious program of reintroductions, it’s the only fynbos reserve that supports all of the Big Five: lion, leopard, elephant, buffalo, and rhino. More esoterically it’s an excellent place to look for fynbos-specialized birds such as black harrier, Cape sugarbird, Cape grassbird, and orange-breasted sunbird. Amenities include a luxury bush lodge, guided game drives, and hiking and biking through an Endangered Species Area inhabited by Cape mountain zebra, bontebok, and sable antelope.

Sip on a Pinot Noir at Herold Wines

The Garden Route doesn’t match the winelands around Cape Town as a vinicultural destination. All the same, it is home to a growing number of quality estates, our favorite being Herold Wines, which was established on the misty slopes of the Outeniqua Mountains outside George in 1999. It’s one of the few estates in South Africa to specialize in pinot noir, which thrives in the Burgundy-like climatic conditions, but it also produces a selection of tasty red blends and whites. The tasting cellar has a lovely setting, and it offers light lunches and picnic baskets.

Take a Leap of Faith off Bloukrans Bridge

The 1,475ft-long, 705ft-high Bloukrans Bridge crosses the river of the same name on the provincial border between the Western and Eastern Cape. One of the most impressive arch bridges in Africa, it is also the launch point for the world’s highest commercial bungee jump – a terrifying 8-second freefall, despite its reassuring 100% safety record over 25 years of operation.

An ideal diversion for a rainy day, Oudtshoorn – the former center of a lucrative 19th-century ostrich-feather trade – is situated in the parched Little Karoo, an hour’s drive inland of George. Oudtshoorn’s feather trade collapsed many moons ago, but free-range ostriches are still farmed in the Little Karoo, mainly for their meat, which tastes like beef but is practically free of cholesterol. Several out-of-town ostrich farms offer the opportunity to hang out with these bizarre flightless birds, which stand up to 9ft tall and can run at a speed of 40 miles/hour.

One of Africa’s most compelling geological attractions, the Cango Caves comprises a 20-million-year-old, 2.5-mile-long network of passages and chambers carved into the limestone base of the scenic Swartberg (Black Mountains) north of Oudtshoorn. Standard guided tours lead through a sequence of well-lit labyrinths adorned with weird and colorful dripstone formations. Unless you are claustrophobic, unfit, or seriously overweight, I recommend joining the extended 90-minute adventure tour, which entails squeezing and clambering through narrow crevices to go deeper into the caves.

Knysna is a charming small town set on a sun-drenched lagoon hemmed in by a pair of rock faces known as the Knysna Heads. Oysters cultivated in the lagoon can be enjoyed fresh at several relaxed quayside eateries – ideally washed down with the product of South Africa’s oldest craft brewery, Mitchell’s, which was founded in Knysna in 1983.

The forests inland of Knysna were once renowned for their dense elephant population. Today, DNA tests on dung collected in the area suggest that just one lonely female survives today. Understandably, this elusive loner seldom reveals herself to human visitors, but the fact of her existence does spice up the network of walks in Diepwalle – literally ‘Deep Walls’ – Forest. Elephants aside, this ancient forest is studded with magnificent massive yellowwood trees, and it’s also home to vervet monkey, bushbuck, blue duiker, and a prolific birdlife.

Kayak the Touw River at Wilderness

The chilled village of Wilderness has an unbeatable location sandwiched between an idyllic Indian Ocean beach and a network of freshwater lakes protected in Garden Route National Park. The park and its rich birdlife can be explored on several well-marked walking trails, but to me, the one must-do here is a self-propelled kayak excursion into the forested Touw River Gorge, where you can look out for monkeys and colorful birds such as Knysna turaco, Narina trogon and half-collared kingfisher.

On 3 February 1488, the Portuguese navigator Bartolomeu Dias became the first European to set foot on South African soil when he landed at Mossel Bay. Two years after that, at the very same site, his compatriot Pedro de Ataide inadvertently established what is widely regarded to be South Africa’s oldest ‘post office’ when he left a letter in a shoe suspended from a milkwood tree. More than five centuries later, the so-called Post Office Tree still stands on the grounds of Mossel Bay’s Dias Museum Complex, which also houses a life-size replica of one of the caravel ships commanded by Dias, and other displays relating to the early maritime history of South Africa.

Storms River Mouth is the focal point of the Tsitsikamma Sector of Garden Route National Park, which protects a rugged 40-mile coastline of rock cliffs incised by forested river gorges. Here, a short boardwalk stroll leads to a wobbly suspension bridge that spans the mouth of the Storms River, an elemental spectacle as the water surges through a sheer-sided gorge into the raging surf. Near the bridge, Strandloper (Beachcomber) Cave is named for the hunter-gatherers that sheltered there 2,000 years ago.

Catch Some Sun and Surf at Plettenberg Bay

It isn’t difficult to see why Plettenberg Bay was named Baia Formosa (Beautiful Bay) by early Portuguese navigators. Lined by a long sandy beach that usually offers perfect conditions for sunbathing, swimming, and surfing, this popular seaside town is probably the most conventional beach resort on the Garden Route, and certainly the most upmarket. We always enjoy its varied selection of seafront restaurants and have often seen dolphins swimming in the bay while we eat.

Canoe stop on the Touw River

Bloukrans Bridge Bungy: A Must-Do In The Bucket List Of Every Thrill Seeker