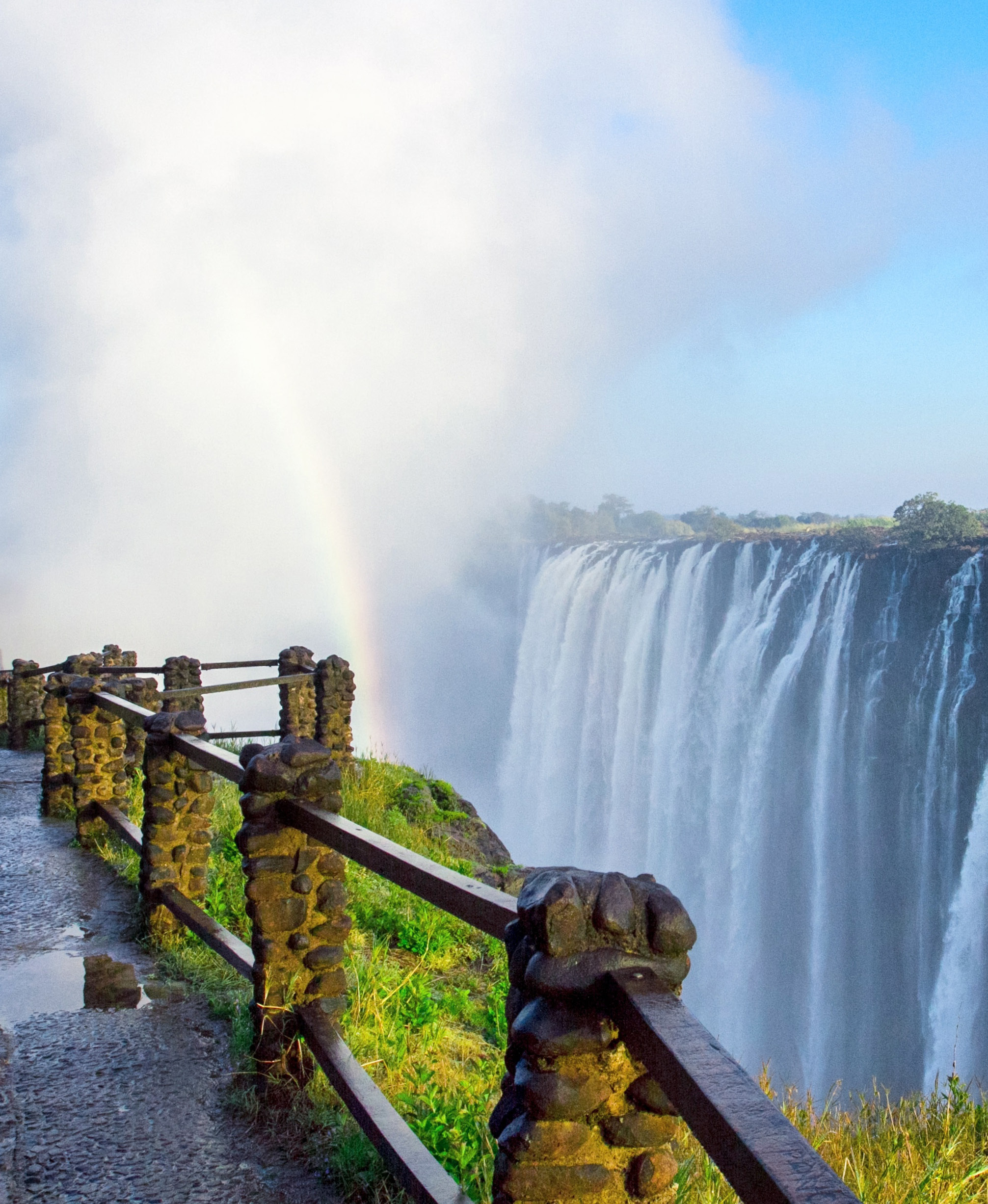 12 Best Things To Do In And Around Victoria Falls

Boasting a primal setting on the jungle-lined Zambezi as it flows along the border of Zambia and Zimbabwe, the mile-wide, 350ft-high Victoria Falls is the world’s largest single sheet of falling water, kicking up a roaring plume of spray visible from 30 miles away. Listed by National Geographic as one of the seven wonders of the natural world, Vic Falls – as it’s known locally – stands close to the top of most African bucket lists and is the scenic highlight of many a safari itinerary. In recent years, it has also emerged as the focal point for an alluring bouquet of adrenaline and other fun activities, ranging from bungee jumping and white-water rafting to walking safaris and steam train outings. Here are some of our favorite activities in the vicinity of Victoria Falls.

There’s no shortage of vantage points offering breathtaking views over Victoria Falls. Most famous perhaps is Zimbabwe’s Victoria Falls Rainforest National Park, which offers a classic front-on view from a patch of jungle inhabited by Bambi-like bushbuck and charismatic hornbills and turacos. My personal favorite is Zambia’s Knife Edge Bridge, which leads to a cliff directly in front of the eastern cataract, an exhilaratingly drenching experience when the water is high. For a completely different view, you can hike down a steep footpath to below the base of the waterfall.

Literally the most immersive way to experience Victoria Falls, the Devil’s Pool is a 10-foot-deep natural pool separated from the rim of the raging waterfall by the narrowest of rock lips. Accessible only on guided tours, the pool stands almost midway across the mile-wide waterfall, close to Livingstone Island, from where you can either swim or wade across. This is usually only permitted from mid-August to end December, when the flow is at its weakest, with October and November being the most reliable months for a devilish dip.

Possibly the most spectacular vantage point over Victoria Falls, though certainly not the cheapest, the short helicopter ride dubbed the ‘Flight of Angels’ alludes to the declaration by David Livingstone (the first European to visit the landmark, back in 1855) that “scenes so lovely must have been gazed upon by angels in their flight”.

The Victoria Falls Bridge, immediately downstream of the waterfall, is not only a vital road link between Zambia and Zimbabwe, it also serves as the launch for one of the world’s most spectacular and highest bungee jumps, plummeting an adrenaline-spiking 364 foot into the scenic Zambezi Gorge.

Boiling Pot, Gnashing Jaws of Death, Oblivion… these are just some of the individual names given to the series of Grade 4 and 5 rapids that punctuate an explosive 15-mile stretch of the Zambezi as it hurtles through the narrow, 650-foot-deep gorge below Victoria Falls. It adds up to possibly the world’s most thrilling white water-rafting destination, and several reputable operators run all-inclusive day packages except over April and May, when the water is dangerously high. Other adrenaline charged white-water experiences include river-boarding and kayaking.

In striking contrast to the tumultuous Zambezi gorge, the jungle-fringed stretch of river upstream of Victoria Falls is wide, flat, meandering, and dotted with lushly vegetated islands. The calm conditions are perfect for a relaxed canoe trip, with plentiful hippos and crocs to keep things exciting. The aquatic birdlife is truly wonderful, and lucky paddlers might see elephants and other wildlife come down to drink.

The towering plume of spray kicked up by Victoria Falls refracts a near-permanent rainbow on the sunny days that are typical of the area. A more unusual phenomenon is the eerie lunar ‘rainbow’ that usually adorns the spray on full moon, and one night either side of it, between February and September.

Situated on the Zimbabwean bank of the Zambezi 15 minutes’ walk from Victoria Falls town, the Big Tree is a magnificent centuries-old baobab formerly used as a campsite by early European traders. Birdwatching en route is excellent, but keep a wary eye open for elephants and buffalos.

Although Victoria Falls doesn’t belong in the upper echelons of African safari destinations, there is a fair amount of wildlife in the area. The best place to see animals is the small but well-stocked Mosi-oa-Tunya National Park, which hosts the likes of white rhino, giraffe, buffalo, zebra, hippo, warthog and various monkeys and antelopes. No large predators other than crocodile are present, so while the park can be explored by vehicle, it’s more fun and rewarding to book onto a walking safari guided by a local expert.

Arguably the most prestigious lodging anywhere in Zimbabwe, the five-star Victoria Falls Hotel was originally built in 1904 to accommodate workers on the Cape-to-Cairo Railway. The stately Edwardian edifice is set in gorgeous gardens overlooking Victoria Falls Bridge, and it has long been renowned for the decadently sumptuous High Tea served at 3pm daily on the wide Stanley’s Terrace.

Only 50 miles west of Victoria Falls, Chobe National Park is indisputably one of Africa’s top safari destinations, and famed for its dense elephant population, which might exceed 100,000 over April to October. Lion, leopard, buffalo, hippo, giraffe, zebra and various antelope might also be seen from boat safaris on the Chobe River or game drives along a network of tracks to the immediate south. For those with limited time, a day trip to Chobe is a viable option out of Victoria Falls, but an overnight stay in the park will be more rewarding.