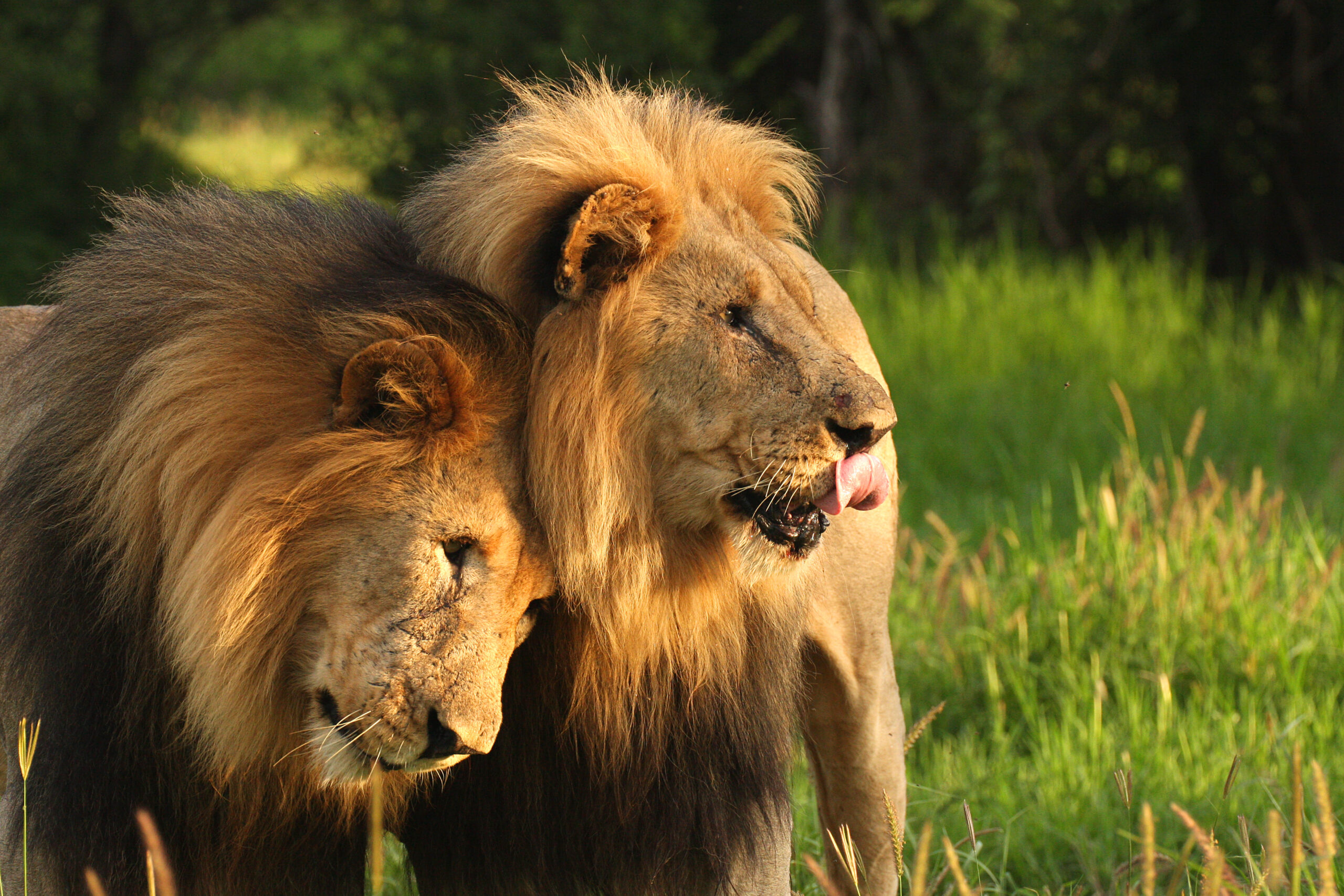 10 things you need to know about Africa’s amazing lions

Africa’s apex predator, the lion is feared by most other animals smaller than an adult rhino or elephant. The so-called King of the Jungle also exerts a unique fascination over people and tops the wish list of most first-time (and many repeats) safarigoers. In a previous blog, we’ve discussed some of Africa’s best safari destinations for lion sightings. But if, before going on safari, you also want to learn more about the habits of Africa’s most charismatic carnivore, then read on here.

The lion is Africa’s largest carnivore

No other African carnivore compares in size to the lion. Indeed, with a shoulder height of 4ft, a body length of up to 7ft (excluding the tail), and an average weight of 350-450lb, the lion ranks second only to the tiger among the world’s 39 species of felid. Male lions are typically more than 50% bulkier than females, a trait that’s exaggerated by their impressive manes. Surprisingly, however, while the lion indisputably takes the top spot among Africa’s mammalian carnivores, the continent is home to one non-marine predator that is significantly larger. This is the Nile crocodile, a freshwater reptile that can live for more than a century and grow to be twice as bulky as the largest lion.

No other cats are sociable as lions

The lion is unique among felids in being deeply sociable. Where other wild cats are essentially solitary creatures that avoid each other’s company except when mating or raising cubs, lions are more like dogs or wolves insofar as they live in prides of up to 20 individuals. A typical pride might have one alpha male, two to five adult or subadult females (often but not always closely related), and up to a dozen juveniles and cubs. Many larger lion prides are presided over by a coalition of two to four males, generally but not always litter mates.

Lions have a varied repertoire of calls

Movie buffs will be familiar with the hearty roar of the MGM lion. Audible for a distance of up to 5 miles, and often heard resonating through safari camps at night, this is one of many evocative sounds made by lions in the wild. Even more common is the low, repetitive, and far-carrying grunting call made when pride members converse at a distance. Softer noises used for close-up communication include purring, moaning, snarling, and coughing. Lions are also strong on non-verbal communication such as greeting, licking, and tooth-baring.

Female lions do most of the hunting

Hunting is a cooperative activity usually undertaken by all the females in the pride. A common strategy is for one or two individuals to herd a group of prey animals towards an ‘escape route’ where another one lies low in waiting. It is generally quite easy to see when lions are in hunting mode, as they tend to walk with a more low-slung gait, an alert expression. and ears pinned back. In most areas, the favored prey of lions is large or medium-sized ungulates such as wildebeest, impala, and zebra, but larger prides frequently down adult giraffes and buffalos. Hunting is generally undertaken at night, or shortly before or after dusk or dawn, but there are exceptions. And while hunting is mostly done by females, feeding rights go to the dominant male, who will frequently emerge, seemingly from nowhere, to exercise his right within minutes of a fresh kill.

Despite this, it’s tough being a male lion

Lion prides are fiercely territorial and encounter with rivals frequently result in fights to the death. This is particularly the case with males, whose lives are dominated by one overriding impulse: to acquire and defend their mating status over as many females as possible. Alpha males and coalitions regularly need to defend their pride against pretenders. When takeovers do occur, the usurpers usually kill all the pride’s cubs to eliminate future rivals from another lineage and to stimulate the females into estrus. In stable lion prides, the alpha male will usually boot out his own male offspring when they become subadults, as patricidal takeovers are not uncommon. One way or another, the percentage of male lion cubs that live to a ripe old age is very, very low.

Mating lions possess enviable stamina. When a female goes into heat, she and the alpha male will isolate from the rest of the pride and mate at regular intervals of around 15 minutes until they are too tired or hungry to continue. This mating ritual can easily continue for three days, which adds up to an extraordinary total of 300-odd individual acts of copulation. Despite this, there is nothing romantic about lions mating. The act itself typically takes between 20 seconds and one minute, and it is preceded and followed by plenty of aggressive biting, hissing, and growling.

Lions are among the world’s laziest animals

When not feeding, fighting, or mating, lions are remarkably languorous. Adults typically spend at least 20 hours of any given day sleeping or resting, and when they do move distances, it is usually at night or in the cool of the early morning. As a result, you’re most likely to catch lions in action – adults walking, hunting, or greeting, or cubs playing with puppyish enthusiasm – within an hour of the sun rising, or shortly before dusk. When on safari, bear in mind that if you locate a pride at rest more than an hour after sunrise, it is usually worth returning to the same spot in the late afternoon. By contrast, with the exception of mating pairs, lions seen in the evening will seldom be encountered in the same place the next morning.

Lions differ from most other cats in that they are almost exclusively terrestrial throughout much of their range and look comically clumsy when they do attempt to climb a tree. As a result, you could easily spend a year in certain African safari destinations – Greater Kruger, for instance, or Etosha or Hwange – and not see a single lion up a tree. Despite this, there are a few specific areas in East Africa where tree-climbing lions are frequently observed, notably Lake Manyara National Park, parts of the southern and central Serengeti, and the Ishasha sector of Queen Elizabeth National Park. The reason for this unusual behavior is a matter of conjecture, but the most likely explanation is that it was initiated to escape the attention of biting flies during an epidemic of these annoying creatures, and it has since become part of the local lion culture.

Lions once lived wild in most of Europe and Asia

Today we tend to think of lions as living exclusively in sub-Saharan Africa. But this wasn’t the case in ancient times, when a global population of more than one million lions ranged across much of Europe, Asia, and the Middle East, occupying most habitats other than desert and rainforest < https://brilliantmaps.com/distribution-of-lions>. Their last European outpost was the Caucasus (between the Black and Caspian Seas), where lions probably became extinct about 1,000 years ago. Lions survived in North Africa and the Middle East into the early 20th century, while the once plentiful Asian population has been reduced to about 675 individuals concentrated in one national park in the Indian province of Gujarat.

Because lions are so conspicuous in many major African safari destinations, it is easy to underestimate how rapidly numbers are in decline. In the early 20th century, it is thought that more than 200,000 lions still roamed the wilds of Africa. By the 1990s, numbers had declined to perhaps 50,000, while today most estimates are in the ballpark of 15-25,000, up to half of which lives in Tanzania. The main reason for this decline is conflict with humans, particularly outside of national parks, where lions frequently prey on livestock and can pose a more direct threat to local villagers.

The increased difficulty of moving between protected areas without coming into conflict with humans has caused Africa’s lions to become very fragmented. Today, there are perhaps a dozen African ecosystems that still sustain genetically viable populations, among them Serengeti-Mara, Nyerere-Niassa, Kavango-Zambezi, and Greater Kruger. In southern Africa particularly, many smaller and more isolated reserves now regularly relocate lions between them to ensure genetic variety. All the same, it is probably only a matter of time before the IUCN Red List assessment of lions as Vulnerable is changed to Endangered.