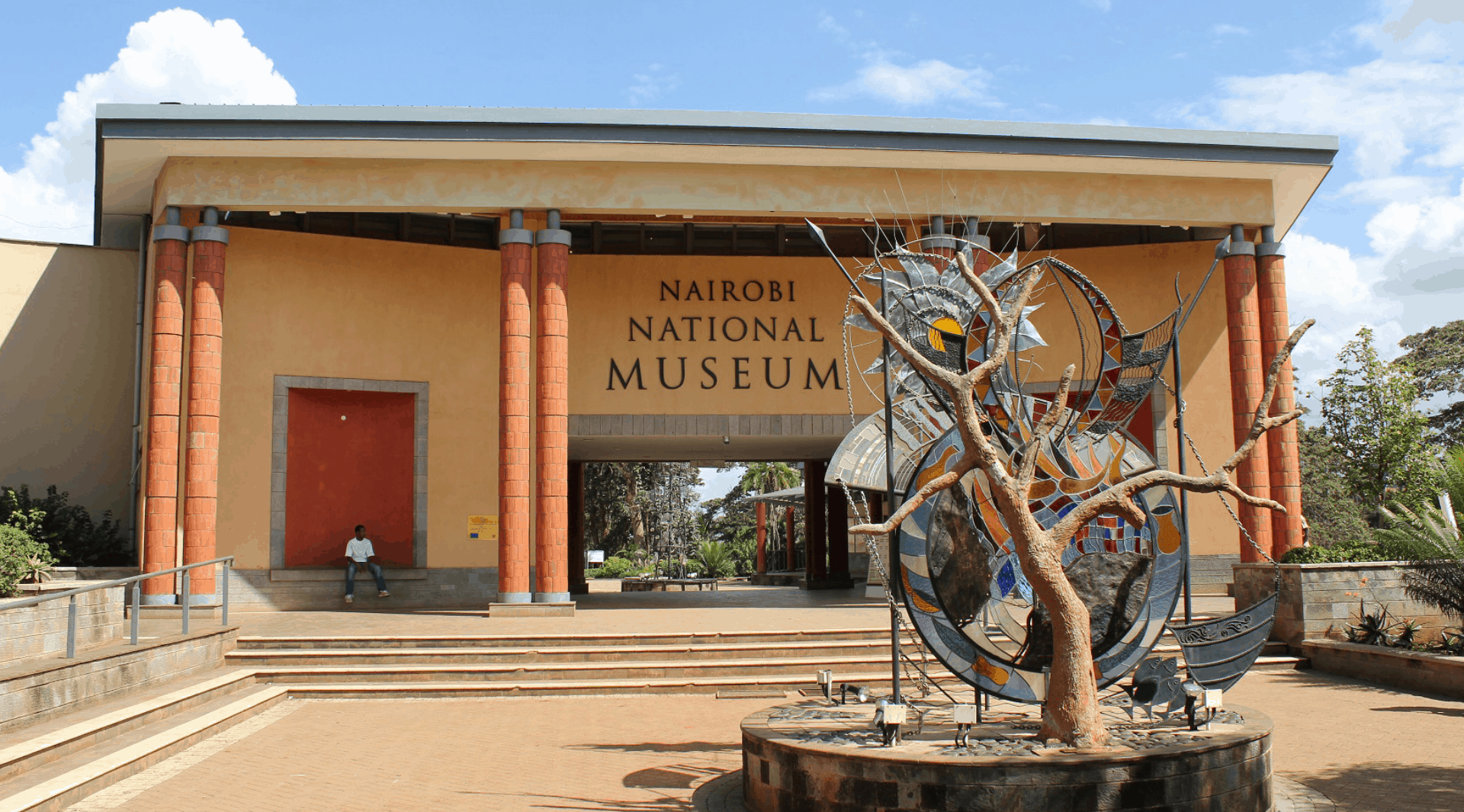 10 best art galleries to visit on an East African safari

East Africa’s wealth of ethnic painting and sculptural traditions inform a vibrant but often overlooked contemporary art scene. It’s easy enough to explore this exciting aspect of the region when you’re on safari, as many of East Africa’s top art galleries can be found in springboard cities such as Nairobi, Dar es Salaam, Kampala, and Uganda. Here we suggest some of the most interesting galleries to visit on an East African safari, whether you only want to look or you’re thinking of buying a painting or sculpture as a souvenir of your time in the region.

The grand dame of Kenyan art galleries stands in a handsome Victorian building in the heart of central Nairobi. One of the city’s oldest structures, it was built in 1913 as a government registry office and went on to serve as a courthouse, provincial administration building, and KANU office before opening as an art gallery in 2005. Administered by the National Museums of Kenya, it is home to the Murumbi Gallery, which displays a vast and eclectic collection of pan-African artworks and other culturally significant artifacts amassed by Kenya’s second Vice-President Joseph Murumbi and his wife Stella. Joseph Murumbi was also a co-founder of Nairobi’s African Heritage Gallery, which opened in the early 1970s as the continent’s first pan-African gallery and helped introduce several pioneering African artists to a wider market. The Nairobi Gallery continues this tradition with its Pioneer Art Gallery, a space used for temporary exhibitions that promote emerging African artists from Kenya and beyond.

Dar es Salaam is the home of the colorful, accessible, and evocative painting style pioneered in the early 1960s by its namesake Edward Saida Tingatinga. Fusing the vibrant work of Congolese immigrants with Makonde traditions indigenous to his homeland bordering Mozambique, Tingatinga created a distinctively surreal school of pop art notable for its bold colors and stylized, often cartoon-like depictions of wildlife, birds, natural features, and urban scenes. His commercial success spawned a host of imitators, and shortly after his death – an innocent bystander in a 1972 police shoot-out – the Tingatinga Arts Cooperative formed, with government backing, alongside the original Morogoro Store where he formerly displayed his pioneering work. Fifty years later, the original cooperative is still there, and it now showcases the work of more than 60 different artists, making it a fine place to enjoy a varied selection of Tingatinga canvasses.

Kampala’s leading private gallery, founded in 2002 by the entrepreneurial Ugandan artist Daudi Karungi, focuses on the work of contemporary artists from all over the continent. It showcases the work of more than 20 painters and sculptors, including several up-and-coming young Ugandans, as well as artists from Kenya, Tanzania, Sudan, and Mozambique, and also hosts regular temporary exhibitions in association with galleries and art fairs in the USA, France, Portugal, London, South Africa, and Nigeria.

This incredible private collection opened in 2022 in the small town of Nyanza, which once served as the royal capital of Rwanda and is also home to a restored thatch palace originally built in 1899 for King Yuhi V Musinga. The museum is the brainchild of a retired Rwandan art lover who accumulated hundreds of traditional Congolese artworks over several years of living in Kinshasa. A superb and thoughtfully curated collection, it incorporates all manner of wooden sculptures, sacred masks, sarcophagus statues, and other traditional pieces, many of which emphasize the role of women in African culture. It’s an amazing place to wander around, especially as many of the traditional sculptures are more than 100 years old and possess a deep spiritual significance.

Set in the atmospheric heart of Zanzibar’s labyrinthine Stone Town, this specialized low-key gallery has pioneered a unique, inventive, and very appealing artistic style informed by traditional floral and feathery patterns associated with henna hand paintings. Many of the canvases on display have a quirky contemporary feel, reminiscent in some cases of Tingatinga paintings, but the intricate patterns embedded within have centuries-old roots in traditional Islamic art. The eight artists whose work is on display at Hurumzi are all female and they operate collectively under the Zanzibar Young Artist Association (ZAYAA).

The most prestigious exhibition space on Kenya’s popular Indian Ocean coastline, Diani Beach Art Gallery is an airy, spaciously laid out installation where you can view an eclectic selection of contemporary paintings, sculptures, and mixed media artwork artworks by more than 70 artists from 20 African countries. Founded in 2010, the gallery is strongly committed to highlighting exciting new work by fresh talents, but several established artists are also represented. If you’re thinking of buying, the staff here are passionate about art and very experienced in shipping overseas.

Rwanda’s premier art museum stands in a building steeped in tragic history. Formerly the Presidential Palace Museum, it was built for President Juvenal Habyarimana, who lived there for several years prior to 6 April 1994 when his plane was shot down by assassins, killing every last person on board and sparking a genocide that claimed up to one million lives. The palace reopened as an art gallery in 2018 and it now houses a collection of 127 contemporary paintings and sculptures created by more than 50 different Rwandan artists. The artworks all share a common theme of ‘Art for Peace’ and the collection is designed to highlight the originality and imagination applied by Rwanda’s artists when it comes to melding traditional and modern influences. Soberingly, the remains of the plane in which President Habyarimana died, alongside his Burundian counterpart President Cyprien Ntaryamira, are scattered on the museum grounds.

Founded in 1964, Uganda’s National Gallery and premier art installation is housed in a tin-roofed colonial bungalow built in the 1930s in a shady garden close to Kampala’s State House. The name Nommo, which derives from a word associated with artistic creativity, is said not to be of East African origin but was instead adopted from the work of the South African writer and anti-apartheid activist Dr. Es’kia Mphahlele. The gallery is rather unimposing from the outside, despite its age and status as an architectural monument. Once inside, however, you’ll be treated to an impressive (and regularly changing) collection of contemporary paintings and sculptures sourced from more than 200 artists hailing from Uganda and elsewhere in Africa.

Arguably the best commercial art gallery in Nairobi, Artz is located on the ground floor of the Village Market, an immense family-friendly mall – complete with cinemas, a bowling alley, and a trampoline park – in suburban Gigiri. Some of East Africa’s best-known artists are represented here, among them Daniel Njoroge, Jane Wanjeri, and Hendrick Lilanga, along with many emerging new talents. Overall, it’s difficult to imagine you’ll find a larger or more varied selection of contemporary paintings for sale elsewhere in East Africa. As with Diani Beach Art Gallery, Artz is run by enthusiasts and geared up for international shipping.

Adorned with countless paintings, some dating back many thousands of years, this alfresco gallery on the Rift Valley escarpment south of Tarangire National Park was inscribed as a UNESCO World Heritage Site in 2006 and ranks among East Africa’s most underrated cultural attractions. Though it features on very few tour itineraries, Kondoa is easily tagged onto a northern Tanzania safari, especially now that a well-surfaced road leads to within a few miles of its most famous painted shelter near the village of Kolo. This is Mungomi wa Kolo, literally ‘Dancers of Kolo’. The focal point of this fascinating panel, surrounded by a menagerie of painted giraffes, zebras, and other wildlife, is an impressionistic depiction of ant-like humanoids engaged in what some experts think is a ritualistic dance and others an abduction. For rock art enthusiasts, another 150 painted shelters lie within the UNESCO World Heritage Site, and several other sites have recently been identified in the nearby Swaga Swaga Wildlife Reserve.