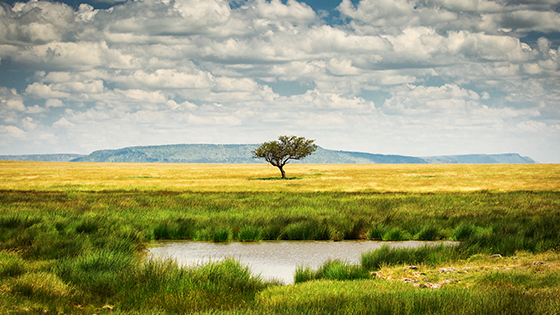 Scenically, Northern Tanzania is consistently rewarding, thanks to a liberal scattering of mountains and lakes associated with the majestic Great Rift Valley. Culturally, it’s also a fascinating region, home to the hunter-gatherer Hadza as well as traditional pastoralists such as the Maasai and Barabaig. But the main attraction of Northern Tanzania is undoubtedly the wildlife viewing associated with what is probably Africa’s finest safari circuit.

Here, ranging from the world-famous Serengeti and Kilimanjaro to the relatively obscure like of Lakes Eyasi and Natron, are the top ten places we think you should consider including on a safari itinerary to northern Tanzania.

The lynchpin of most safaris in northern Tanzania, Serengeti National Park is the core of a 30,000 sq km cross-border ecosystem that forms the arena of an annual migration comprising two million wildebeest, zebra and other ungulates. Even when the migration is out of range, the sheer volume of wildlife that inhabits the Serengeti makes for peerless game viewing. Certainly, there are few if any other safari destinations that offer such a good chance of spotting all three of Africa’s large cats – lion, leopard and cheetah – in the course of a day. Most Serengeti safaris focus on the plains southeast of the Seronera park headquarters, but for those with sufficient time and resources, it’s worth heading further afield to explore the northerly Mara River region or the Western Corridor.

This scenic showstopper – a vast volcanic caldera, offering mind-blowing views from the rim to the grassy floor 2,000ft below – is the centerpiece of the Ngorongoro Conservation Area, an extension of the Serengeti National Park where Maasai pastoralists still herd their cattle amidst herds of big game. A natural sanctuary within a sanctuary, the 100-square-mile crater floor provides refuge to the world’s densest concentrations of lion and spotted hyena, as well as some seriously impressive tuskers and Tanzania’s most conspicuous population of the endangered black rhino.

It was here, in 1959, on the border of Serengeti National Park and Ngorongoro Conservation Area, that the paleontologist Mary Leakey unearthed the so-called  ‘Nutcracker Man’ jawbone, in the process providing the first conclusive fossil evidence that human evolution stretched back more than a million years and had been enacted on the plains of East Africa. The site museum here is a thoroughly worthwhile stop, and the surrounding scrub is also rich in colorful dry-country birds.

Spectacularly sited at the base of the Rift Escarpment, fluctuating Lake Manyara lends it name to a national park as small in area as it is strong on ecological diversity. In addition to the open waters of the lake, habitats protected within the park include lush groundwater forest, grassy lake floodplains, tracts of thick acacia woodland, tall rocky cliffs, and a field of hot springs. Reliable wildlife highlights include plentiful elephants, habituated troops of blue monkey and olive baboon, and the prolific birdlife (a novice birdwatcher might easily tick 100 species in a day here). Manyara is also renowned for its tree-climbing lions, which are seen in arboreal action with some regularity, but not on a daily basis.

The baobab-studded grassland of Tarangire National Park, just two hours’ drive from Arusha on a surfaced road, peaks in wildlife activity in the second half of the year, when the near-perennial Tarangire River forms the only reliable source of drinking water for many miles around.  Expect to see prodigious herds of elephant, giraffe, zebra and antelope in this underrated national park, which can also be good for lion and leopard, as well as smaller predators such as dwarf mongoose and genet.

This scenic small park is the perfect itinerary filler for anybody with a spare half day in the vicinity of Arusha, the bustling small town that serves as the springboard for most safaris in northern Tanzania. Little more than 50 square miles in extent, the park protects several unusual habitats. The lush Afro-montane forest that encloses Ngurdoto Crater is home to athletic troops of black-and-white colobus, while kayaking excursions on the Momella Lakes often offer close-up views of buffalo, waterbuck and myriad waterfowl. Set within the park, Mount Meru is a collapsed stratovolcano whose craggy 14,968ft peak often emerges at dusk in duet with nearby Kilimanjaro.

A spine-jarring 4-5 hour drive north of Manyara, Natron is the starkest and most forbidding of Tanzania’s Rift Valley lakes, a caustic and malodorous sump whose ammonic waters regularly top the 120°F mark. Incredibly, this is the most important African breeding site for flamingos, though the breeding grounds used by these striking birds are somewhat inaccessible. Overshadowing the lake, the 10,459ft Ol Doinyo Lengai (a Maasai name meaning ‘Mountain of God’) is East Africa’s most active volcano, and its otherworldly caldera can be ascended in 5-6 hours, ideally at night.

This shallow saline lake at the base of the Rift Escarpment base can be spectacularly scenic towards sunset but it is best known as being home to the Hadza, northern Tanzania’s only remaining hunter-gatherer people. With advance warning, it’s possible to join a traditional hunt – be warned, however, that their favoured prey is primates, and guests get first refusal of the ultimate Hadza culinary treat, an uncooked baboon liver!

Inscribed in 2006, this under-publicized UNESCO World Heritage Site comprises around 150 painted rock shelters scattered over the Rift Valley escarpment south of Tarangire National Park. The ancient artists are not the subject of a reliable local oral tradition, so little is known about them, but some of the paintings are thought to be several thousands of years old. For visitors with limited time, the mysterious panel known as Mungomi wa Kolo, with its impressionistic depictions of humanoid figures engaged in ritualistic dances, could be visited as a day trip out of Tarangire National Park.

The world’s highest free-standing mountain, Kilimanjaro towers almost three miles above the surrounding dry plains, and its snow-capped peak ranks high among Africa’s top travel icons. It can be a skittish landmark, often spending most of the day swathed in clouds, only to emerge at dawn and dusk, when it is readily visible from Arusha National Park, though closer views are obtained from the towns of Moshi or Marangu. More ambitiously, you can hike to Kilimanjaro’s 19,341ft summit, the highest point in Africa, but you need to set aside at least five days in order to do so.