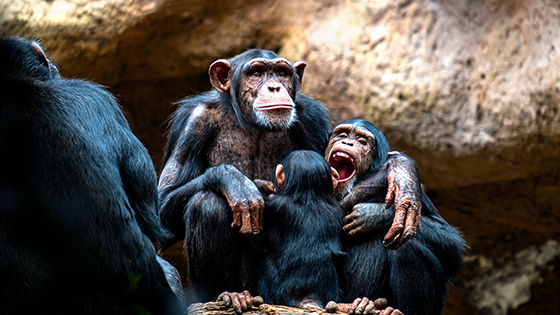 Africa is home to more than 100 primate species. These range from the 40-stone silverback gorillas that lumber pot-bellied through the rainforest interior to the squirrel-sized bushbabies whose spectral wails haunt the bush by night. There are also several dozen different monkey species, a few oddities such as the nocturnal sloth-like potto, and of course man’s closest relative, the chimpanzee.

When it comes to planning an African safari itinerary, the primate focus tends to be on tracking gorillas and chimpanzees; rightly so, given that these rank among the world’s most iconic wildlife experiences. But other less celebrated primates – from the mischievous vervet monkey and pugnacious baboon to the agile colobuses and bug-eyed bushbabies – are also well worth seeking out, since they add plenty of entertainment value to any forest walk or game drive.

Although it can be physically demanding, tracking gorillas through their misty mountain home is a singularly thrilling experience, from that first glimpse of a silverback chewing solemnly on a bamboo shoot to the comic sight of an adolescent fluffball attempting to climb a tree. Meeting gorillas is also, for many, a spiritual and epiphanic moment: like the legendary primatologist Dian Fossey wrote of one of her earliest encounter with an adult female: “On perceiving the softness, tranquillity, and trust conveyed by her eyes, I was overwhelmed by the extraordinary depth of our rapport”.

Fossey undertook her research in Volcanoes National Park, which protects the Rwandan slopes of Virunga Mountains, a majestic string of active and dormant volcanoes that runs along the Congolese and Ugandan border. Partly thanks to the Fossey association, Rwanda is Africa’s best known gorilla-tracking destination, but these magnificent apes can be tracked more affordably in two Ugandan national parks, Mgahinga and Bwindi Impenetrable, as well as in the Congolese Virunga National Park.

Locating chimpanzees can be more frustrating than tracking gorillas. This is because, where gorillas are sedentary creatures that seldom move more than a mile over the course of any given day, chimps typically range widely through the forest looking for food and patrolling their territory. On an off day, the experience can amount, in the words of one disgruntled fellow tracker a few years back, to little more than “chasing a few black furry bundles through the forest”. But when eventually it all comes together, as it usually does, and you catch the chimps feeding on a fruit tree, or grooming on the forest floor, or embarking on an arboreal monkey hunt, it is both thrilling and enthralling to watch these unexpectedly large apes go about their business. Even when you don’t get a good close-up view, the chimp’s extraordinary ‘pant-hoot’ call – a hysterically explosive, group-bonding ritual – is simply one of Africa’s most spine-chilling sounds.

Several sites in Africa offer excellent chimp tracking. My favorite, set on the mountainous eastern shore of Tanzania’s remote Lake Tanganyika, is Mahale Mountains National Park, which is home to an estimated 1,000 chimpanzees, including a super-relaxed 80-strong community first habituated by Japanese researchers in the 1960s. Also lapped by the waters of Lake Tanganyika, Gombe Stream National Park is less scenic and far smaller than the Mahale Mountains, but more famous thanks to its association with Jane Goodall, who initiated what is now the world’s longest-running behavioral study there in 1960. Both offer equally reliable chimp tracking.

When it comes to cost and accessibility, Uganda surpasses Tanzania as Africa’s most attractive chimp destination, though the denser nature of the forest undergrowth can make for more challenging tracking conditions. Kibale Forest National Park is Uganda’s most reliable chimp tracking site, closely followed by Budongo Forest and Kalinzu Forest. Another popular location for chimp tracking is Rwanda’s Nyungwe Forest National Park.

For those daunted at the prospect of chasing black furry bundles through the forest, the alternative is a visit to Uganda’s Ngamba Island, Kenya’s Sweetwaters Sanctuary or South Africa Chimp Eden, all of which are affiliated to the Jane Goodall Trust and house a community of orphaned and rescued chimps in semi-natural conditions.

Represented by more than 70 species, Africa’s monkeys are split into two main groups. These are the strictly arboreal, leaf-eating, and highly acrobatic colobus monkeys, all of which are confined to tropical latitudes, and the more diverse and widespread cheek-pouch monkeys.

The latter group includes the savanna-dwelling baboons and vervet monkeys, both of which move in large close-knit troops whose complex and varied behavior – playing and quarreling, grooming and bullying, mating and foraging – is fascinating to observe, not least because so much of it has clear human parallels. Both are common in most major safari destinations, from Kruger and Etosha to Serengeti and Amboseli, but the large baboon troops that inhabit Tanzania’s Lake Manyara National Park are particularly unselfconscious and entertaining to watch.

Certain reserves stand out for offering the opportunity to get close to habituated groups of one specific type of monkey. Zanzibar’s Jozani Forest Reserve is the main refuge for the Zanzibar red colobus, an Endangered island endemic notable for the unkempt fringe that gives the male the appearance of a mad scientist. And while the Virunga Mountains are best known for their mountain gorillas, they also form the last stronghold of the Endangered golden monkey, which can be tracked through the bamboo forests of  Rwanda’s Volcanoes National Park and Uganda’s Mgahinga National Park.

Probably my favorite African primate to spend time with is the gelada monkey, a grass-eating proto-baboon that is unique to the highlands of Ethiopia and thought to have the most complex social structure of any creature other than humans. Distinguished by the male’s spectacular golden mane and bright red chest patch, these strictly terrestrial monkeys are best seen in Simien Mountains National Park, where troops comprising several hundred individuals are so habituated that you can actually mingle with them as they go about their daily routine.