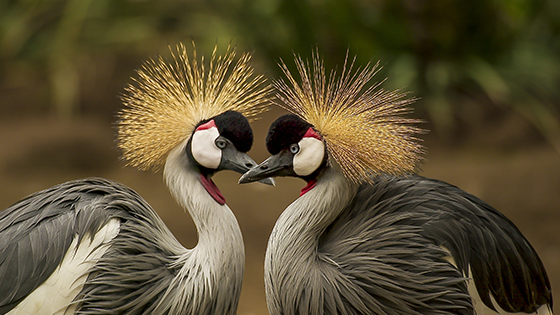 15 Heavyweight Birds to Look Out For on an African Safari

Africa is best known for being home to the Big Five and other large mammals, but it also hosts some of the world’s most impressively bulky birds, including the outsized ostrich, some imperious birds of prey, and many striking aquatic species. Here some of the iconic avian heavyweights you might encounter on a safari in Africa.

The world’s largest bird, standing up to 9ft tall and weighing up to 320lb, the ostrich is an unmistakable resident of open savanna and grassland. The male has a bold black and white plumage, but the female is somewhat dowdier. Although it cannot fly, the ostrich is one of the world’s fastest runners, capable of hitting 45 miles per hour. Ostrich eggs have a capacity of more than 2 pints and were traditionally used by San hunter-gatherers as canteens to carry water.

Where to see it: The open plains of Serengeti-Mara are great ostrich habitat. Ostriches are abundant in the Oudtshoorn region of South Africa, where they are farmed for their cholesterol-free red meat.

Africa’s most recognizable large raptor, the fish eagle has a bold black and white feather pattern offset by a rich chestnut belly and yellow bill. The far-carrying duetting of a monogamous pair is one of the most evocative sounds of the African bush.

Where to see it: In the vicinity of any perennial river or lake. Dense populations are associated with Kenya’s Lake Naivasha and parts of Lake Malawi.

Most people do a double-take when they first see a family of ground hornbills marching comically through the bush. These black turkey-sized birds have conspicuous red-eye and throat wattles, long fluttering eyebrows, and white wing patches visible only in flight. Although they’re mainly terrestrial, ground hornbills are powerful fliers, and they nest in tree cavities.

Where to see it: Widespread but mainly restricted to national parks and other reserves. South Africa’s Kruger National Park is a good place to look for it.

Both African flamingo species are tall pink-tinged birds that habitually stand on one leg. They often aggregate in flocks of several thousand in shallow water, favoring saline lakes that support a high density of the blue-green algae on which they feed.

Where to see it: Rift Valley lakes such as Manyara and Natron in Tanzania, and Nakuru and Bogoria in Kenya, often support high concentrations.

Although it isn’t particularly striking to look at, the hadeda is one of Africa’s most noticeable birds, regularly asserting its presence with the cacophonous cackle for which it is named.

Where to see it: Often associated with suburban gardens, it plays an important pest-control role picking at snails with its long decurved bill.

Standing more than 6ft high, the world’s largest heron has a cryptic purple-grey, chestnut, black and white plumage. It is a strictly aquatic species that feeds mainly on fish but will gulp up any suitably sized prey.

Where to see it: Close to water throughout sub-Saharan Africa. Boat trips in Nyerere (Tanzania), Murchison Falls (Uganda), and Liwonde (Malawi) national parks offer a good chance of spotting it.

One of the world’s oddest birds, this rusty brown aquatic species is named for the hammer-headed appearance created by its long flattened bill and angular crest. Its unique nest is the largest made by any individual African bird – a scruffy construction of branches, mud, and pretty much anything else it can get its beak around.

Where to see it: In the vicinity of the tall waterside trees in which it nests.

The most spectacular of sub-equatorial Africa’s three crane species, Uganda’s national bird is unmistakable with its stiff golden crown, red throat pouch, and bold white cheeks. It’s a real treat to see a pair of crowned cranes perform their courtship ritual, which involves dancing, jumping, and the touching of bills in a kiss-like gesture.

Although it’s unlikely ever to win a beauty contest, the marabou is one of Africa’s largest and most impressive birds, and unmistakable with its bald scabrous head, fleshy neck-pouch, and a funereal stance befitting a creature that feeds mainly on carrion.

Where to see it: Alongside vultures in the vicinity of kills in most safari destinations. It adapts well to urban habitats and is common in the Ugandan capital Kampala.

Often seen walking ponderously through the tall grass like a smaller, sturdier variation on an ostrich, the Kori bustard is the world’s heaviest flying bird, weighing up to 40lb, albeit with a smaller wingspan than the Andean condor. Its elaborate courtship ritual is marvelous to witness.

Where to see it: This grassland bird is particularly common in the Serengeti-Mara ecosystem of Tanzania and Kenya.

It might not be quite so hefty as its marabou cousin, but the saddle-billed stork is altogether more graceful and handsome. You get bonus points for being able to distinguish males (black eyes, small yellow throat wattle) from females (yellow eyes, no throat wattle).

Where to see it: Nowhere common, but likely to be seen singly or in monogamous pairs in the vicinity of any aquatic habitat.

The world’s most bizarre raptor, the heron-sized secretary bird is distinguished by a prominent black crest and bare orange face. A terrestrial hunter, it feeds on snakes and other small vertebrates, stamping them to death in what appears to be the original funky chicken dance. A strong but reluctant flyer, it requires a long take-off reminiscent of an airplane on a runway.

Where to see it: Widespread in grassland, and particularly common in the Serengeti-Mara, but increasingly rare outside of protected areas.

Among the most eagerly sought of African birds, the shoebill is a hefty slate-grey swamp-dweller whose unique clog-shaped bill makes it look like a refugee from the pages of Dr. Seuss.

Where to see it: Uganda, where top sites include Mabamba Swamp, Toro-Semuliki, and Murchison Falls. Other possibilities include Zambia’s Bangweulu Swamp and Rwanda’s Akagera National Park.

Africa’s largest raptor, the lappet-face is rather handsome as vultures go, with a bald redhead, a blue and ivorybill, and heavy black wings that give it a vampirish appearance when spread wide like a cloak. As with other vultures, it plays a vital sanitation role, clearing the bush of what would otherwise be rotting carcasses.

Where to see it: Now virtually confined to protected areas, it is most often seen in the vicinity of a recent kill.

Africa’s largest waterbird weighs up to 30lb and has a large pouched bill typical of pelicans. It often swims in flotilla formations comprising around 10 individuals.

Where to see it: Good sites for this widespread aquatic bird include the Rift Valley lakes of Kenya and Tanzania and the iSimangaliso Wetlands in South Africa.

Where to see it: The helmeted guineafowl is ubiquitous. In northern Kenya, look out for the vulturine guineafowl, with its iridescent cobalt breast