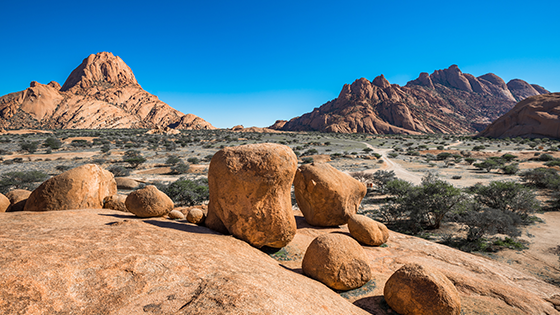 10 Top Things To Do In Namibia

Namibia is one of the emptiest countries on earth. Slightly larger in area than Kenya and Uganda combined, it supports a population of fewer than three million, most of it concentrated in the capital Windhoek and the relatively wet northeast. The rest of the country, teased by less than an inch of rain annually, is crisscrossed by a network of long, lonely, sun-baked roads that can be followed for hours without encountering a hint of human habitation.

Too desiccated to sit comfortably with adjectives such as pretty or beautiful, this immense thirstland does possess a ravaged majesty that is at once humbling, breathtaking, and oddly liberating. By day, occasional signs of life might include a herd of rapier-horned oryx antelope filing across a dune crest, meerkats standing sentry outside their burrow, or an iridescent male sunbird silhouetted against the cloudless blue. By night, panoramic night skies sparkling with uncountable stars are embalmed in a silence broken only by the occasional chatter of a barking gecko or distant whooping of a jackal or a hyena.

Elsewhere, Namibia’s dry climate has preserved some of the world’s oldest and finest rock art, while other highlights include the magnificent dunescapes of Sossusvlei, the gaping wide Fish River Canyon, the immense seal colonies that breed on the bleakly spectacular Atlantic coastline, and the vast Etosha National Park, a superb photographic safari destination that hosts all the Big Five except buffalo

Situated in the incomprehensibly vast Namib-Naukluft National Park, Sossusvlei is the most renowned and compelling of Namibia’s desert landscapes. Here, the world’s tallest dunes tower-like rippled apricot mountains above cracked clay pans that might go decades without holding water. The most haunting of these Hadean parodies of lakes is Deadvlei, where a ghost forest of centuries-dead camelthorns is silhouetted to glorious photogenic effect at dusk and dawn. For energetic travelers, the foot ascent of the 300-meter-tall Dune 45 can be unexpectedly sapping, as the fine orange sand drags you back one step for every two you take forward, but the panoramic views from the crest more than justify the effort.

The mountainous badlands of Damaraland host a rich repository of prehistoric rock art dating back several thousand years. The most accessible of the region’s alfresco art galleries is Twyfelfontein (literally ‘Spring of Doubt’), a UNESCO World Heritage Site whose 2,000-odd engravings and paintings include several striking therianthropic (half-human, half-animal) figures depicting shamans in a mystical trance. Elsewhere in Damaraland, a cluster of community-owned concessions provide an opportunity to track down Southern Africa’s last populations of desert-adapted elephant and black rhino.

The centerpiece of southern Namibia’s Ai-Ais/Richtersveld Transfrontier Park, the 160km-long, 25km-wide, and 550-meter deep Fish River Canyon vies with Ethiopia’s Blue Nile Gorge as the largest geographic feature of its type in Africa. The canyon is staggeringly vast when viewed from the observation points that line its rim, while those seeking a more immersive experience can book onto a five-day self-guided hike along the floor.

Among the most striking of Namibia’s peculiar desert succulents, the quiver tree is a type of aloe whose branches were once hollowed out by local hunter-gatherers as quivers used to hold arrows. Some 250 of these splendidly bizarre trees, the tallest being around 7 meters high and 200-plus years old, grow amongst a set of rocky outcrops at this photogenic national monument near the small town of Keetmanshoop.

Namibia’s premier safari destination is centered on the 4,800-square-kilometre Etosha Pan, an extinct lake of shimmering white salt flats that dried up 15,000 years ago following a change in the course of the Kunene River. The lack of perennial natural water means that buffaloes, hippos, and crocodiles are absent from Etosha, but a series of 50 waterholes flanking the pan attracts plenty of other wildlife, from lion, leopard, and cheetah to elephant, greater kudu, and giraffe. Your best chance of seeing black rhinos is a night-time vigil at Okaukuejo Rest Camp’s floodlit waterhole. For endemic-chasers, Etosha hosts half the global population of 1,000-odd black-faced impala, while a checklist of 350 bird species includes the localized Monteiro’s hornbill, bare-cheeked babbler, and white-tailed shrike. A more opulent variation on the Etosha experience, Ongava Lodge offers all-inclusive guided safaris in a wildlife-rich private sanctuary bordering the national park

Though it lacks the volumes of wildlife associated with Etosha, this scenic table mountain of burnished red sandstone is a favorite with hikers since it offers a rare opportunity to track cheetah, white rhino, giraffe, and various antelope – including roan, sable, greater kudu and eland – on foot. The diverse birdlife includes a cliff-nesting colony of the Endangered Cape vulture.

Namibia’s rain-starved Atlantic ‘Skeleton Coast’ could hardly stand in greater contrast to the lush Indian Ocean beach idylls characteristic of East Africa. The closest approximation to a conventional resort town is Swakopmund, a charming showcase of time-warped Bavarian architecture set on the mouth of a river that flows once in a blue moon. Quaint as it may be, Swakopmund is also a thriving hub of adventure tourism, from skydiving, quad-biking, and sand-boarding to dolphin cruises, sea kayaking, and desert nature drives. Nearby, Walvis Bay Lagoon is a Ramsar wetland frequented by a large number of flamingo, pelican, Damara tern, and various waders. Further afield, Cape Cross, named after a memorial cross erected by the Portuguese navigator Diego Cão in 1486, hosts the world’s largest Cape fur seal colony, comprising around 200,000 adults and 50,000 bleating pups.

Like a smaller, more remote, and even quirkier variation on Swakopmund, the Atlantic fishing port of Lüderitz is renowned for its brightly painted Art Nouveau buildings and scattering of early 20th- century architectural gems. Out-of-town highlights include the marine birdlife at desolate Diaz Point, and the eerie ghost town of Kolmanskop, a diamond-mining boomtown that was abandoned in 1956 and has since been partially swallowed by the surrounding sand.

Bounded by the Kunene River as it courses along the Angola border, Kaokoland is remote and inhospitable even by Namibian standards. It is best known as the home of the Himba, traditional cattle-herders whose semi-nomadic lifestyle remains largely untouched by western influences. Himba women, in particular, are notable for their striking appearance: ochre-tinged hair and skin, cattle-skin attire, and copper jewelry on their arms and necks.

Among the most peculiar legacies of the colonial carve-up of Africa, Caprivi is a narrow strip of flat, well-watered land that extends 450km east from the main body of Namibia towards the upper Zambezi River. The gateway to Caprivi is Popa Falls, where the Kavango River descends through a maze of lushly vegetated islands towards Botswana’s legendary Okavango Delta. Elsewhere, underrated Bwabwata, Mudumu, and Nkasa Rupara National Parks offer good all-round game viewing and sensational wetland birding, including regional specials such as Pel’s fishing owl, wattled crane, slaty egret, Rufous-bellied Heron, and Black-cheeked lovebird.