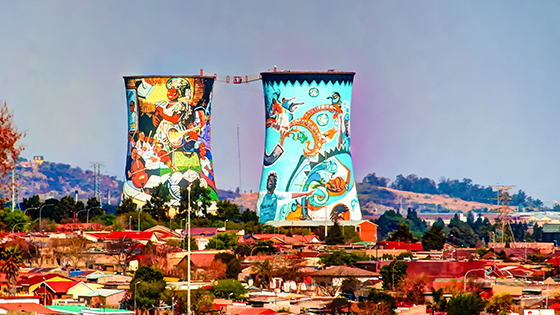 10 Things to do in And Around Johannesburg

The largest and most economically vibrant city in southern Africa, Johannesburg stands at an altitude of 5,000 ft in the densely populated inland province of Gauteng. As the site of O.R. Tambo International Airport, the region’s most important international and domestic flight hub, this sprawling metropolis is the springboard for a high proportion of tours around South Africa. And an unenviable reputation for crime, pollution, traffic congestion, and other urban malaise means that few tourists stay there very long, Johannesburg is surrounded by a diverse selection of potential half-and full-day itinerary fillers. We explore some of the most alluring below.

Explore Humanity’s Distant Past at The Cradle of Humankind

A UNESCO World Heritage Site since 1999, the Cradle of Humankind is a paleontological treasure trove whose gaping limestone caverns and sinkholes have yielded more than half the world’s early hominid fossils. Its focal point is the innovative Maropeng Visitors Centre, where child-friendly self-guided tours start with a fun but educational boat ride through a subterranean waterway that time travels back to the volatile seismic conditions that helped shape our planet. A guided tour of the nearby Sterkfontein Caves leads past a subterranean lake into the cavern where ‘Mrs. Ples’ – a 2.5 million-year-old Australopithecus africanus skull – was unearthed in 1936 to provide the first physical confirmation of Charles Darwin’s theory that humans evolved in Africa.

Officially opened by Nelson Mandela in 2002, the Apartheid Museum (motto ‘Today, Apartheid is exactly where it belongs: In a museum’) sets out its stall by randomly allocating all visitors with a ‘white’ or ‘non-white’ ticket that determines which of two segregated entrance gates they must use. Inside, old photographs and newsreels, and other displays document the rise of apartheid in 1948, the cruelty and barbarism with which it was enforced over the next four decades, and the collapse that led to the democratic election of 1994.

One of the most exciting and underrated day walks in Gauteng is the three-hour hike that circumnavigates the rim of Tswaing Crater. Unlike most craters, this impressive mile-wide landmark is not a volcanic caldera, but was created by a house-sized meteorite that slammed to earth 200,000 years ago, obliterating all life within a 20-mile radius. The setting is a lot more peaceful today: a small salt lake is nestled on the crater floor, while the rim supports lush acacia woodland teeming with birds and wildlife such as the majestic greater kudu antelope.

Few relics survive of Johannesburg’s early days as a makeshift shantytown founded in 1886 in the wake of the discovery of the world’s richest gold seams. But something of the goldrush era is revived at Gold Reef City, a themed amusement park situated above a 2-mile-deep shaft that produced 1.4 million kilograms of gold between 1897 and 1971. The park is very popular with children, thanks to a selection of two-dozen rides that range from the diverting to the genuinely terrifying. There is also a recreated Victorian mining town where you can watch molten gold being poured into ingot moulds, and Isicathulo ‘gumboot dance’ performances associated with the migrant laborers who worked in the mines.

Every Sunday, the rooftop parking at Rosebank Mall transforms into a cosmopolitan pan-African market where you can shop for all manner of goods reflecting a diversity of African influences: quirky clothing, homemade spices, and sauces, traditional handicrafts, innovative artworks, and much else besides. Foodies will love the globetrotting selection of cuisine on offer too.

Enjoy a Day or Overnight Safari in Dinokeng Game Reserve

One of Gauteng’s most unexpected tourist attractions, the 100-square-mile Dinokeng Game Reserve, which opened in 2011, hosts free-roaming populations of all the Big Five. Dinokeng can be visited on a self-drive day trip out of Johannesburg, but your best chance of spotting the likes of lion, elephant, buffalo, and rhino is to join a guided 4×4 game drive operated by one of the lodges within the reserve. An overnight safari at Dinokeng is a great alternative to staying in Johannesburg or Pretoria.

The most famous of the black ‘townships’ associated with Apartheid, Soweto – an acronym of South West Townships – was formally created under that name in 1963, though its oldest quarter actually dates back to 1904. Once home to Nelson Mandela and Archbishop Desmond Tutu, Soweto was the setting of several pivotal events in the anti-Apartheid struggle.

Minibus tours, guided by a current or former Soweto resident, usually take in Walter Sisulu Square, where the Freedom Charter (precursor to the modern South African constitution) was signed in 1955, and the poignant Hector Pieterson Museum, set a short distance from where its namesake was shot dead by police on 16 July 1976, marking the start of the Soweto Uprising.

Other Soweto landmarks include the humble dwelling where Nelson Mandela lived prior to his imprisonment in 1962, and the FNB Stadium, which hosted South Africa’s championship victory over Tunisia in the 1996 Africa Nations Cup, the 2010 FIFA World Cup between Spain and Netherlands, and one of Mandela’s first speeches following his release in 1990.

Only 30 miles north of Johannesburg, Pretoria was established as the capital of the Boer-ruled Zuid-Afrikaansche Republiek in 1855, and it has served as executive capital of South Africa since 1910. A long tenure as the headquarters of apartheid has tainted the city with a stigma of illiberalism, one enhanced by the fact that organized tours tend to dwell on landmarks that hark back to the ‘old’ South Africa, most famously the Voortrekker Monument, an immense granite hilltop monolith that stands isolated sentinel on the city’s southern outskirts. Changing times have left their mark on other former Whites-only bastions such as the Union Buildings, the handsome sandstone House of Parliament where Nelson Mandela’s presidential inauguration took place in 1994.

With more than 280 species recorded, and a good network of roads and hides, Marievale is arguably Gauteng’s most rewarding location for watching and photographing birds. Species to look out for include African marsh harrier, goliath heron, and purple swamphen. This Ramsar wetland is also home to Cape clawless otters and various small antelope.

Head Out to Cullinan Diamond Mine

Established in 1903 by Sir Thomas Cullinan, this mine north of Pretoria subsequently yielded the world’s largest-ever rough quality gem diamond: the 3,106 carat Star of Africa, which was gifted to King Edward VII of England and cut into nine major pieces (several now on display in the Tower of London as part of the Crown Jewels). Surface tours lead past the gaping hole that marks the site of the original digging, which closed in 1932. Five-hour tours of the underground mine, which opened in 1945 and has been operational ever since, are also offered.