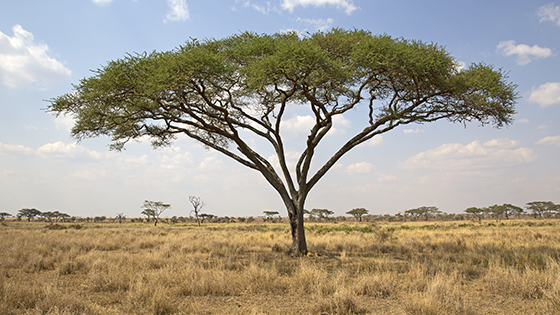 10 Iconic Trees to Look Out For on an African Safari

Trees will probably be the last thing on your mind when you book a safari. But as is the case everywhere else in the world, they form an essential part of most African ecosystems, as a source not only of the oxygen on which we and all other terrestrial creatures depend but also of food, shelter, timber and so much more. Here we highlight ten of the most iconic and beautiful of the many hundreds of tree species associated with Africa’s national parks and other safari destinations.

The first name to come to mind when you think of unusual African trees is the mighty baobab, also known as the upside-down tree, in reference to the root-like appearance of its bare branches – according to legend, this is the result of it having been uprooted by the angry gods. Notable for its fibrous bulbous trunks, the baobab is very slow-growing and some living individuals are thought to be more than 1,500 years old. Rich in vitamin C, the large fruit has a tart sherbet-like tang and is eaten by everything from monkeys to elephants, as well as by people.

Where to see it: Typically associated with relatively arid and low-lying habitats, baobabs are widespread in tropical Africa and particularly prolific in Tanzania’s Tarangire and Ruaha National Parks. The iconic Baines’s Baobabs in central Botswana is a stand of seven trees named after Thomas Baines, a companion of David Livingstone who painted them in 1862.

Evergreen or deciduous depending on local rainfall patterns, the sausage tree has a lush green canopy that stands up to 65 feet tall. Its name refers to the extraordinary hard-shelled fruit, which might grow up to 3 feet long and weigh as much as 25lb. Although the fruit is toxic, it is traditionally hollowed out as a calabash in many parts of its range and is prepared as an alcoholic beverage by the Kikuyu and Akamba of central Kenya.

Where to see it: the sausage tree is widespread in equatorial and southern Africa, where it most often grows alongside rivers and subterranean watercourses.

The most distinctive of Africa’s many acacias, the fever tree is a tall water-associated species distinguished by the eerie yellow-green hue of its smooth photosynthetic bark. It typically grows in stands of a dozen or more trees in swampy areas or on lake verges. The name fever tree refers to the erroneous colonial-era belief that it is responsible for the transmission of malaria (an understandable mistake given that it tends to occur in habitats favored by Anopheles mosquitoes). Ironically, some indigenous cultures use the powdered bark as a malaria prophylactic.

Where to see it: This widespread tropical tree is particularly common on the shore of certain Rift Valley lakes in Kenya, Tanzania and Ethiopia.

Despite its Biblical associations (this, according to the Gospels, is the tree climbed by Zacchaeus to obtain a view of Jesus), the Sycamore is an endemic African tree that was introduced to the Middle East in ancient times. Its yellowish bark and spreading canopy of mulberry-shaped leaves make it one of Africa’s most distinctive forest trees, and the abundant fig-like fruit often attracts a colorful array of frugivorous birds such as turacos, barbets, starlings, and green pigeons.

Where to see it: It is one of the most common and conspicuous trees in riverine forests throughout equatorial and southern Africa.

Most bizarre of the dry-country succulents associated with the arid badlands of South West Africa, the halfmensboom is an Afrikaans name that literally translates as ‘half-human tree’ in reference to its resemblance to a hunched person when seen from a distance. Standing up to 12 foot tall, it possesses a bulbous base and a thick spiny northward-curving stem topped by a small crown of velvety flowers that usually bloom in August.

Where to see it: This localized CITES-listed species is more less confined to the ǀAi-ǀAis/Richtersveld Transfrontier Park, which straddles the border of South Africa and Namibia.

Protected in South Africa, the marula is a tall deciduous tree best known for its edible yellow-white fruit. There’s little if any truth in the popular legend that elephants sometimes get drunk on the fermented fruit, but they do enjoy eating it, as do many other animals. The marula fruit is the main ingredient of Amarula, an addictive South African cream liqueur that can be imbibed neat with ice or as an alcoholic substitute for milk in coffee, and also make a delicious topping for ice cream.

Where to see it: The marula tree is common in the Kruger National Park and other lowveld regions of South Africa. Amarula is a staple nightcap at many of the country’s safari lodges.

This shrub-like acacia isn’t much to look at, but it is distinguished by the eerie whistling sound it emits in suitable conditions. This occurs when the wind blows through swollen nests made by symbiotic ants at the base of the twin thorns that run along the tree’s branches.

Where to see it: Whistling thorns typically grow in monocultural stands on clayish black cotton soils in mid-and high-altitude savannas of the Serengeti and elsewhere in East Africa.

Among the most characteristic trees of the East African savanna, the umbrella thorn is a type of acacia named for its flat and wide-spreading canopy. The sweet leaves are favored by many herbivores, including gazelles and giraffes, while the timber is often used to make furniture (including, legend has it, the Ark of the Covenant). The edible sap is a source of Gum Arabic.

Where to see it: Common in many savanna habitats in East Africa, Umbrella thorns are conspicuous in the Serengeti’s Seronera valley, where they’re a favored refuge for leopards.

This striking cactus-like tree is a type of euphorbia named for the multi-stemmed crown’s resemblance to a decorative candelabra. The toxic latex was used as an ingredient in arrow poison in many traditional hunter-gatherer cultures, and it is avoided by most animals, an exception being black rhinos, which may use it as a substitute for water in times of drought.

Where to see it: Associated with rocky slopes, the candelabra is locally common throughout equatorial and southern Africa. It is conspicuous in South Africa’s Hluhluwe-Imfolozi Game Reserve and on the Kasenyi Plains of Uganda’s Queen Elizabeth National Park.

The camelthorn is a hardy wide-canopied acacia distinguished by its nutritious ear-shaped seed pods, whose bean-like contents are consumed by everything from squirrels to elephants, and can be roasted and ground to make a coffee-like hot beverage. The name camelthorn is a direct translation of the Afrikaans kameeldoring, an allusion to the fact that the leaves are frequently browsed upon by giraffes (kameelperde).

Where to see it: Widespread in southern Africa, the camelthorn is common in Kgalagadi Transfrontier Park and along the stretch of the Zambezi flanked by Lower Zambezi and Mana Pools National Parks.